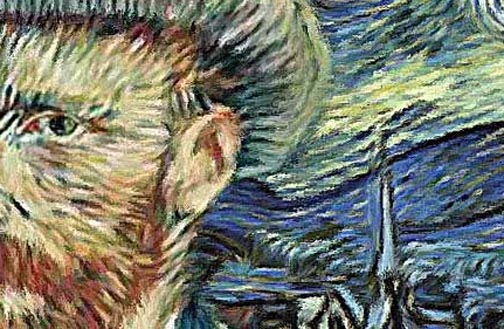 My first exposure to Vincent Van Gogh came when I was seven or eight years old, ill and confined to bed, reading paperback collections of Peanuts comic strips. You see? Who says comics are bad for you?

Readers of a certain age will remember that Snoopy had in his collection, among many other grand things, a Van Gogh which he lost in a doghouse fire on a dark and stormy night. Did Charles Schulz have a Secret Purpose in choosing a Van Gogh to be the painting that Snoopy owned? It wasn't a Degas, or a Lautrec -- or even a Gauguin. It was a Van Gogh.

I think it very likely. Schulz seems to have had a Secret Purpose in everything he did, in every detail that he layered into Peanuts.

All of this is because TCM ran Lust for Life last night. I found it disturbing and distressing on many levels, but also difficult to tear myself away from. Certainly for Kirk Douglas this is the performance of a lifetime. It's very big; huge -- a tooth-gnashing, head-clutching, earth-shaking movement of the skies. If it were any other actor playing any other part, this performance would be miles over the top, the live-action equivalent of a scene in a Daffy Duck cartoon in which Adolf Hitler literally rips up the carpet and chows down on it like a runaway lawnmower cutting down to the ground at seventy miles per hour.

But here's the thing: He means it. And I think it was Billy Wilder who said that a performance can be as big and loud as a fire truck, so long as it is Real and Genuine. That, and Vincent was in life, by all accounts, very much larger than life himself.

I see it as the performance of a man who feels, rather desperately and rather deeply, that he has something to prove. . . and he proves it. This is a brave and daring piece of acting, and also serendipitous casting. Honestly, if you're making a movie about Vincent Van Gogh, Kirk Douglas can not have been the first actor to spring to mind. But somebody thought of it, and the rest is history.

Starry, starry night. Did Don MacLean watch this movie before he wrote his beautiful, sad song?

So many things about Vincent make me sad. I can understand the frustration and torment, but I wish that I shared his drive and passion, his intelligence, if not his supernatural vision.

He worshipped Gauguin, and in return even Gauguin was contemptuous of him. After seeing Anthony Quinn's portrayal of Gauguin last night, I now despise the man. It doesn't mean that I would throw out his art if I were a museum curator, but I might curse him under my breath as I walked past his paintings.

The movie's delicacy on certain aspects of Vincent's life is interesting. Vincent's regular use of prostitutes is hinted at in the gentlest of ways. The ear incident is even more bizarre in real life than it is as Minnelli portrays it.

So much anguish. In the end, I had to walk away. I did not want to watch Vincent die, did not want to watch him famously flame out and murder himself in another fit of despair. His real-life death appears to have been agonizingly slow for a suicide: he shot himself in the chest and took twenty-nine hours to die. But the saddest thing of all is that it took the death for people to look at his work. We live in a world where people close their doors and eyes and ears to creative people until they are dead, as though punishing them for being different. When they are safely gone and unable to appreciate the acceptance -- only then is when the acceptance comes. 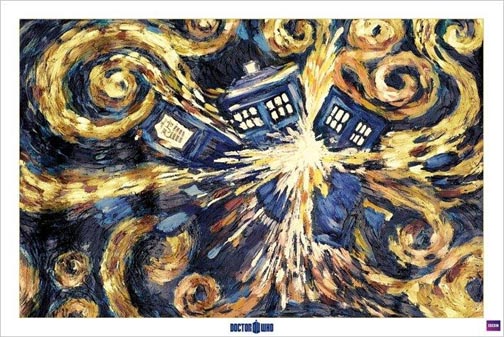 An episode of Doctor Who last season interestingly employed a fantasy of Making Vincent Happy At Last. At the conclusion of an adventure that makes clever use of Vincent's (well-portrayed by Tony Curran) ability to see things that other's can't, there's a really lovely scene in which The Doctor and Amy give him the kindest gift anyone could. The three of them pop into the TARDIS and fly to the present day, where Vincent is allowed to visit an exhibit of his own work, and to hear the curator hail him as the greatest painter of them all.

When they drop Van Gogh back into his own timestream, Amy is anxious to find new masterworks waiting for them back in the present. But nothing has changed. Poor Vincent still shoots himself at the age of thirty-nine.

Some things just can't be undone.