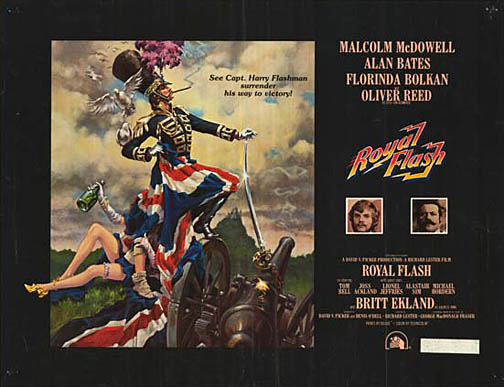 I've been curious about George MacDonald Fraser's Flashman novels for some time. For one thing, my friend J___ is a big fan, and she has wonderful taste in books.  But I always end up thinking, "Do I really want to spend so much time in the company of such an insufferable cad?" and I end up passing.

That curiosity has also extended to the movie version of Fraser's second Flashman novel, Royal Flash, which is where I learned about the character in the first place. I'm a fan of 'seventies cinema -- that was My Time --  and to a lesser extent of Richard Lester, so this week I decided to take a flyer. This would be my tentative sticking of a toe into Fraser's waters.

With a script by Fraser himself I figured it would be faithful, and with Lester at the helm I figured it would be fun. I was largely right on both counts; but even if Fraser wasn't there in the extra features admitting that he softened old Flashy up a bit for the screen, I would have guessed as much. The Harry Flashman in this movie has a lot of bad qualities, but he's more put-upon here than putting upon. And it seems to me that something else is missing as well: the sense of real, not imagined, history. On paper, Fraser is able to place real historical events alongside the fiction. In this movie, there's nothing to indicate, if you didn't already know it, that several of the characters are Real Historical Figures.

I confess that I didn't know it about Lola Montez, and was tickled to learn after the show that her basic story depicted here is a true one, although much and cleverly augmented.

The movie has a terrific cast including Malcolm McDowell as Flashman, Oliver Reed (a personal favorite of mine, although don't ask me ever to watch him in Ken Russell's The Devils -- I won't do it!) as Bismark, Alan Bates and a parade of the cream of British Character Acting Aristocracy, including Hugh Griffith, Alistair Sim (the best screen Scrooge ever), Lionel Jeffries, Michael Holdern and even Arthur Brough -- Mister Grainger from Are You Being Served? -- who has one really memorable line as King Leopold.

So, you know it's well-acted. The other big, big thing Royal Flash has going for it is Great Scenery: the locations are absolutely stunning, and shot beautifully by Geoffrey Unsworth.

As directed by Lester, the picture is. . . vigorous. There's a lot of womanizing and a lot of comedic swordplay (watch Bates make a sandwich during one smashing bout) and a lot of double and triple dealing. The design is delightful and effective.

Royal Flash is good fun, but not a classic. I can't help but feel that it might have been better with just a bit of a sharper edge. The very good early scene with McDowell goading Reed into a losing boxing match is what I wish the rest of the picture was like. Still, it's good to see Lester at the top of his game, before he got sucked into the Superman franchise and gave us the largely dreadful number three.

I don't normally do commentaries, but for McDowell I made a partial exception. It brought a grin to my face to learn that Oliver Reed was every bit as much of a loose cannon as the rumors suggest. That grin was wiped away when McDowell, asked by the interviewer if he and Reed became friends during the filming, replies bluntly: "Oh, no, I didn't want to spend any time with him at all. He was such a drinker."

Did this sell me on trying the Flashman books? Well. . . sort of. I ordered a couple of them for the store and will take a closer look when they arrive.