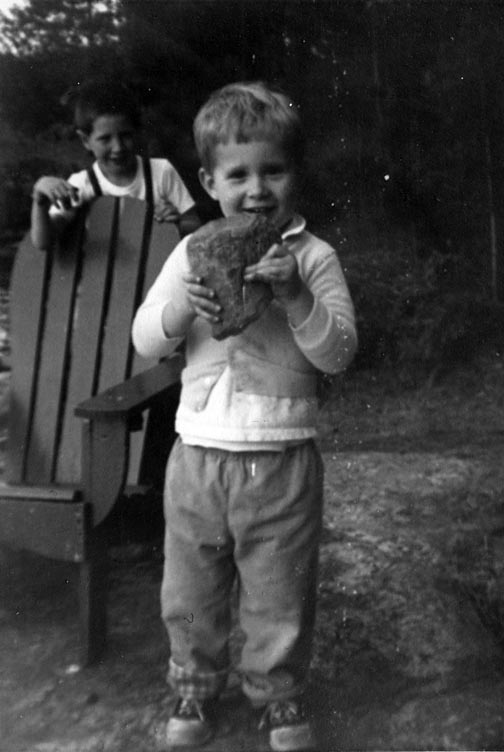 My paternal cousin Brian has been dead for a long time. It was cancer that took him, back in the early '80s; when they cut him open after his death they found it eating away throughout most of his abdomen.

For more than a decade prior to his death, we were not close. But when I was a child and my family lived in Minnesota, all of my cousins factored heavily into life.

Brian was an outgoing and deeply friendly kid; he was also a full-blown Autistic. We didn't have that word back then. We called him "different." He was quite functional, but gangling and awkward, given to strange gestures and stranger modes of speech.

Whereas I was given to silence.

The home movies, my recently completed project that kept me out of depression for a time, in which Brian and I are occasionally seen together, make it clear to me that I was "developmentally delayed." In stark contrast to my sister, I am seen most often in stillness, or being dragged along by the hand. Even as late as eleven or twelve, my run is a clownish mess of flailing arms and legs.

But where Brian was more or less seriously impaired, I was "light enough to pass," if not to fit in with my peers.

That has been a life-long problem, and is probably the reason why I essentially dropped out of life for a while after high school, and why I remain a house-bound introvert to this day.

From the beginning I did not identify with people my own age and sought out the company of adults. When that was not possible, I was the kid who went off by himself to a quiet corner of the playground. My classmates exhausted me. I could not figure them out and quickly got tired of being ridiculed for my apparent shortcomings. "You're so queer!" became the phrase that was repeated to me most often in the sixth grade. At that time I had no idea what the word meant and when it was explained to me I was appalled. How could they think that of me? How could they say those things?

(It's funny, but now I'm acutely aware that I'm still only pretending to be an grown-up, and I tend to identify more closely with young people -- which is awkward because they see me as an adult and are surprised when I don't behave like one, just as I am unreasonably but genuinely surprised when these younger people don't share any of my cultural references. How can anyone never have heard of Pee Wee Herman?)

On the playground I preferred the company of girls because they were less dismissive of me and because I did not share the same interests as the boys, could not play any sport for the life of me, though I tried hard, and was ridiculed for that, as well. Always the last person to be picked for any team, always the one targeted in Dodgeball. I preferred reading and drawing. I preferred making up stories about the physical things that surrounded me, and because my mother was already in the antiques business, I was surrounded by a lot to interest.

After we moved to Maine and the families grew apart, my cousin Brian became an increasingly alien figure. There was an incident that occurred just as his hormones began to kick in.

Hormones are like Town Government Employees coming into your home without warning to turn your life upside down, saying, "Just doing our job, buddy!" This is rough on everyone, but for a full-blown autistic it must have been all the more puzzling and difficult. And so I have nothing but kindness and understanding when I type that he wrote my sister an inappropriate letter, asking for a picture that showed off her chest.

This should have been handled with understanding and allowed to drop. Brian lived half a continent away and could be of no trouble; when no response was coming he would most likely forget it all and move on. But my sister, being the hyperactive and explosive personality that she is, was outraged and demanded an apology. Phone calls were made.

I went to my room and cocooned myself in there; a lifelong habit that is only now changing, and now only because the whole house is my room.

Like Brian, I have suffered from inappropriate and unrequited affections. Fortunately not with family members! But in my teens all the way through to my late twenties, I would meet women who seemed so natural and connected to the world, and so friendly, that I would throw myself at them as if they were my only hope in the world, in what must have been the most off-putting manner imaginable, on the one hand socially constricted and on the other over-eagar. The inevitable results would leave me in a state of crashing despair. I literally could not tell the difference between friendliness and interest, and did not know what I was doing wrong.

When I visited my Grandparents in Minnesota during my early high school years, Brian and his younger brother Dale took me golfing. We spent most of the day together. Brian had not changed at all. He was still the same cheerful, friendly, outgoing but painfully awkward person that he had been as a child; the only difference was that now his bedroom smelled of ripe teenager.

I went home and never saw him again. It was in the early days of the comics, collectibles and antiques shop called Duck Soup that I shared with my mother, that word came of Brian's illness, along with requests for letters, requests for contact, requests for memories. I sent a copy of MAD magazine, one from the sixties that parodied the old Batman TV show, because back in the day, Brian and Dale and all that branch of the family used to come over to our house of a Wednesday or Thursday night to watch Batman on our color TV. Color TV was not Universal then. I thought it might trigger a smile, or a memory.

Then he was gone; and his death was, like his life, so far removed that it meant little to me other than a milestone, just the first of many more to come. This was long before I came to understand that Brian and I had more in common than anyone realized.