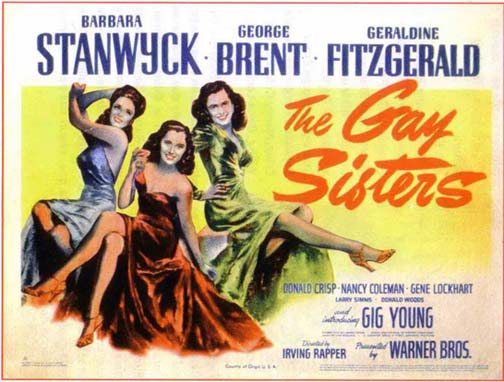 Trust me, there's nothing gay (in any sense of the word) about these sisters -- and that poster is just about the most ridiculous misrepresentation of a movie, ever! None of them are happy -- which, now that I type it, I suppose is the studio's justification for the appalling, unrealistic and deeply unsatisfying Hollywood Ending that its viewers are subjected to before the final fade-out.

I suppose that I'm taking the picture too seriously -- it really is just a Soap Opera at heart. Unfortunately, Stanwyck's presence and the way she commands your attention does lull one into the fantasy that The Gay Sisters is something more. That -- and some of the themes connected with me in Irritating Ways.

In the opening scenes, the Gaylord Sisters lose their mother and father one after the other in Deeply Romantic ways -- but not before the father has the chance to say goodbye to his two weeping children and the third, "sterner stuff" daughter who will grow up to be Stanwyck. I was weeping, too, and hating myself for it, because this bit of childhood trauma is nothing more or less than Cheap Manipulation. . . and I felt the sap for having my buttons so easily pushed.

Then again I was in a vulnerable mood today, and this is a story about a family that loses everything in a bitter legal dispute: everything, including the family home, and ultimately their pride.

George Brent plays the cool SOB who's responsible for bringing down all this ruin, and he does it well.  But of course it turns out that he and Stanwyck have a past, and that his assault on this particular family has ulterior (and highly incredible) motives.

In the end, it turns out that Stanwyck didn't mean anything she said, didn't have any of the honor that she claimed, made the whole family suffer for twenty-eight years for a principle she didn't believe in.

There's a marvelous scene (and song) in the stage play of My Fair Lady in which the Rex Harrison character finally comes to grips with his attraction to Eliza Dolittle, and with the knowledge that he's apparently lost her to to an insipid young fop. The song is called "Accustomed to Her Face," and it ends with a shout and a moan. The shout is connected to a thought early in the piece: "Marry Freddy. What an infantile thing. What a heartless, brainless, wicked thing to do!"

That's how I feel about the ending of The Gay Sisters. Perhaps I'm a bit too sensitive to the issue of losing your parents and then having your home ripped out from underneath you, having been through it myself (the anniversary is coming right up), but I was Really Pulling for Stanwyck and no other ending than having her prevail would have satisfied me. Instead, she Whores herself to the Son of a Bitch who has been making her life miserable.

My sense is that in 1942, the hopes and beliefs of a woman were still considered secondary to the hopes and beliefs of a man. And so the Stanwyck character is made to see that she's Just Being Stubborn, and everything that her life has stood for up until that moment is tossed away so that she can fall into the embrace of her enemy (and not coincidentally, a soft romantic fade out).

Am I the only one in the room who saw the "seduction" that led to the birth of a son as a rape scene?

It might have worked if Brent had any credibility at all as a man who, suddenly and unexpectedly, Actually Cares. But he's been so successful at playing the prick right up to and including the closing scenes, that I defy anyone to Buy It.

My friend BC and I share an expression that we both use fairly often, but which he invented:

"If it were a book, you'd throw it across the room!"