The Wacky World of Web Series. . . 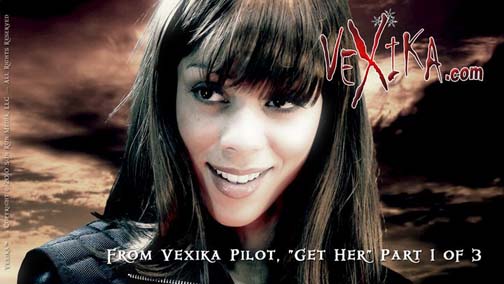 Until quite recently, I thought that "web series" were all talking heads and computer geeks. It wasn't until I learned that my friend DP is acting in one that I realized they were turning into much more, and not until last week that I came to understand how polished and elaborate they can be.

My first exposure to this was Vexika, a sort of SF-ninja series made by a married couple in Arizona, who have erected a sizable green screen in a corner of their living room and shoot against it on weekends. Drawn to their site by a Facebook ad, I was impressed with what amateur filmmakers can accomplish on a technical level with consumer-level computers, cameras and software.

Unfortunately, Vexika is not just bad, it's embarrassing. The only thing that it's "about" is posing and self-regard. Miranda Stewart, the star of the piece, is certainly photogenic (her husband Dan particularly likes to linger his camera over her black-vinyl-clad behind), but she has only one expression: the one you see above. She's given virtually no dialogue, and her character is beyond that of a cypher: Vexika is nothing more than a body to swing a ninja sword around and engage in some (very lame) ninja moves. Dan Stewart, who is the "writer" and director, also plays all the other roles: an army of clones sent out to kill Vexika (they have even lamer ninja moves than she does). That's it, that's the whole plot. The first story is aptly but unimaginatively called "Get Her," and in five minute installments Vexika smiles like that and dispatches them, singly or in groups. There's a lot of standing around. There are some lame attempts at comedy, and even lamer attempts at pathos (the army of clones who must "get her" also, apparently, love her, and one of their number is unhappy with this situation).

How they can love her is not made clear. There is literally nothing there to have any feelings about whatsoever. Really, the only question of note that Vexica raises is, how does a chubby computer nerd manage to get hitched up with a "smoking hot babe" like that?

Somewhat better is Spellfury, a sword-and-sorcery fantasy about a girl elf with a magic sword and an evil wizard who wants to steal it. True, the acting is every bit as lousy as that on Vexika, but Spellfury is essentially a comedy, and you do sense that the young people involved are having fun with it. There's also a significantly larger cast (which deflates the narcissism of Vexika), and a clever blending of live actors and puppets. I can't say that I'm waiting for the next episode at all, let alone with baited breath, but I did find the one episode that I watched (number 11, available here at YouTube) amusing and insouciant for an amateur production.

Of the three web series that I checked out, best of breed was easily Western X. It has the highest production values (much of it is shot in a real western ghost town, the costuming is outstanding, and much of the cast seem really to be grizzled old Rough Riders) and the closest thing to a compelling storyline. What gives it away as an amateur production are the too-long Pregnant Pauses where nothing much is happening and nothing is being said, just cowboys and frontier women staring at each other ominously from across the dusty trail. You can check it out here.

The message that I came away with is not that any of these shows will change the entertainment industry, but that the entertainment industry has changed and is changing and that, as blogging made it possible for any idiot with a keyboard (including yrs. trly.) to become a pundit and a critic, any idiot with access to a camera and a computer and editing software can create their own series or movie and easily make it available to the larger world. Episode 11 of Spellfury has had over 39,000 views at YouTube, not an insignificant number for an outsider production.