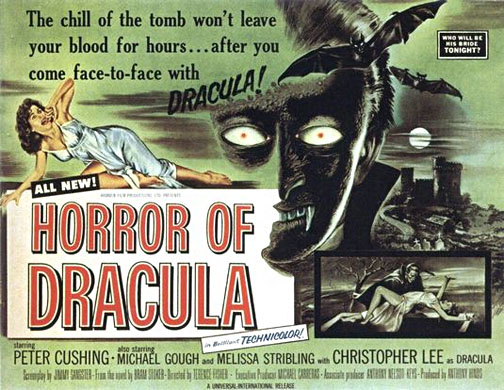 The bug that put me into bed for five days and is still working its will on me more than a two weeks along also affected my emotions and robbed me of the ability to do anything more productive than play computer games and watch movies.

Monday night at eight I still had no idea that Pooky was dying. I sat down to watch Horror of Dracula on TCM, my first time.

I have a problem with Hammer in that they're too gory for me, and the studio has a lot to answer for in their part in establishing that trend. That said, being just the first in the line, Horror of Dracula wasn't nearly as gory as I expected it to be, although it still has some shocks that pack a whallop. (Fortunately, I had my thumb poised over the MUTE button on my remote at all times, and was spared the shrieks of the dying female vampires! Silencing movies like this helps take some of the bite out of them.)

And that's just it, really. Even the mildest Hammer chillers (1963's Kiss of the Vampire is one of  their best) don't really impress me as being horror movies at all. They have no interest in establishing mood, sending a shiver down your spine, or thrilling their audiences with the chilling mystery of what lies around that next dark corner. They are shock thrillers, pure and simple, designed to deliver swift jolts and to outrage the sensibilities. By definition, as audiences grew familiar with their tricks, the jolts and shocks had to go further and further and become more and more outrageous in order to have any effect.

Horror is about the mind and the emotions; shock is just about making you jump and cringe. This is why Horror of Dracula is where I get off the Hammer bandwagon.

The plot takes some intriguing liberties with Stoker. Jonathan Harker is changed from a real estate agent into a somewhat inept vampire hunter (before he's changed into a vampire), and the entire underlying theme of the novel (that the Carpathians are drying up for Drac and his need to relocate will bring pestilence and plague to England) is scrapped. It's not clear to me where Dracula's castle is located in this film, but it seems to be only a short carriage-ride away from the Harkers, and Drac's motive is reduced to revenge for the death of his vampire bride.

In this version, Drac burns away nicely into ashes and dust. It's the movie's best scene, and the director wisely opts for a fast fade-out.

I'm astonished at how little Cristopher Lee has to do in this movie, and how little he brings to the part. Really, he gets one early shock scene (the effect of which is somewhat reduced because it's become the most widely-reproduced still from the movie) and the climactic bit of snarling before Peter Cushing lets the sun shine in. OK, he's tall; but in no way do I see this as an iconic Dracula. Even Jack Palance was better in the made-for-TV Dan Curtis version.

If Hammer's Count continued to be this much of a cypher in the rest of the films they named after him, then no wonder Lee disliked playing the part!

Polanski's The Fearless Vampire Killers is so much better!

On a side note, I vote that the SyFy network change it's name to the Torture Porn network. But then, all the cable stations seem to be running horrible stuff around Halloween this year. Only TCM is keeping it both tame and in the proper spirit. Everywhere else it's slashers and flesh-eating zombies and worse. Since when does American Movie Classics run disgusting crap like Jeepers Creepers 3? I'm having a hard enough time getting my enthusiasm for Halloween back this year (being sick is part of the problem) without having to zoom through the stations every night trying to avoid the degrading trash that typifies the modern Horror film.