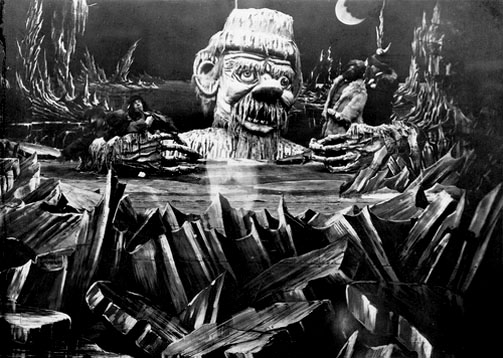 Ever since the seventh grade, when the photograph above met my eyes in a hardcover volume on the history of cinema, I have wanted to see George Méliès’ Conquest of the North Pole. You might say that it’s been on my Bucket List before I had a Bucket List, before the term was ever invented.

What was I doing in the Thomas Memorial Library in the seventh grade looking at a volume of film history? I might have ended up there on my own hook, being the kind of kid that I was, but the truth is that my seventh grade history teacher gave us the assignment to write a paper on “something historical,” and we were to choose the subject ourselves. At that time in my life, “history” was nothing more than a somewhat uninteresting abstract to me... I don’t think any subject was as poorly taught in those days, and with the tools at our fingertips I don’t think that any subject has the potential to be taught better today.

On the other hand, the movies did interest me, even then. Nothing interested me so much. So I suggested the history of movies and somewhat reluctantly my teacher agreed.

Certainly not in grade school (and maybe not at any other time), did I ever pour myself into a research project with such enthusiasm. There were several really good books out at the time, including the classic on Disney animation, and I spent hours at the library learning about Mary Pickford and William S. Hart and D. W. Griffith and Lon Chaney, and the pictures, O my brothers and sisters, the pictures absolutely had the power to transport me into that other world, that other place and time.

I probably would have wrinkled my nose at the word “romantic” in those days, but that’s what it was, I was absolutely being Romanced by the  unsurpassed power of silent cinema over the mind.

Well, I wrote my paper and from my point of view it was a smashing success. I learned a lot. The grown-ups didn’t quite see it that way. When my parents read the piece, they seemed dismayed that it focussed on pure cinema history and “suggested” (we all know what that means, right?) that I add material relating to the impact of movies on culture as a whole.

I couldn’t have cared less, but I faked a half-hearted page or so along that line and tacked it on at the end. Of course that was the part that my history teacher liked the best, though he thought it was under-developed.

Me, I still could care less. It’s not about Aunt Edna doing up her hair to match Hedy Lamarr’s. It’s about the movies.

And ever since I saw that picture up there of the Snow Giant looming over the ice and menacing those polar explorers, Conquest of the North Pole has been one of those Holy Grails of movie-watching for me.

It has proved a danged tough quest to fulfill. The movie is simply never screened, and rarely, if ever, included in compilations. Compilers of silent collections fall all over themselves to include Méliès’ A Trip to the Moon, and to be fair, that probably is his most representative work, but come ON, guys... we’ve seen that one and seen it and seen it... Until now, the two or three DVD collections devoted to Méliès’ work have been dowdy affairs, utilizing rank, public-domain prints, and rarely including any significant material that we haven’t seen before.

But here’s why it really is (sometimes) good to be alive: from time to time, Good Things Do Happen, and when Good Things Happen, it really does radiate outward into the Universe and cause Other Good Things to Happen. In this case, with Scorsese’s Hugo in production, what did the good folks at Flicker Alley decide to do but release a major, and I mean major, definitive, gorgeous five-disk boxed DVD set of the man’s work, George Méliès’, First Wizard of Cinema. Look upon this set, y’all, and sigh heavily. The prints are the best I’ve ever seen. Some are pristine. Many are from hand-colored originals. Did I say it was five disks? Most of these films have not been seen in a hundred years!

Conquest of the North Pole, being one of Méliès’ last works, was waiting for me, nestled there on disk five. I was a good boy. I waited for it, going slowly through the first three disks, enjoying everything, savoring the build-up. Patience is a virtue. And I was very, very patient.

Then I couldn’t stand it anymore and threw the thing in the player.

One of the things that the boxed set makes clear, perhaps disappointingly so, is that Méliès’ didn’t have a terribly broad range. With very few exceptions, his films can be divided up into about four different genres, and he repeated these genres over and over again. One of these genres could be called “The Amazing Voyage.”

And the films in this category are all of a piece. Conquest is no exception. A group of luminaries get together and decide to travel to a Fantastic Destination. A marvelous means of locomotion is devised. It is built through spectacular and clever means. The voyage is undertaken; magical things occur along the way. The destination is reached! In a fantastical landscape, the valiant explorers are set upon by the whimsical and terrifying denizens of this distant world. Through a series of improbable events, the adventurers are swiftly returned home. All is well.

If you’ve seen A Trip to the Moon, you’ve seen all of Méliès’; and yet you’ve seen none of him. Conquest follows the blueprint exactly, but at half an hour it may be his longest film; it certainly is one of his most spectacular, combining all his techniques and themes to an extremely pleasing effect. I did not feel let down by Conquest, not even a little bit; and I watched it again a few days later.

Buffalo Bill is one of the luminaries who goes a’flying in the metal bird this time. In the extended voyage sequence, hundreds and hundreds of airships vie spectacularly for the skies. The airship does not just reach the stars, it visits the Zodiac -- Méliès’ was an incomparable romantic, which perhaps helps to explain the depth of his fall shortly after this film was made.

But of course the triumph, the main setpiece of the film, is that wonderful Snow Giant. The photograph does not nearly do him justice. By equal parts menacing, impressive and charming, he captured my imagination all those years ago, and does not disappoint “in person,” so to speak. Rising out of the ice, fuming pipe in mouth, gesticulating wildly, gathering the explorers in his arms and chowing down on one of them, he is the Noble Father of all screen monsters, the first of the silver screen’s Great Giant Beasts. With his rolling eyes and wiggling ears, he may strike a modern audience as something belonging on a Macy’s Parade float; but think of when this was made, and think that this is the vision of one man, working well before monsters of this scale had ever been attempted by anyone else on screen. This is El Monstro Numero Uno, and I think he sets the bar at a good high place.

I am so happy to meet him at last. And happy also, that Méliès’, whose story is one of flourishing, being forgotten, being rediscovered, and being forgotten again, has the opportunity to come into our homes and introduce us to himself and to his work. One thing is quite evident from his films, repetitious though they may be: the man was extremely vital in his youth, filled with enthusiasm and joie de vivre. No one else ever had such stars in their eyes.