Pages You Can Turn 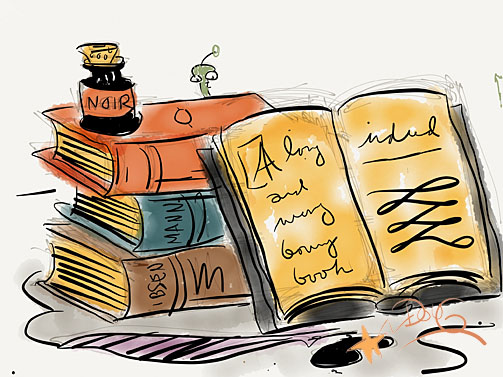 As a last hurrah before my driver’s license went “poof” at the stroke of midnight on Thursday morning, I drove out to Unity College and lunched with M____, the director of the Library. It was a tonic to go back and visit everyone and see the place again after I don’t know how long, but oh my word, they have been busy making changes!

The basement, which was formerly an appropriately dank, unfinished vault-like space housing an arcane but rather delightful backlist of old magazines, has been remodeled completely and now is the bright new home of the fiction and biography sections. Upstairs, what was the fiction and biography section has become an extended computer access area -- and if you’re into that sort of thing, you should see the new hardware they are in the process of installing. It’s more than enough to give anyone Computer Envy, and guess what? I madly, deeply, truly got a kick out of little Unity College blowing pompous old goliath Colby right out of the water in this regard -- and not even close. Colby’s student access computers now look like tinkertoys compared to what’s available to the students and the community patrons of Unity College.

Of course all this means that everything has to be moved, so right now the library is in a state of kerfuffle. With manpower in short supply, they’re relying on movers to shelve the books -- come the fall, I foresee student workers busily shelfreading as they attempt to correct the inevitable mistakes.

Unfortunately, M____ is having to weed more books from the collection. A few years back, I would have kicked against this a lot more than I do today. The sad truth is that needs are changing at college libraries and with limited space and resources something has to give. Some of the books in the collection have not been checked out or looked at in decades. Every year it gets harder and harder for people like me to argue in favor of keeping them.

And aside from that, every time they weed I make out like a bandit. I didn’t know when I went out there that I’d be coming home with a HUGE box and a shopping bag both stuffed to overflowing with books, but you won’t hear me complaining one teensy weensy little bit. L___ was only going to charge me three dollars for the lot. I handed her a fiver and told her to keep the change. It’s the best five dollars I’ve spent in yonks.

There’s still a lot of books left if you find yourself in the area -- and they’re not done weeding yet.

Although I am finding myself easing on down the road into the technological paperless future, I am not so far along it that I have forgotten the pleasure of sorting through a big pile of newly acquired books! D’you want to know what I scored? After all, nothing is so revealing about a person as the music they listen to, the art they love and the books they read.

Well -- first of all, I brought home the Short Story Index for 1995, because I’m in it.  This was published annually by the H. W. Wilson Company, and it lists every short story published in this country during that year. In 1995 there were 4,619 stories published in 230 collections and 65 periodicals, and there I am right on page 200, second column, about an inch and a half down. It’s one of my very few claims to fame. I just now proudly added it to my very small corner shelf of publications.

In the category of “miscellany,” here’s something to make my friend BC jealous: a compilation of scripts from the Bob (Elliot) and Ray (Goulding) Show. I’m not sure how well Bob & Ray will translate to cold hard print, but I’m glad to have a record of their very funny work between two covers. Somewhat dryer but (perhaps) no less interesting is a thick volume called The Comic Imagination in American Literature. Will it suck all the humor out of humor? Only reading will tell. And how could I pass on a hardcover edition of The Rolling Stone Illustrated History of Rock & Roll? I ask you.

In the “A Little Light Reading” department, I came away with a 1919 edition of The Four Horsemen of the Apocalypse by Vincente Blasco Ibanez. I never knew it was a book. A novel. Pretty high-handed title for a novel. And for those days when I just don’t know what to do with myself, I picked up the entire 15 volume set of The Cambridge History of English Literature, 1967 edition. As I dip into it, here and there, I find that it’s surprisingly accessible and interesting. Well, I say that now -- but after about three volumes I’ll bet that I feel otherwise...

When I’m done feeling all high-falutin’, I can relax with some SF. On a lark I picked out three volumes by Poul Anderson, two by Isaac Asimov, and a collection of short stories by the Master, the recently lats and lamented Ray Bradbury, the latter in one of those terrific Bantam paperback editions that I remember so fondly, with a sketched portrait of Ray juxtaposed against a painting of weird and imaginative landscapes.

Depressing European Dramatists did not go unscathed in this round of weeding, and I selected some Ibsen, Strindberg, Thomas Mann, and an Anthology of (no doubt deeply angst-ridden) German short stories and novels. Why not? I do enjoy Ibsen in a good translation.

Among the other writers represented in my stack are Conrad Aiken (Joan’s father. You don’t know Joan Aiken?  The Wolves of Willoughby Chase, Nightbirds on Nantucket -- good strong gothic adventures for young people), Sherwood Anderson, James Baldwin and John Cheever. I scored five of Willa Cather’s lesser-known books, a Penguin anthology of stories set in the old west, and Caleb Carr’s The Alienist. What the hack, I mean heck.

Forgotten Novels are a fascination of mine. They keep me humble. I brought home three of them that all looked worth the reading: Greenmantle by John Buchan (didn’t he also write The Thirty-Nine Steps?), The House in Paris by Elizabeth Bowen, and Drums by James Boyd. Presumably, these books used to be popular; presumably, people used to talk about them; they may have been The Help or the Caleb’s Crossing of their day, now unremembered by anyone living -- as most of the bestsellers of today will be in twenty or thirty years’ time, perhaps less. We write the books, the publishers shovel them out into the maw of the readership where they are digested (or not) and pass through the system into oblivion like everything else.

Into oblivion some may go, but a few linger on in the hearts of a handful of ardent followers. I was able to find obscure and out-of-print books by two of my favorite writers at the Unity book sale, and you can bet I snatched them up greedily.

First was Anthony Burgess, he of A Clockwork Orange and Earthly Powers, the latter of which is a genuinely great novel. I found copies of Nothing Like the Sun (an early novel about Shakespeare), the ENTIRE Enderby cycle (four novels in three covers) and a first edition (!) of Napoleon Symphony.

But the real prize came out of the downstairs storage room of the library. I know where the volumes came from because I’ve been coveting them since I worked there all those years ago.

Joyce Cary is one of my top five favorite writers, right up there with Faulkner and Robertson Davies, but try and find his work. It’s very difficult. The last time I looked, even A House of Children had dropped out of print; only his great first trilogy that has The Horse’s Mouth as its focal point is still widely available.

I’ve written about Cary elsewhere. I didn’t discover him for myself; a kindly High School English teacher saw that I was miles ahead of the class reading level (well, it wasn’t hard; she had us reading Brian’s Song  for flaming sakes. Green Eggs and Ham has more literary value) and pushed The Horse’s Mouth into my hands.

I didn’t appreciate it at the time. I was kind of a stuck-up, straight-arrow kid, and Gully Jimson is so very not a straight arrow. I was being confronted with a first-person narrator who was the polar opposite of everything I’d been brought up to believe was How You Should Behave. I didn’t know what to make of it.

I’ve changed a lot since then.

And I’ve glommed everything by Joyce Cary that I could get my hot little hands on. Which is not a lot.

So you can imagine how I bit my lip when TEN hardcover volumes bearing his name surfaced in the mountain of books for sale. Yes! Mine! Ten!  Coming home with me!

I already had paperback copies of his second trilogy -- that’s OK, I get to upgrade and pass along my paperbacks to some deserving soul. That still left SEVEN completely new-to-me and long out-of-print Cary novels coming along into my pipeline of books to read. An American Visitor! The African Witch! Mister Johnson! A Fearful Joy! To Be a Pilgrim (part of the Jimson trilogy I’d never managed to lay my hands upon)! Castle Corner! The Captive and the Free!

All in all, a good day’s work, I’d say... and with my license now officially turned into a pumpkin drawn by three white mice, it looks like I may actually have some time to devote to reading real, printed-on-paper books again...