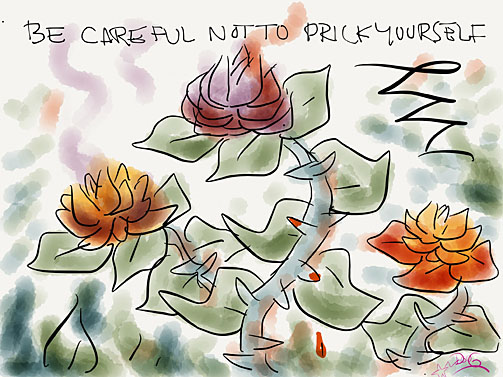 My father and his wife are coming to dinner here at the Duckhaus on Tuesday night. I dread this with a dread that runs thick and black and gums up the gears of my clockworks so badly that even the finest butter cannot make them tick. But there were things Sam Spade had to do because Archer was his partner, and there are things I have to do because he’s still my dad, and I won’t have him forever.

Ever since my mother died I think we’ve both been trying extra hard to put old grievances behind us and make the relationship work. But for my part, I’m getting tired. Yes, relationships take work. But they shouldn’t take this much work, and the work shouldn’t be so bloody unpleasant.

Late in my days in the outpatient program, I realized that we really don’t have a relationship at all. What we have is a baseball game where the two teams are facing in opposite directions, wondering why no one ever scores a run.

I have these reactions because after all these years, I know what’s inside. And I know that it’s just going to make me angry. My father lives in the Land of the Blind Egoists and does not hesitate to stomp blindly through its thorny undergrowth no matter whose feelings he scrunches and squishes. In fact, he has always had a way of making others feel like the Guilty Party for Being Squished.

I’ve seen the way that real families interact when they get together for dinner. There’s a nice buzz in the atmosphere, everyone’s milling about, there might be one grumpy uncle in the corner but the rest are all making the scene in one way or another; maybe the television’s on, two or more people are working on the dinner, another is setting the table, the atmosphere is congenial, the topics of conversation are light and may include anything from the kid’s soccer game to the noisy neighbors to the movie they watched last night.

Family gatherings have never been that way when my father was involved, and now that it’s just my father, his wife and me, they are about as enjoyable as the Salem Witch Trials.

Instead of a cheery buzz, the atmosphere is might be similar to that of the Law Offices of Mordant, Shiver, and Rigor Mortis, L.L.C. on a day when an insignificant lower level member of their staff (me) has performed in a particularly disappointing manner and must be taught a Life Lesson, usually by means of an extensive narrative from the illustrious career of the senior member.

Never mind having the television on, Dad can’t stand that, because it gets in the way of his talking.

I’ve written about my father’s habit of monopolizing every conversation before, several times, on the blog, so won’t belabor it here. Let’s just say that when he does allow me to speak, it’s usually quite suddenly in the middle of a speech that I may not have been paying the fullest attention to, and then he’s usually attempted to limit my topics by asking a question, often one that has no connection to my reality. Instead of a lifebouy, he tosses me a black hole.

When I am given the free opportunity to speak, suddenly the entire world falls silent and shifts its focus. My father crosses his legs, turns his piercing blue eyes on me and looks at me as intently as if I was a culture on a slide and he was looking down the length of a microscope. This is not the way to have a friendly, nice, enjoyable, relaxing conversation. This is the way to make me clam right up.

The last time we had lunch together I was hung over and so I had the alcoholic’s nerve to stand up to him, in the alcoholic’s inappropriate way. I actually shouted at him, right in the middle of the restaurant, “Why are you staring at me? Stop it! You’re making me nervous!”

It didn’t do any good. It never does any good. He’s been to my house one time since then, and he talked and talked, and said his piece, then opened the floor for my response. I do not play by those rules, and so passed. Then he left.

I sometimes think it’s time to give up on it completely, because it is hopeless, “Rilly it is,” as Katherine Hepburn would say. He’s never going to change, and it’s never going to hurt any less.

But then I think of how suddenly and unexpectedly Mom died. And that still reduces me to tears, even just now. It’s been two years and all the evidence aside it still feels like something that happened to someone else. I still wish that I could talk to her every day.

Dad’s a year older than she was. I won’t have him forever. He annoys the living crap out of me. Even the good moments that we have are Strictly Formal and Distant. And yet I know that he loves me. Maybe that’s why I feel so guilty.