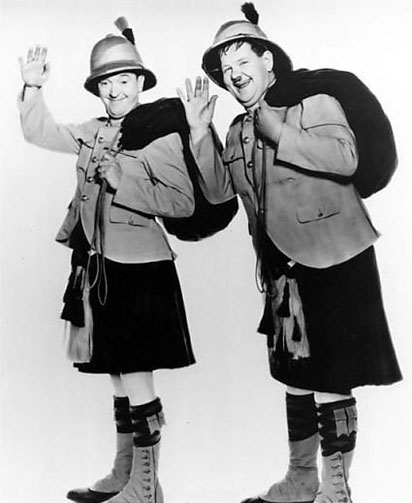 With Thicker Than Water, Laurel and Hardy reach the end of their short subject career and embark upon a features-only policy from which they never look back.

Although they had several feature-length pictures under their belts and the masterful Sons of the Desert  proved that they could handle the format as well as anyone, the boys -- and their support team -- must have felt apprehensive at this leap outside of their comfort zone: neither Thicker Than Water nor Bonnie Scotland, their last short subject and first feature under the new policy, represent them at the top of their game. On the other hand, both see the team trying New Things and playing with film: in  Thicker Than Water, scene changes happen when Stanley runs to stage left, grabs the edge of the film and drags it across the frame; in Bonnie Scotland, when the boys make their entrance, a blacksmith hammers out their signature tune “The Cuckoos” on an anvil!

It's not until the final minutes of Thicker Than Water that the meaning of the title suddenly snaps into focus. And it’s fitting that the last thing that Stan and Ollie do in their last short subject is to transfuse each other so that Stan becomes Ollie and Ollie becomes Stan.

Blood brothers Laurel and Hardy are indeed, and as I work my way through the new box set that finally brings all their sound films back into print I’m aware that this is a sad milestone. There’s still some wonderfulness ahead, of course, but for me the short subjects are bread and butter for Laurel and Hardy, their Home Sweet Home. Better writers than I am -- notably William K. Everson -- have published whole books on the subject of what they did and how they did it. Pick your metaphor: in structure it was either symphonic or sexual, often involving excruciating buildup and explosive release. Stan and Ollie were proof of the pharmaceutical notion of laughter as the best medicine: if you think your life is difficult, by all means immerse yourself in Laurel and Hardy. Their shorts are examples of almost Biblical trials piled upon the shoulders of a pair least equipped to deal with them.

Above all, I think more than any of the other comedic teams, you like Laurel and Hardy. You root for them. There’s nothing mean-spirited about them.

Looking back over the run of their sound two-reelers, the ones that stand out as favorites for me are Brats, Hog Wild, Laughing Gravy, Any Old Port , of course The Music Box, Their First Mistake and The Live Ghost. Note that I don’t list some of their very best films -- Tit for Tat et al -- as being personal favorites. Personal is what it is.

I don’t think, for example, that Any Old Port is widely considered to be one of their best -- but I’ve seen it a million times and could watch it a million more. My father bought a copy of this on 16mm film way back in the day, and we screened it at home many, many times. That alone would make it special. But we get to see the boys in an unusual role as Actual Heroes, stepping in to rescue Jacqueline Wells from the loutish affections of inkeeper Walter Long, and when they succeed their troubles are just beginning. Even in the second half, when an easy solution seems to have presented itself (well, okay, perhaps it’s not such an easy solution so far as Mr. Laurel is concerned) -- thats when the chickens really come home to roost. It’s part melodrama and part comedy, and the twenty minute runtime is just perfect. I screened it at one of my movie nights here at home just recently, and C___, who is avowedly not a Laurel and Hardy fan (women rarely are, and there’s a reason for that), laughed as long and as hard as the rest of us.

Mr. Laurel and Mr. Hardy often found themselves standing before a judge, usually for no specified reason; “vagrancy” was as specific as it got.  Just as often they wound up behind bars, on the lam, or in a situation designed to protect them from the law -- the French Foreign Legion being a very typical example. I take comfort in this. When my turn comes to stand in a courtroom, I will imagine Stan and Ollie, and Buster Keaton, all standing beside me, with their hands on my shoulders, offering me support.

Is this not, in the end, what comedy is for?