A Gothic Herbal Ephemera, or, Deadly Dull vs. Plain Deadly 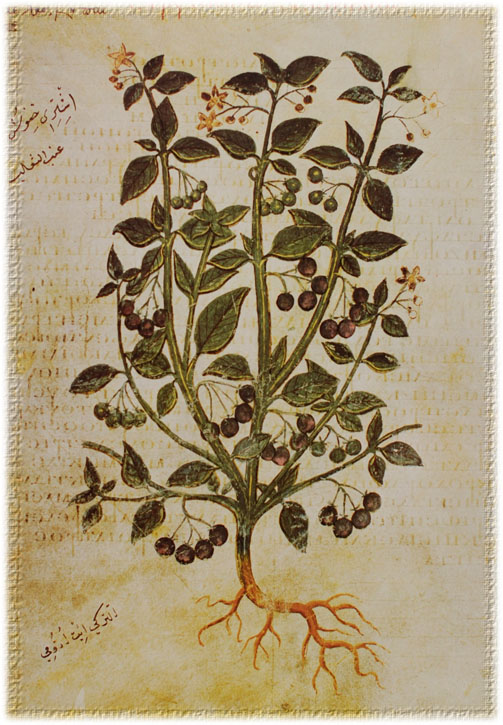 On the whole I did well selecting New Music last month. I pat myself on the back. Buying music sight unheard so to speak can be a real hazard, and to be as happy as I am with as much of it as I am is kind of remarkable to my way of thinking.

But you can’t win them all, and there was indeed one weak link in the chain: The Deadly Nightshade Botanical Society, a band with a name so good that it powered me right through the sample tracks and practically forced me to press the BUY button.

Alas, the name is the best part. No, they aren’t bad, by any means, but they aren’t good enough to give me any particular reason to recommend them. I’ve tried listening to their album, Brand New Antiques, several times, but only takes about three songs before I’m  ripping it out of the player thinking to myself, Okay that’s about enough of that...

They sound a little bit like 10,000 Maniacs without a pulse. I can definitely see them playing in some dreary little coffee shop where all the patrons wear smoked glasses, and pasty-faced gentlemen in overcoats sit waiting expectantly for someone who never shows up.

(which reminds me of a cartoon book that I read a long while ago, called How to Be a Non-Conformist. It was specifically about the Beat generation, but it could apply just as well to the Goth and Steampunk crowd or at least certain elements of that crowd, the point being: if you are busily following rules that someone else sets out for you about what to wear and how to dress and act, even if those rules run contrary to those of so-called “mainsteam” society, then you’re not a non-conformist at all -- you’re just another kind of conformist following a different set of rules and regulations made up for you by other people)

Anyway. The DNBS. To my ear, their music excites neither the intellect nor the emotions. It’s not even good walking music, too distant and lifeless. The girl singer has a nice clear voice and the band has a nice clear sound to match it, but after one song it all sounds pretty much the same. With a name like that you’b better deliver the goods, and of course you may feel completely differently about it than I do, but all they delivered for me was a Ho and a Hum.

Speaking of Deadly Nightshade, I was hugely disappointed this week when the berries on the nightshade plant in my back garden finally began to ripen -- and instead of a lovely blood-black, voluptuous blue-purple, they filled out in a bright tomatoey red.

I knew that this was bad news, and some more research confirmed it: this means that my plant isn’t Deadly Nightshade after all, as my lawyer told me last year, but Deadly’s much less toxic cousin Woody Nightshade. Woody is still poisonous, he’ll make you sick and put you in hospital for three days, but he won’t kill you.

This is a real kick in the teeth on a couple of levels.

But “Woody Nightshade” -- heck, that’s nothing. No Coolness factor whatsoever.

Gah! It even sounds wimpy. It sounds like something out of freakin’ Toy Story fer crine out loud.

And to put the decidedly non-toxic frosting on the cake, there goes my Escape Plan. I had it all figured out. I’d done all the research. I was ready to harvest my plant, grind it up with a mortar and pestle, bottle the results and set it aside for a rainy day, just as soon as enough of the berries ripened. When the time came, it would have been swift and certain.

Now? Now I have to figure out something else, and there just aren’t any other Final Exits I know of that are as elegant as this one would have been.