Back in the Strato-sled Again 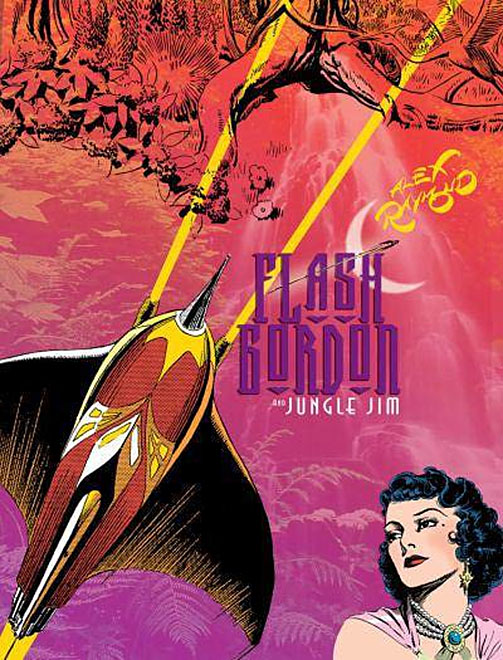 Well, not here. I haven’t seen my copy yet. But it’s out. It’s published. And aside from being A Good Thing on general principles, it has a profound personal significance for me.

The Library of American Comics’ Definitive Flash Gordon and Jungle Jim Volume 2 is a gigantic, lose-yourself-in-its-pages volume that reprints Alex Raymond’s space fantasy classic along with its brother strip just as they originally appeared in the Sunday pages of the Hearst family of newspapers back in the distant world of the ‘30s, all those years ago.

If you’ve ever seen even one of the LOAC books, you know that these folks do it up right, and then some: vintage newspaper comics have never looked so good, or been such a tactile pleasure to read. I’ve waxed enthusiastic about their Little Orphan Annie and especially their King Aroo volumes here on this blog, but Dick Tracy and Bringing Up Father are also notable favorites, and if you visit their website you’ll find that this just scratches the surface. I can personally testify that Mullaney, Canwell and Co. have been busy.

But I’m especially excited about this release. Why? Because I’m in it!

Yes indeedy do. After a publication hiatus that is far longer than I care to think about, I am Back in the Saddle Again, thanks to a friend who thought of me when he could have gone to dozens of equally, if not better qualified writers. Not to mention writers who would have come with a lot less Personal Drama.

I was offered the gig to fashion a piece about Universal’s great Flash Gordon movie serials as part of the introductory material for this volume, and although I’m sure that Associate Editor Bruce Canwell would tell you differently (yeah, he would), from my particular angle of repose I needed relatively little coaxing before I was all over that assignment. OK, I turned it down at first, but I turn everything down at least once.

For Flash, Bruce hardly had to twist my arm at all. In fact, I got carried away, ran way over the allotted word count, and Bruce had to jump in heroically, Flashlike, and wrestle the Octosac, I mean the piece, back into line.

I’m told that it was cut even further before the publication; oh, well. I wear many hats as a writer/cartoonist/designer, but when it comes to my enthusiasm for the Flash Gordon serials I am a writer first; plus we were able to dig up some interesting material for the piece, much more than i expected. So, not being paid by the word, my hope was to provide LOAC with as much bang for their buck as I possibly could.

On the other hand, I do understand the needs of the production line, having spent many years working in production-focussed design jobs. When it comes to packaging the books, Editor and Designer Dean Mullaney  is a designer first. I mean that in the larger sense, really: The Library of American Comics definitely has a Grand Design and Lofty Goals, and it’s the larger picture that matters here, not my ego or my silly little piece, which I had fun writing anyhow, and which still exists as I wrote it here on my hard drive.

So however it looks when the stork lays it down on my doorstep, it’s still my baby and it still has my name on it and I’m still excited to have a byline again after Tao knows how long.

How excited am I? Well -- this borders on being an inside joke, but I’m so excited I can hear Freddie Mercury in my head yowling “FLASH! AH-AHHHHH!!!”