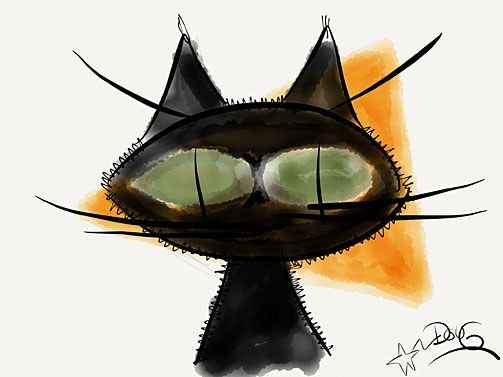 Am I a Real Boy? That is, am I a writer/cartoonist/designer or am I just unemployed? The jury is still out on that (remind me to stop using that expression. It raises the ugly memory of recurrent nightmares as October approaches, dragging my court date along with it); either way, the overwhelming fact of life right now is that my body gets to make its own schedule without any interference from Morning People, the outside world, or even my own better judgement -- something it has been longing to do for years and years.

And so I was up until after three AM again for who knows how many days in a row; when I woke at eight this morning, it was just after the middle of the night for me. Still, pussycats must be fed and antidepressants must be taken on their usual schedule or Bad Things Will Happen to me. And so, bleary-eyed, I pushed my feet into the rotten pair of slippers that trip me up every few yards, marched downstairs to do my chores, then marched right back to bed and crawled between the sheets. The rain and humidity had made everything clammy. Still, Honey joined me and curled up between my chin and shoulder.

It wasn’t so much a dream that I had as just a picture. I saw, quite clearly, my ex-cat Pooky sleeping in my bed, right in my spot, all curled up, the way that she used to all the time, on the sneak, when she thought I wasn’t looking, when I was asleep or when I was out of the house.

When I woke again the image stayed with me, and I remembered that it is now almost exactly a year since she died. Maybe not a year to the day, but certainly a year to the week.

Another reminder of the strangeness of all things.

And of how quickly time passes.

That cat made my life a misery with her incontinence; it wasn’t her fault, but she dribbled and dripped excrement absolutely everywhere all over the house, and the places that she slept became toilets, including my bed. I had to cover every piece of furniture with towels and newspapers. I was always chasing her out of my bed. When I got home from work, she howled and yowled at me like a harpy until I got her food down.

And yet I cared for her and considered it my duty to do so in the wake of my mother’s death, and as she was dying I sat beside her in the porch doorway and stroked her fur. I do still think of her from time to time, and somehow, against all reason, I do sometimes miss her. But how odd to have that picture in my head, out of the blue on this particular morning.

I sat up in bed and opened my tablet to make a note of the thing in my journal, and the little program that generates daily Creative Visualization thoughts made its alert sound at me. When I clicked on the program, this is what it said:

“The pleasantest things in the world are pleasant thoughts: and the great art of life is to have as many of them as possible.” — Montaigne

I thought, Gosh I’m not off to a terribly good start this morning!

On the other hand, Pooky had looked comfortable in the little image that had come to me when I was half asleep. Her incontinence was gone, her body weight was healthy and fullish, not that paperweight Auschwitz Cat that she had looked towards the end. Her manner had been relaxed and peaceful.

I don’t believe in the Christian afterlife, in part because I refuse to accept Hell and its master, refuse to accept a God made in Man’s image, refuse to believe that Death is just like this only Nicer. I believe that we come out of The Nothing and go back into The Nothing. Elsewhere on the blog, I invoke Robertson Davies and his Great Theater of Life. We step onto the stage, and then off of it, and that’s all.

But the thought of Pooky comfortable at last; that was pleasant enough.

I buried her out in my back garden, wrapped in one of the towels that I’d used to cover the furniture. Her grave is marked with one of the painted wooden flowers that formerly belonged to my mother. I went out there just now.  The weeds had grown up so thick that it was completely invisible even when I was standing right over the spot.