Tommy Doesn't Know What Day It Is... 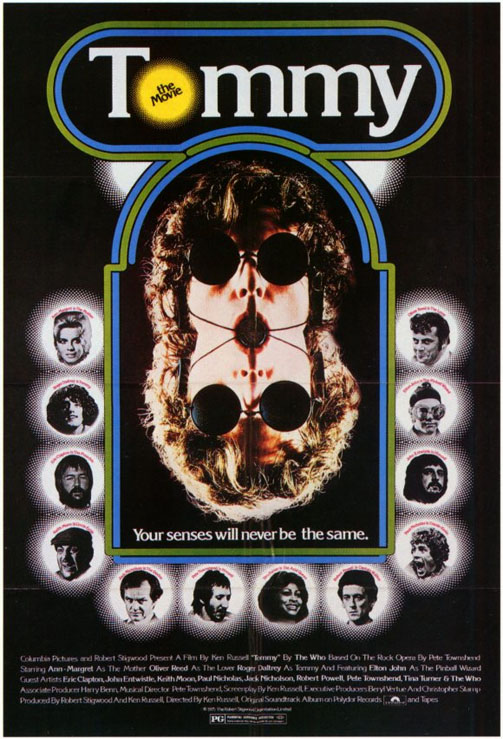 Last night I revisited Ken Russell’s whack job of a movie version of Pete Townshend’s even wackier whack job of a Rock Opera called Tommy. It wasn’t one of my better entertainment choices.

I’ll get my cheapest shot out of the batting cage right at the outset: Ann-Margaret got a Best Supporting Actress Nomination for this? The nominations committee must have been desperate. She actually won the Golden Globe in the same category. All I can say is that there must have been a baked bean fetish going around Hollywood that year.

Tommy is Of My Time. I’m not sure what that says about My Time, but we’ll let it go at that. The movie was released in 1975, just six years after The Who unveiled this most ambitious project and three years after the London Symphony Orchestra recorded a smashing full-cast version of the piece. The LSO record was my entry point, and it’s still my favorite Tommy, although there’s something to be said for the (much toned down and cleaned up) Broadway version of the ‘90s.

There isn’t a single production of Tommy, including The Who’s original 1969 album, that isn’t flawed at some level, and sooner or later you have to realize that at least some of the flaws are built into the material. Tommy is neither deeply thought nor deeply felt by its author, and I don’t think that we remember it today for being a Great Work. We remember it for its top-to-bottom audacity in conception, content, and style. Townshend was the leader of a second-rate band that would be forgotten today if he hadn’t had the temerity to devise the whole concept of a “Rock Opera” and then actually write one that took a cynical look at the cult of personality, infused with pimps, perverts and pinball. Looking back, historians could almost be forgiven to think of Tommy as a dark, nasty parody of Jesus Christ Superstar -- if if didn’t pre-date Superstar by almost a year.

In its original form, Tommy is the musical equivalent of a long, cynical, dirty joke told by a resentful genius in the back room of a dive bar. Most of its audience didn’t get the joke. Ken Russell did -- but as a comedian, Russell has all the subtle comic timing of a Sherman Tank on a playground. To Robert Stigwood, it must have seemed like Russell, with his equally audacious screen career, was the perfect director for this material. At the time, not even the critics thought that he was wrong. But he was wrong, and in a big way.

In a purely structural sense, Russell did some good things with the material, shifting the action from WWI to WWII and seeing to it that it was the lover who killed Tommy’s dad and not the other way around. He devised two really spectacular visual sequences around a couple of the numbers (in the first, my favorite, arcade-style bombers flying in formation turn into crosses one by one as they are picked off by missiles). But beyond that, Russell’s approach to Tommy is almost unbelievably pedantic. Many are the times when his camera doggedly depicts, primer-like, just what the actors are “singing” about. Ironically, the only musical highlight of the film, “Pinball Wizard” as performed by Elton John, is also its worst-directed scene. This may not be fair, but it’s true: the rankest, least-experienced music-video director of today could do a more competent job directing that material with those performers than Russell managed.

Oddly, a scene that offended me on the film’s initial release is now, I find, about the only reason to watch the movie: in “Eyesight to the Blind” Eric Clapton plays an electric priest in a rock-and-roll church where supplicants worship at the feet of Marilyn Monroe and pills and booze are given as sacraments in the communion. In both its conception and execution, it’s the only sequence in the picture that stands the test of time and has just as profound an impact today as it did in ’75.

It doesn’t help that the movie of Tommy is accompanied by, hands down, the most execrable musical arrangement of this material that I’ve ever heard. “Pinball Wizard,” the sole standout here, is performed by Elton John, who did his own arrangement and brought his own band members along. The rest is all lumbering synthesizers plodding in the night. That Pete Townshend arranged the material himself just goes to show that an author is not always the best person to handle his own arrangements. As overbearing as the London Symphony Orchestra recording sometimes got, at least it had dramatic focus and weight. At least you could make out the melodies. For the movie, Townshend turned his own music into synthetic mud.

Russell compounds this injury with outrage by casting the picture almost exclusively with non-singers. Jack Nicholson barely tries. He cocks his eyebrow for five minutes then grabs his paycheck and beats a hasty retreat, thank you very much. But Oliver Reed tries very hard indeed, and is very trying. Reed is a favorite of mine whom I would watch in almost anything (excepting only a certain other abominable Ken Russell movie that will go nameless here), but there’s a reason why the singing role of Bill Sykes in the film version of Oliver! was cut to, well, nothing. Ann-Margaret, on the other hand, normally can sing, but in Tommy she is so busy over-emoting and rolling around in waves of baked beans that she seems to have forgotten how. Even Eric Clapton, Roger Daltrey and Townshend himself get their voices undercut in the final mix.

It’s almost as if, in post-production, Russell actively said: “Oh, this person can actually carry a tune. I’ll have to find a way to undermine that somehow.”

It’s not Russell’s fault that the final third of the story, the “Rise and Fall” of Tommy as a Cult Figure, is also its least interesting and most perfunctory section as originally composed by Townshend. Russell handles the nonsensical climax as well as anyone could have, and sandwiches his film with faux profound opening and closing shots of a figure against the sun. Like the rest of the movie, the Messiah sequence has moments of goodness, moments where it snaps into focus and promises to actually go somewhere and accomplish something... only to fall back on some bit of desperate excess that drowns the audience in ugliness, baked beans, and, ultimately, pointlessness.

No, most fun I had in watching Russell’s Tommy last night was in noticing how young everyone looked. Turning back the clock is the kindest thing that film can do. But seeing Tommy again for the first time in a whopping thirty-five years, I realized something: I didn’t like this movie then, and I like it even less now.