Notes From the Inside 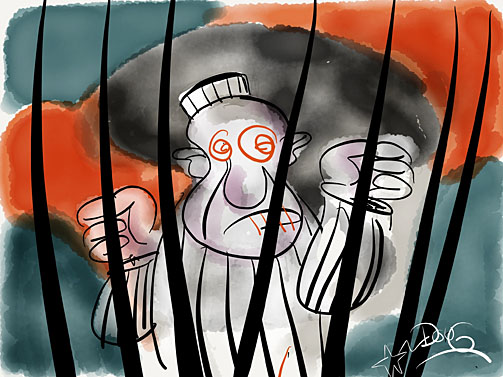 After my experiences this year I cannot help but come to the conclusion that America’s approach to “justice” is completely broken, a system not so much consciously devised as merely grown like a crazy mold over too many generations of contradictory and sometimes nonsensical laws enforced by an army of licensed bullies and thugs and devised by a two-hundred-year-long parade of self-serving politicians, officials and administrators, most of them corrupt, nearly all of them working at cross purposes, having at their core a set of social values that is diseased at best.

You say “diseased” is too strong a word to describe our social values? I say not. I say any culture that still puts people to death is diseased. All life is sacred, and none can be replaced.

I feel for the families who have lost a loved one to murder, but two wrongs don’t make a right, and demanding the blood of the perpetrator is not justice. It is asking someone else to become a murderer in order to satisfy your own lust for revenge.

As long as governments are in the business of taking lives, we are all at risk.

We live within this myth of an egalitarian society where all things are equal, except guess what, they aren’t -- and this includes crime. You wouldn’t give a child who swipes a pack of bubblegum from a supermarket the same sentence that you’d give a twenty-year-old who robs a couple at gunpoint, but blanket laws for operating under the influence do just that. I did some research on this. It doesn’t make any difference if you drive a mile or ten miles, or even if you never leave the parking lot. It doesn’t make a difference if you only drive a foot and a half. If you get into a car with keys in your pocket, but crawl into the back seat in order to sleep it off (in other words, if you’re doing the right thing), you can still be arrested for OUI and suffer the same consequences as someone who careened down the middle of main street at fifty miles an hour and took out a lamp post.

I want to spell out the bleeding obvious right now and make it clear that I’m not defending drunk driving. What I’m saying is that in order for “justice” to have any meaning whatever, all cases need to be judged on their individual merits. Blanket laws make that impossible.

I have friends who were so badly injured by drunk drivers that they nearly lost their lives. Like the families of murder victims, I feel for them: but they need to let go and listen to reason. All incidents of operating under the influence are not created equal, and should not be treated the same, and it defies reason to suggest otherwise.

In most, but certainly not all cases, it is plain crazy to throw alcoholics and drug addicts into jail. These people are not criminals.

They have a problem. You might just as well throw someone in jail for being fat. Are they guilty of being stupid? Indeed, they often are. But if we jailed everyone for their stupidity, then everyone would be in jail, including you.

You say that the law is meant to be a deterrent: but that’s not how it works. Because alcoholism and drug abuse are not “bad behaviours” like robbing a store or punching someone in the face that one can simply choose not to do. I met a man in AA who lost his business, his house, his family, everything he had, not just once but three times. He didn’t do that because he got out of bed one morning and said to himself, “I think I’ll get pickled today and then go out and smash my car into a police cruiser.”

The only thing that jailing alcoholics and drug addicts does is to clutter and crowd the prison system, and sometimes to set these people up for more failure.

What they need is help. I was very fortunate to land first in 4 East, where I received medication, treatment, counseling and, this last time, a ticket into an extended outpatient program that finally nailed down my recovery. If I had landed in jail instead, I guarantee you the outcome would have been different.

But then, based on my personal experience with our jails, I’m not convinced that any but the hardest, meanest, worst offenders belong in there.

If you have not spent time as an inmate in a jail, you have no right to an opinion on this subject. You cannot understand what it is like until you have been through it.

The fact is that any significant amount of time spent in one of those places will turn anyone into the kind of person who is unfit for any other kind of existence, someone who is unfit for life on the outside. It is the ultimate vicious circle. You can put someone in there whose only crime is to have a self-destructive habit: and they will come out a menace to themselves and society.

God forbid that someone fragile or mentally challenged ends up in one of those places. I’m sure it happens. God help them. It must be a shattering experience.

Actually, if they treat other people in the long term the way they treated me in the short term, I’m surprised that there aren’t more fatalities. I won’t go into most of the gory details, but I will say that, just for starters, I was denied my necessary medications. I shudder to think what would have happened to me if I had stayed any longer without access to my meds.

Just don’t call them “correctional facilities.” There is nothing correctional about them.  By the time I entered jail, I was already determined never again to get behind the wheel of a car while under the influence of alcohol, and so for me jail was just an unnecessary slap in the face. But I met two addicts while I was in there, and both were repeat offenders. So you see: jail doesn’t change anything or anyone. If you’re like me, the “correction” has already occurred internally; if you’re like the other fellows., or like the young man I met in the Seton IOP who had no less than five OUI’s under his belt, jail time won’t correct you.

Ask any alcoholic. The change has to come from inside you. And there is nowhere, nowhere on earth that is less conducive to helping a person make that internal adjustment than the inside of a jail cell.

PS, I also have a “friend” who said, and I quote, “Don’t do the crime if you can’t do the time,” a comment that I thought unconscionably flippant and arrogant, not to mention ignorant. And not only that, but, hmm, I don’t recall him saying anything like that when George Bush was the perpetrator. Oh, and by the way, Bush got off scot free because -- oh yeah -- he was George Bush and remember, we live in an egalitarian society. Yeah. Right.
Posted by Freder at 12:21 AM