Another Whack at the Family Tree 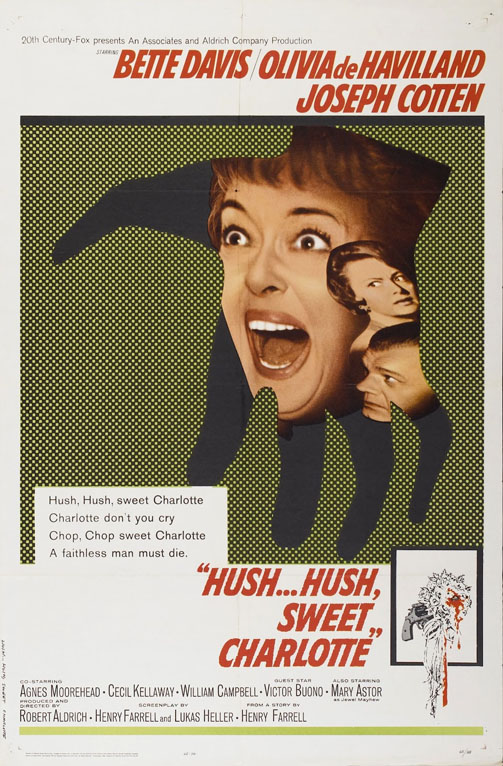 Hush... Hush, Sweet Charlotte, aside from having a really annoying title if you have to type it out multiple times, is Robert Aldrich’s followup to Whatever Happened to Baby Jane (you can read my review of that film here), and although it can’t be faulted in terms of the talent and skill on display, it is nowhere near as interesting as its predecessor.

Made two years later in 1964, it was originally slated to have Davis and Crawford repeating in the starring roles, but Crawford had to bow out due to “health issues” -- or was it just because she was making a pain in the ass out of herself on the set? -- and was replaced, greatly to the benefit of the movie I think, with Olivia de Havilland. Others of the Baby Jane repertory cast returned, especially including Victor Buono, and were joined by Agnes Moorehead (seemingly having a wonderful time in the part of Velma, sort of a blunt instrument as Faithful Retainers go), the always-wonderful Cecil Kellaway, Joseph Cotton, a one hundred percent unrecognizable Mary Astor (is this really the same femme fatale who played Bogart for a fool in The Maltese Falcon? It hardly seems possible), and, most briefly, Bruce Dern.

Charlotte has all the same cunning sadism, the same crisply photographed patterns of shadow and light that Baby Jane had and then some; unfortunately it is also far more visceral and in-your-face with its shock scenes, and far more predictable and ordinary in its plot and conception. Although based on a novel by the same author, it just isn’t as clever, and without the cleverness to wink at us from behind the veil, so to speak, what we’re left with is just a really ugly story populated by really ugly characters who make you feel dirty just by spending time with them.

Which isn’t to say that it’s not well done; it is. Aldrich handles the affair with the precision of a cutting laser, and the cast are all uncomfortably effective in their roles. Once again, Davis performs valiantly in a deeply unglamorous role, not just in the spectacular pyrotechnic displays of mental breakdown that are frankly disturbing to watch, but in the kinder moments that her character is sometimes allowed. De Havilland, with her nice-girl looks and manner, turns in a shrewd and, by the end, deeply mean-spirited performance. Meanwhile, Cotton moves in like a smooth-operating machine, Buono brings the full force of his physicality to bear, and Kellaway just does that smooth, languid thing that he does.

The picture opens with a scene of violence that is far more graphic than fans of Baby Jane have any right to expect, and indeed I wondered how Aldrich could even get away with it until I reflected that this was 1964, right around the time when directors were beginning to experiment with more explicit depictions of sex and violence; this, after all, is what gave rise to the MPAA’s still-infamous ratings system. Britain’s Hammer horror films were already weltering in gore, and Aldrich must have felt that he couldn’t afford to seem quaint in the shock department. Instead, Bruce Dern’s messy exit almost kills the movie in one, shall we say, chop. It stops the show before the show has even begun.

Beyond that, Charlotte may disappoint fans of Baby Jane just by belonging to a different gene pool. The two movies are really only related in superficial ways. Baby Jane was a Hollywood Gothic and as such belonged in the same family as Sunset Boulevard, with a flavor, with twists and quirks and freakishness, that only Hollywood, only modernity can bring to bear.

Charlotte on the other hand is pure Southern Gothic and no two ways about it, and if you like that sort of thing, this is your -- ehm -- meat, but at it’s heart this is a very different animal. Southern Gothic is all about Tradition and wisteria and magnolia and long-buried secrets dragging “theyseffs” out of the bayou muck to haunt the living, and that’s what Charlotte does. The cousin-to-cousin manipulation and mental torture is merely a colorful add-on, and a predictable one at that.

I do appreciate the climax, however. Without, I hope, saying too much, and speaking as someone who has personally ventured rather too close for comfort to the edge of madness in the past year, it is enormously gratifying (though telegraphed from a million miles away) when the Crazy Lady pulls herself together and gives Them Bad Folks the message from On High that they have coming to them.

In the midst of its carnage and its very conventional Southern Gothic hugger-mugger, Hush... Hush, Sweet Charlotte does contain one really lovely, exceptional passage of dialogue, beautifully played by Kellaway and Davis in a rare tranquil moment as the pair walks back to the house from the family plot. Quoth Kellaway, “You’re my favorite living mystery.”

And Davis draws herself up. She turns; for a moment we can see a ghost of her youthful loveliness pass flitting over her face like one of those lacy Southern Gothic curtains wafting in the summer breeze. Quoth Davis:

“Have you ever solved me?”