The Bargain Basement and the Pendulum 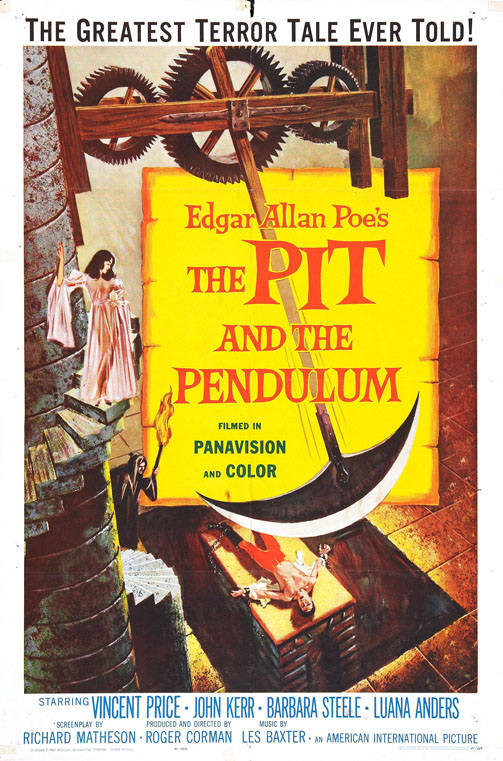 It's just a fact that you'll do some things you wouldn't normally do when they are dirt cheap. And so it was that I scoffed up a Roger Corman / Vincent Price Double-Horror-Header out of the five dollar DVD bin, thinking at that price I could afford to hate them both.

Tales of Terror was first on the menu, and I'm glad that it was, because that left the 1961 feature The Pit and the Pendulum for this week. With the same writer, same director, same star all working for the same studio and all purporting to adapt Edgar Allan Poe (but really just looting his work for titles, horror set-pieces and the occasional one-liner), this is a virtual second helping, with one major difference: this is probably the first-ever Roger Corman movie that I could watch without holding my nose.

Surprised? I was. Maybe he had a better than average crew. Maybe he had a bigger than average budget. Maybe for once in his life he decided not to sleepwalk through the making of a movie. I don't know the reason. I just know that, "praising with faint damns" as a friend of mine likes to say, The Pit and the Pendulum doesn't stink on ice.

Which doesn't mean that it's good, exactly. But it's not inept and it has its moments and the finale actually has a colorful, spirited look about it that I've never, ever seen in a Corman movie before.

Price walks the fine line between comedy and drama quite well for the most part, slicing the ham just right barring one scene in which grief is supposed to get the better of him. And Oh! The Agony! He leans against a bedpost and buries his face in his hands. By the end of the picture, of course, his character is intended to have completely gone around the bend, and so Price has permission, so to to speak, to munch on the carpets and chew the curtains to his heart's content -- and chow down he does, with relish, ketchup, mustard and glee. Not since the days of the silent pictures have I seen madness presented with such histrionics, and you know what? It's okay. It's Vinnie. It's what he does.

The rest of the cast -- well, Barbara Steele was brought in presumably on the strength of her work in Mario Bava's barbaric Italian "gallo" horror pictures, in which she was called upon primarily to a) look great, b) be tortured to death, and c) lie perfectly still with her eyes as wide open as possible... and that's essentially what she gets to do here, although this being a strictly "made in the USA" picture circa 1961, her fate is not nearly so gruesome as what Bava routinely dealt out to her. John Kerr is on the set to look stern and serious and to keep his face as absolutely straight as possible, presumably to act as a counterbalance to Price; and the rest of the cast are simply third-rate Hollywood hangers-on for whom this probably represents a highlight of their career. Some fates are worse than death.

In his able, workmanly way, Richard Matheson managed to carve a sensible and appropriately gruesome movie-length plot out of Poe's decidedly bare-bones short story. We have scary castles and torture chambers and a Love to Defy the Ages that was Snipped Short in its Youth. We have Secret Passages and suspicious domestics and harpsichords playing in the night -- all the trappings that affairs of this sort are supposed to have.

Corman directing as if he gives a damn is not the same thing as saying that Corman has talent: that would be going too far. But it came as a pleasant surprise to this jaded fright-fan to stumble across a Corman picture that was actually competent, that not only attempted mood but sometimes -- wonder of wonders, Halloween miracle of Halloween miracles -- achieved it. The Pit and the Pendulum doesn't have one original bone in its body; even its cobwebs have cobwebs. But it's possible, barely possible, to look at this picture and wonder whatever happened to the director that made it.