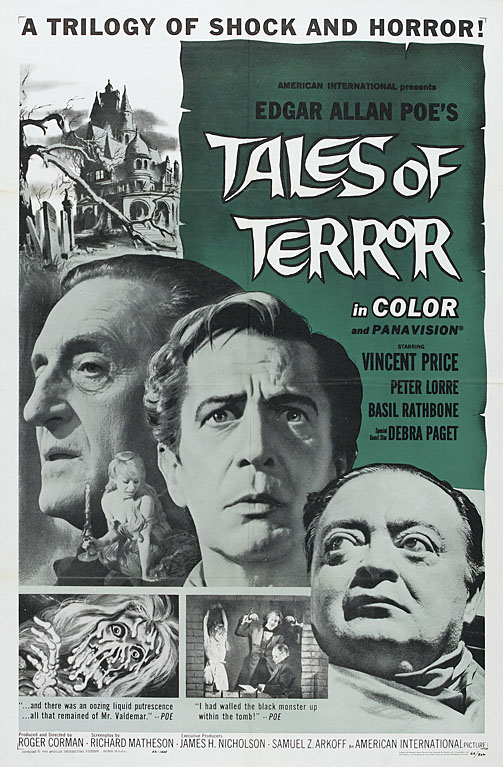 With a runtime of just 80 minutes, and even with a screenplay by the usually-reliable Richard Matheson, still Roger Corman’s Tales of Terror would be more aptly titled Tales of Tedium. Well, after all, not even Roger Corman ever claimed that Roger Corman was a great director, and although the Poe movies that he made for American International probably come as close to being “A” pictures as anything he ever attempted, still they were bargain-basement ventures, made on obvious standing sets with stars who, for the most part, were at the very end of their careers.

Only Vincent Price can be said to just be coming into his own, and this is largely because he had washed out at the major studios; I can’t think of any other actor who can reasonably claim that working for American International was the best thing that ever happened to them, but for Price it absolutely was the case.

Tales of Terror proves beyond doubt what I’ve suspected for some time: that Price was never a serious actor at all. Give him a straight part and his innate hamminess sells it straight down the river. Ah, but give him a comedic part, and you have done something for which he is ideally suited. In fact, all of his greatest horror characters, Dr. Phibes et al, are actually gloriously over the top comedic roles that Price gleefully milked for all they were worth.

In Tales of Terror he gets to do both. In the first story, “Morella,” Price is a mournful lush who has been pining for his dead wife for something like a quarter of a century. If he’s been putting away the booze for all that time in the quantities that he’s shown throwing it down during the events of the story, it’s a miracle that he didn’t join his wife years ago. His performance in the part is so wet that we wish he had. However in the second story, “The Black Cat,” (which owes as much or more to “The Cask of Amontillado”), Price is typecast in an out-and-out comedic role as a foppish wine-taster, and here he is genuinely fun to watch, rolling his eyes and puckering his lips outlandishly as he simpers through the task. As a serious actor, Price is a lot more entertaining (and a lot more credible) when he’s making fun of himself.

By 1962 Peter Lorre and Basil Rathbone were at the looking at the writing on the wall. Lorre had just two years left to live. One wonders how badly they needed the money, or if they simply wanted to work; Lorre gets the better deal in Tales of Terror with a plum role as a drunk and a cuckold who walls Price up in his basement. Rathbone gets what should have been and could have been a juicy role as the mesmerist Carmichael in “The Case of M. Valdemar”; but his former onscreen fire flares only briefly, and for his part Corman seems actively to undermine Rathbone at every turn, cutting away from him during his lines, focusing on other actors when the attention, by rights, should be on Rathbone.

This was one of American International’s more respectful treatments of Poe -- they would evoke and abuse and misuse his name many times in coming years. But respectful or not, it just doesn’t have any life on its bones. It doesn’t even look particularly good: its Gothic trappings stink of the five and dime store. When Price’s rapidly-decaying M. Valdemar walks at the end of the film, you get the sense that he’s not motivated by vengeance: he just wants out of the movie. Sad to say, I felt that way long before the end.