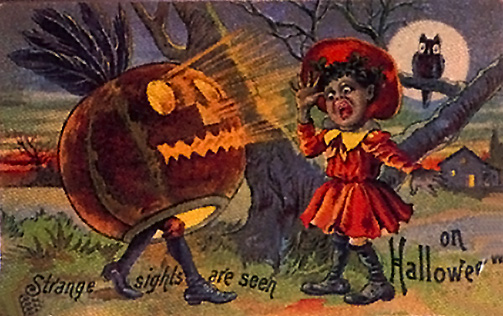 So, what’s on my Halloween Music Playlist for 2012? I’m glad you asked.

A real good curtain-raiser is Jill Tracy. I never knew of her before this year, and she is one of the best discoveries I’ve made in ages and ages. A little honky-tonk, a little rag, a little Charles Addams, a little Billie Holliday and a little Edward Gorey, this gal just steals my heart (I wonder if she’d eat it). She actually wrote an orchestral score for F.W. Murnau’s Nosferatu. I have to make it a goal to sit down and pair the two before the season is out. “Evil Night Together,” from her album Diabolical Streak, is the opening cut on my 2012 Halloween Playlist.

No Halloween playlist is complete without the Great and Unique Screamin’ Jay Hawkins, and his angst-driven “I Put A Spell On You” contrasts beautifully with Tracy’s opener.

Amberian Dawn is a metal group that’s more melodic than most and employs an operatic female voice in their music to striking effect. They shake the house with “He Sleeps in a Grove” in the number three slot, from their album The Clouds of Northland Thunder.

Contrast is something I like. Fancifulness and Romance are two more things that I like. My fourth song gives me all three, as Captain Hook (in the person of Cyril Ritchard) sings to “Oh, My Mysterious Lady” from the original Broadway cast of Peter Pan.

Another recent discovery, The Birthday Massacre, then rocks the house with their sweetly hard-edged single “In the Dark” at song five.

Always a proponent of unexpected turns, I then chose “Asa’s Death” from Grieg’s Peer Gynt Suite. The version of it that I have, unfortunately, is exceedingly minor. Remind me to track down the brilliant George Szell / Cleveland Orchestra version someday.

Ever hear of a group called Adrian H and the Wounds? Me neither, until I picked up an album called A Dark Cabaret 2 earlier this year... one of my better musical buys. My cut number seven is a delightfully eerie number from them called “Bad Man.” Its theme is circular: you are what you’re obsessed by. In tone, it makes me think of Tom Waits doing really scary circus music.

In the number eight position I chose Par Benatar’s version of the Kate Bush song “Wuthering Hieghts” -- in a nutshell, the never-filmed ghost story segment of the book. I like Kate’s version, but I like Pat’s better. It sacrifices the etherial, but gains passion as a bonus. A standard -- or it should be.

Next we get to Party Down in ElectroSwing style with The Talented Mister & His Berlin Bohemians, playing “Jive the Mood” -- it’s not meant to give you the heebie-jeebies, but the energy is so squirrely that this definitely fits in at a Halloween party. Shake dem bones!

Nox Arcana is the only performer or group who gets a double hit on my playlist this year, and that’s only because the first song that I selected, the one that I had to have on the playlist, was so short that it hardly seemed representative. So, from their Circus of Lost Souls album, I picked “Spellbound” and “Calliope.” The first is a mournful scratchy-record lament. The second is, well, an arcane calliope in a necromantic sideshow.

“The Monster Mash” just gets too, too much airtime around this time of year, so much that it’s become downright trite... and the even sadder thing is that stations often play third-rate knockoff versions at that. (Hint: if the version of “The Monster Mash” that you are playing is NOT by Bobby “Boris” Pickett and The Crypt Kickers, you had best get out of town on the fastest horse you can find!). But that doesn’t mean that the Kickers can’t be represented, because they turned out a couple albums worth of material, and “Skully Gully” is one of their better pieces. It gets pride of place as the number THIRTEEN song on my playlist.

“Mystic Eyes” by Them is fourteen, followed by the always-sublime Cab Calloway with one of his half a million recordings of “Minnie the Moocher.” I really wanted his “St. James Infirmary Blues,” but it seems I haven’t got a digital copy of that one. Yet. Next Year.

Another cut off the Dark Cabaret album took my fancy, this one by a group called Spiritual Front. “Song for the Old Man” is fine and wistful and eerie and mystical, and being an Old Man myself I appreciate the sentiment.

You don’t know the title, at least I didn’t, but you do know the tune, and you’d recognize it if I could play it for you here: a sort of creepy, collagenous, clunky, rag-taggy jazz tune called “Peter Gink” by Six Brown Brothers takes us into the eerier byways of N’Awleans at number seventeen.

There’s a group called Horslips that put out an album called The Book of Invasions yonks ago that I quite liked... just not well enough to buy any of their other albums. I included one of their songs on my Halloween playlist. It’s called “The Power and the Glory,” and it starts out with a simple, spooky organ riff that suddenly erupts and rocks the house down. It seemed apropos.

Raymond Scott is known to all of you from Carl Stallings bastardizations of his music for Warner’s Looney Tunes cartoons. With a title like “New Year’s Eve in a Haunted House,” my number nineteen pick was a no-brainer.

Another recent discovery of mine, the wonderfully odd and outrageous cello-based rock band Rasputina, gets the penultimate entry with a winking, sly short piece called “Utopian Society.” When I listen to it, I see once-elegant creatures of the aristocracy in their fancy gowns and swallowtail coats, frozen at a mile-long table in the Castle Hall, covered in dust and cobwebs.

And my last song on the list, number twenty-one, is a little foot-stomping, fist-pumping rocker with an organ line that puts a period on the whole selection. It’s “Belladonna & Aconite,” by a band that I know nothing about called Inkubus Sukubus, from This is Gothic: The Bat Cave Anthology. They have a gal lead singer, and although it rocks, the song has just a hint of sadness to it, a mournful edge underneath its hard-driving guitar licks. It has a long, slow fade-out.

That’s what Halloween is, after all: the long, slow shutting down of the year before winter comes and closes its evil fist around us. From Jill Tracy welcoming us to a ghoulishly delicious celebration of life’s impermanence to Inkubus Sukubus’ defiant pounding on the coffin lid, I think my selection covers the season pretty well.

What’s on your Halloween playlist?