Roll Up For The Mystery Tour! 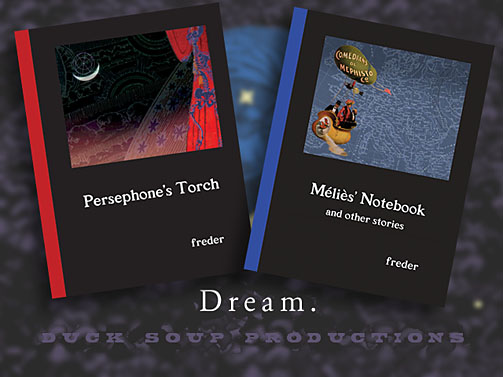 I'm happy to announce that the KINDLE edition of my novel, Persephone's Torch, is now available at Amazon. You can follow links here or from our catalog page above. A full description of the novel is available either way. The NOOK version should be up at Barnes & Noble in the next day or two, UPDATE October 12: The ePUB version for iOS devices is finally online at iTunes (though we had to make a concession to their bizarre author naming rules). If you have a choice, go for the ePub version, I think it's the best-looking and most reader-friendly of the lot. I'll update this post as the different editions roll out!

It's just a buck ninety-nine in all formats -- at that price you can hardly afford NOT to give it a try!

While I'm making announcements, I thought I'd unveil the cover for the companion volume to Torch, Méliès’ Notebook and Other Stories. This is due out at the end of November and will contain approximately twenty unusual tales, including one brand-new story and "The Death's Head Man," which was nominated for The Pushcart Prize back, oh, yonks ago when it first appeared in the July 1996 issue of Kinesis.

Don't they look swell together? You know you want them on your e-bookshelf. Méliès’ Notebook will also be available across all those platforms and will also sell for just $1.99.  It's just the first wave of publications from Duck Soup Productions. I hope that you like them.