They'll Have You in Stitches 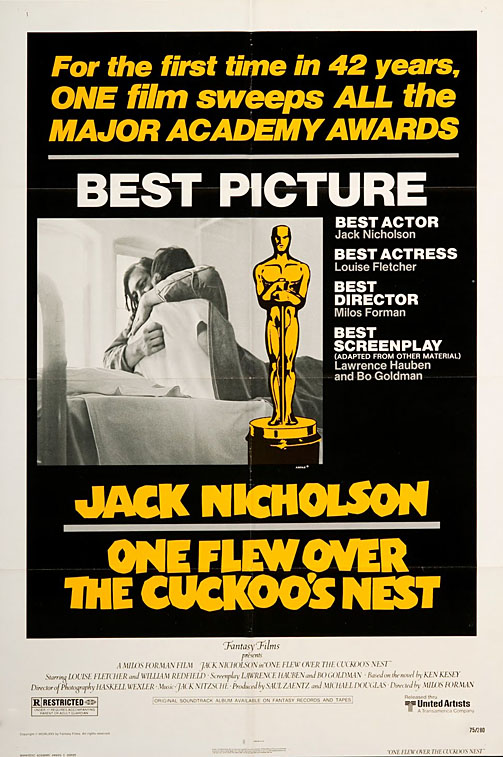 It’s been well over thirty-five years (I have to pause a moment, to let my brain unhitch over that ungodly bit of trivia) since the afternoon that I sat in Portland’s Fine Arts theater and wept bitterly over what the state hospital did to Randle Patrick McMurphy. In all that time, I never felt a pressing urge to go back and re-visit One Flew Over The Cuckoo’s Nest (as much a product of the Douglas family as it is of Milos Forman), although I couldn’t have told you why. On the other hand, when the two-disk “Special Edition” turns up on the Omnistore shelf with just a $3.00 price tag, I couldn’t not go back there. It’s a classic, right? I don’t think that anyone with a brain would deny its status as a classic. It was just as if someone was holding a gun to my head and saying, “If you don’t buy this now, you’re stupid.”

But after watching it the other night for the first time in three and a half decades, I know why I never felt the need to go back to this particular asylum, and it’s not due to the tragedy or the ugliness of the story. Here is one time where I can spare you you the triviality of any faux-profound ramblings. The thing about One Flew Over The Cuckoo’s Nest is that it wears itself on its sleeve.

Lots of other movies, including much less serious ones, are worth repeat watchings because you pick up on things you missed the first time through. You find Hidden Depths. With Cuckoo’s Nest there are no Hidden Depths: it’s all right there on the surface.

The only real pleasure in going back lies in watching the supporting performances: the astounding precision of Louise Fletcher’s eye movements (not for nothing did she win the Best Actress Oscar that year for a role that no doubt looked like a cypher on paper), the authenticity of all the actors playing the inmates -- especially including reminders that Danny DeVito and Christopher Lloyd were actually actors of quality once upon a time, before they sold out and settled on delivering a Specific Caricature over and over again.

But then Cuckoo’s Nest pretty much did the same thing for Jack Nicholson, too. His star was on the rise when he got McMurphy, McMurphy nailed it down, and McMurphy is the last great part that he ever played... everything else that he’s done has been spinning off of this moment in time, just Jack playing Jack; like DeVito and Lloyd, he fell into that contemptible class: someone who can act, but chooses not to.

The movie still has its impact all these years later, still hasn’t lost one bit of its punch. But it can speak for itself. For my part, the other memories that it brought back are more important to me.

We arrived ten minutes late at that bygone showing because it was an R picture and I was underage, and Dad always, always got us to the movies late. It was a major bone of contention, because for me one of the most vital things in life was to get the story right from the beginning. This was important, and why didn’t my father understand? Why didn’t he care?

I see now that this was my Asperger’s rearing its ugly head. Movies that had a lot of talking in them and told their stories verbally rather than visually were especially problematic for me, and so I needed those first ten minutes to grasp what was happening and know who was doing what to who. Coming in to “the middle” was more than just bothersome and annoying. It meant that I would not comprehend much of what I saw.

And Dad didn’t seem to care. He never got us to the damn movie theater on time. It was beyond the bounds of all common sense as far as I was concerned. What did it take to get to a movie on time? Obviously, work was more important to him, but for me, to this day, nothing is more important than getting to a movie on time. Nothing. You could be sitting in the car next to me with a busted leg. Sorry, Charlie, it’s going to have to wait. I’m so anal about this that I usually turn up for a showing twenty minutes early. Better to cool my heels in the theater for twenty minutes than to miss even a single frame of film.

Cuckoo’s Nest was good in that, being all on the surface as I see now, it didn’t matter if you missed the first ten minutes or if you didn’t understand half of the dialogue (just as an example, McMurphy’s profane talk about the female anatomy went over my head at mach five all those years ago). It was all right there visually in the walls of the hospital and the faces of the actors. There’s a reason that the primary memories that I had of the movie were of the electroshock scene, the final horrifying fate of McMurphy and the Chief’s Great Escape.

I blubbered loudly and like an idiot in that movie theater when the Chief lifted McMurphy’s torso and the incisions on his head were brought into view. My father tried to shush and stop me. Not in a mean way, it must be said. He was feeling it, too, and I don’t think he wanted me to be so distressed.

It’s sad to note that Will Sampson lived just over ten years after playing the Chief in Cuckoo’s Nest. I hope the producers got down on their knees and thanked God Almighty when they found him, because he makes the movie. A lot of other actors could have played McMurphy. I can’t imagine anyone other than Sampson as the Chief, and it’s naught to do with his size. It was the softness in his voice, the gentleness in his manner, the authenticity in his eyes.

After learning that his stay could be an indefinite one, McMurphy allows himself a flash of anger at his fellow inmates: “You let me go on hassling the nurse, knowing what I had to lose?”

But he would have hassled Nurse Ratched anyway, even knowing. It’s what we do to keep ourselves sane.