Back to the Drawing ... Pad 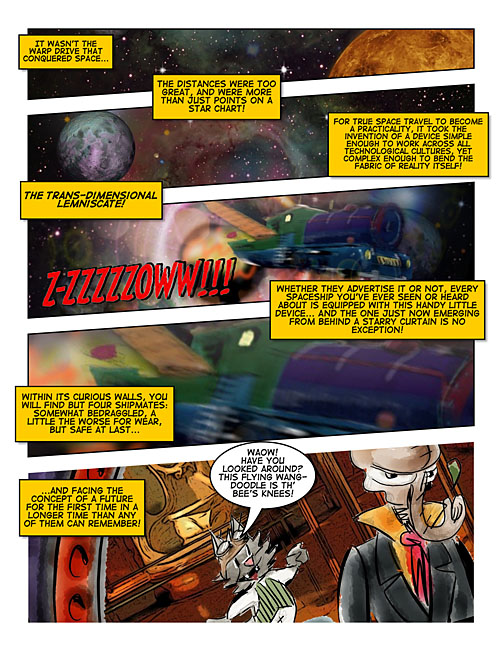 I’ve done a couple of posts (and I have at least one more in the pipeline) that highlight the frivolous side of my iPad -- and by extension, I suppose, the frivolous side of me. But I do serious wok on my iPad, too, and with the apps that are coming out all the time, along with the increasing speed and processing power of each new model, I can see the day coming when the iPad could make desktop computers obsolete.

My iPad is already a good deal more powerful than the last computer i owned before upgrading to my current iMac. I can do more with it, and do it faster. Writing, drawing, coloring, painting, shooting movies... it’s all a dream come true. The fact is, I have so much capability at my fingertips now that I feel a bit like that kid in the candy shop with a dime in his pocket and about a gazillion ways to spend it! There aren’t enough hours in the day to use all the nifty tools I have fitted myself out with.

For the upcoming new edition of QUIRK, due at the end of the month, I am writing and drawing a whole new framing story... and I am doing it 100 percent on my iPad, from the scripting all the way through to the final page layout and lettering. Yeah, they have an app for that!

My iPad “Studio” is a wonder of nature. From Procreate to Paper, from a font maker to a mood board, from a letterpress printing setup to a darkroom that will do things that would make Ansel Adams’s jaw drop, I’m outfitted with the best tools there are... and here’s the nice part: iPad apps do these wonderful things without breaking your bank account.

Ten bucks will buy you a very well-functioning version of Photoshop for your iPad (Photoshop Touch) and I’m finding that it is far more natural and pleasurable to work in than Photoshop on my desk computer. One of the reasons that I stopped making comics six or so years ago was because the job of coloring them in Photoshop was just the most tedious, aggravating, unrewarding. wrist-breaking donkey work that you can imagine. On my iPad, it is a pleasure. I can sit in front of the fire with my iPad and a stylus and color comics with a cat on my lap. This is heaven!

When it comes time to sell those comics, I’ve got PayPal and Square Register installed on both my iPhone and iPad, so I can take any card, anywhere. To help organize my life, I’ve got Wunderlist and Daily Routine, both of which I’ve just started using, but which seem promising for keeping me on track and on task -- something I desperately need!

Oh, here’s a good one: My Library. This little app comes with a built-in barcode scanner. It’s a database for all of your books, DVDs and CDs, and all you have to do is scan ‘em in! What a joy! My only problem is in finding the hours of the day I need to enter all of my media into the thing! (Daily Routine, are you listening?)

But it’s the drawing, coloring and painting that’s Really Great, and is re-opening some doors for me that I thought were closed forever. As recently as one year ago, I did not think that I would ever write or draw comics again. The fun had gone out of it, I thought for good. But look up there! Look at the top of this post! Look at what I did! -- And it’s just the beginning!

Nothing that can give you back something you love and something that you lost is just a toy. When the iPad first came out, it did not have the power or the functionality that it has today and I truly did not see the point of the thing. That’s changed now. Today it brings out the Charlton Heston in me: you’re going to have to pry my iPad from my cold dead fingers.