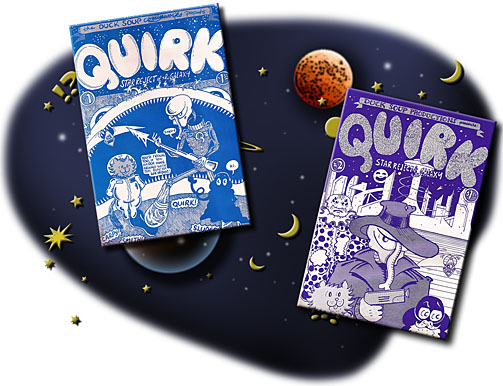 With the new first issue of Quirk due by the end of the month, it seems appropriate to go, as Van Morrison sings it, way way way back... to the scary days when Quirk starred in two issues of his own real-live printed-on-paper comic book. Quirk is my longest running character, and I think the new eComic will prove that he’s come a long way!

I’m not going to give you a snow job. Back in 1980 and 1981 when I published the two paper issues of Quirk, Star Reject of the Galaxy, I was proud as could be of them. But looking at them now with more sensible eyes and a lot more experience under my belt, these were nothing more than the extremely crude efforts of a sincere beginner. Cat Yronwode, one of the first true pioneers of comics journalism working in a day when when there weren’t nearly the outlets for that kind of writing that there are today, summed it up best in the review of Quirk #2, “The Humor Agency,” that she wrote for The Buyer’s Guide for Comics Fandom way back in ’81. Here it is, in its entirety:

“The artwork is strictly from amateur-city, but the story reads as well as any newsstand comic and better than Jim Starlin's current work for Epic. In this adventure Quirk, a sort of rough cynic with a nose worse than Manthing's, decides to take on a Chandler-Hammet guise with science fiction overtones -- but the writing goes a good deal deeper than a parody of detective genre fiction as it delves into the questions of sorrow and happiness, of the enforceability of states of mind, and, yes, love. I can't call this the greatest thing since sliced bread -- the art is far too rough to be anything but improved upon in later issues -- but any story about a man of honor is worth reading, even if that ‘man’ looks like a walking spaghetti-nose."

About issue #1, I guess the less said the better. Cat was being kind when she called it “a better than average amateur effort” only because, of all the fan comics she read and reviewed that week, mine was the only one that attempted to establish characters and tell a story with a beginning, middle and end!

The Buyer’s Guide for Comics Fandom morphed into The Comics Buyer’s Guide shortly after. I became a contributor for a while, writing long snarky articles and eliciting a fair amount of hate mail. They had a long, noble run that ended just this month. Maybe I'll get a blog post out of that. Cat Yronwode, in the meantime, has pretty much left the comics scene and founded the really quite wonderfully eccentric Lucky Mojo Hoodoo Co. Check it out.

The full history of Quirk will get some attention in the new first issue of his eComic coming soon. Meanwhile... for thirty years I had boxes and boxes of the paper comics kicking around in my closets. I about plotzed when I saw some dealer on ABEBooks trying to sell them for something like nine bucks. Nine dollars! That is what they call Highway Robbery. I’ll sell them to you for the original cover price, which is a buck-fifty each.

When the time came to vacate the old house, I looked at the six ginornous, heavy boxes of comics ... and they represented yet another failure to me.  I couldn’t bring myself to pitch all of them, but with plenty enough of lugging and lifting to do, there was no way I was bringing them all with me. I kept just two boxes because I didn’t know why. Just because I'm a Sentimental Fool, I guess. The rest are now pulp.

So, the copies now sitting in my storage room are the only ones left. Again, I need to stress that these are no classics, and not even close. My heart was in the right place, that’s all I can promise you. Also, keep in mind that these books are more than thirty years old and have been knocked around a bit. Condition is variable. With all that said, if you still want to check out Quirk in his formative years, you can order these “priceless gems” (and I use those words with tongue wedged so firmly into cheek that I may never be able to talk again!) right here from the newly-christened BOOKSHOP page of Duck Soup Productions. Postage costs more than the damn books themselves.

Oh -- why did I change the "CATALOG" page into a "BOOKSHOP" page? That's another story!