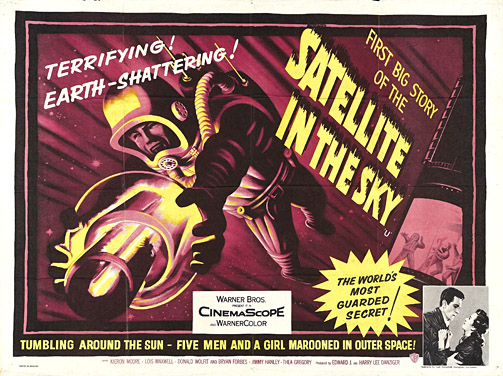 There’s a reason why Warner’s shoveled Satellite in the Sky, a British release about the beginnings of space travel, onto one of their sets as the bottom title in a roster including Them! and The Beast from 20,000 Fathoms. If it’s not the most boring SF picture ever made, it’s right up there, and I defy anyone to stay awake for it. I couldn’t. It’s not one of those incompetent, laughable movies, either, so you can’t even entertain yourself making fun of it. Lois Maxwell was quite cute at the age she was at when she made this picture (I don’t care enough to look it up), but I must be getting jaded even in my prurience, because not even that was enough to keep my eyes open.

I’d much rather talk about 1935’s G-Men, starring James Cagney, Robert Armstrong (obviously finding government work more congenial after his disastrous attempts at promoting giant gorillas in New York), and Lloyd Nolan. G-Men is a terrific picture front to back and kept me wide awake for its breezy 84 minute runtime even though, as a general rule, I don’t care for gangster pictures all that much. Cagney plays a “lawyer” who is too stupid to know better than to punch people out just for coming to his office with a case he doesn’t like. Hello, lawsuit anyone? Hello, Assault & Battery?

I’m a Johnny-Come-Lately to Cagney. For many years I dismissed him as just a schmuck who did all those gangster movies (see above), just a jerk who shoved fruit into women’s faces. It wasn’t until I saw him in Yankee Doodle Dandy and Max Reinhart’s extremely schizophrenic production of A Midsummer Night’s Dream that I began to appreciate Cagney and put him in the same category that I have for just one other actor: Gene Kelley.

Can you see the comparison? Both men are are fully in command of their abilities and know it. Both men flaunt it shamelessly. They combine being hot shit and cool cats and you can’t even hate them for it because they also seem to be such regular guys. I hate them for that!

Both pictures are part of Turner Classic Movies archive collection series of DVDs, and if ever there were DVDs specifically calculated to make movie nuts roll over on their backs and stick all four legs in the air (to steal a Chandlerism) these are the ones to do it. Ten bucks for four Cagney pictures, or four Bogart pictures, or four Bette Davis pictures? Yes, Ma’am, yes, please.

However, the science fiction set containing Them! and The Beast abuses the concept, and the good nature of movie fans. There was an earlier DVD release with just those first two movies included. Get that one, even if it’s more money. Do not even consider the Turner Classics release that includes World Without End or Satellite in the Sky. It may seem like a better deal, but some movies just suck time out of your life, offering nothing in return. World Without End is bad enough to make fun of, but I’ve already beaten you to it, in an earlier column. Just go watch G-Men instead.