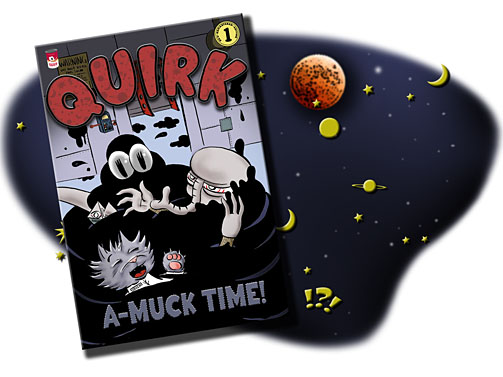 I’m happy to announce that the latest Duck Soup Production is here -- Quirk #1, marking the return of the longest-running comics character you never heard of!

At the center of the issue is a reprint of the 12-page story “A-Muck Time” -- a specific parody of two certain other pop-culture standards that you may recognize, and a fun story in its own right, newly remastered at twice the resolution that it’s been seen in before. It’s surrounded and contained by an ALL NEW four-page “framing story” that brings our heroes up-to-date in the present day and sets the stage for more new developments to come in each future issue.

For newcomers to Quirk (and really, who in heck isn't?), there’s also the first in an ongoing series of “Who’s Who in” and “Previously In” The Quirkiverse text features. All told, it’s 24 big full-color pages for $1.99.

The PDF version is available exclusively right here from Duck Soup Productions. Transactions are handled by PayPal, and the file is delivered to you by email within 24 hours. Details on the “Bookshop” page!

UPDATE 1/29: The “Enhanced iBooks Edition” is available now at iTunes alongside its sister publications, Tinsel*Town, Persephone’s Torch and Melies’ Notebook! This edition is really the cat's pajamas, with great presentation of the graphics, an extra 12-page gallery or art, and music by Kevin MacLeod, for the same buck ninety-nine as the PDF edition. If you've got the hardware, this is the way to go!

I’ve made the decision not to publish a Kindle-specific edition. You may wonder how smart a business decision it is to cut Amazon out of the picture, and I’m not too keen on the idea myself -- but I haven’t found a satisfactory way to ‘port comics into Kindle format without it ending up looking like it was put together by a nearsighted baboon, and I’d rather just skip it entirely than put out a shoddy product that no one will be happy with. Kindle, Nook, and even iPad users are advised that the PDF version is universal and readable on any device.

Next up -- February will see the release of Tinsel*Town #2, featuring the first part of Eddie Fox’s first big Hollywood hit: “Harum Scarum!” Watch the sidebar and this space for updates.

In other news -- Have you noticed the new sections that have opened up here on the site? Check them out! The Emporium features cards, prints, shirts and more based on designs, drawings and photographs by yrs trly; the Character Shop is something I’m doing just for fun and features the same sorts of things, but all connected, as I’m sure you guessed, to the characters and themes in the growing list of Duck Soup books. Both pages have a small list of stuffages on them right now, but I’ll be adding designs on a weekly basis, so check back often.

If it seems like I’ve gone all crassly commercial on you... please keep in mind that this site is currently the only income I’ve got! Anything and everything you pick up here goes to help sustain an Independent writer/cartoonist/designer trying to make good and keep his quats well-fed.