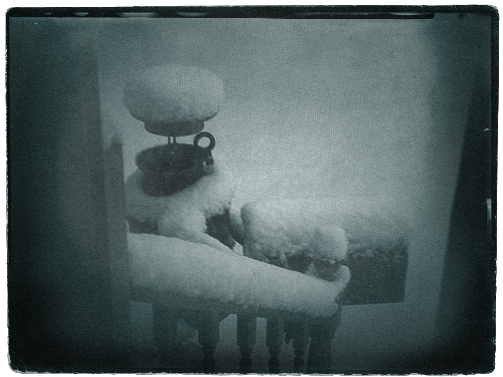 I still have my fingers crossed -- in New England, March can be the worst winter month, and it often is -- but with January drawing to a close and Living Earth telling me that temps are going to climb into the low fifties tomorrow, I say “Let’s have more winters like this one!”

It’s good that I’ve had to write just two checks to the plow guy so far this winter, and it’s better that I’ve had to shovel my front walk exactly once. The worst of winter so far has been a bad week-long cold snap during which temperatures didn’t get out of the single digits -- we were so mollycoddled by this winter that we all complained about this cold spell, but I have lived through far worse. I recall one December out at the old house when, for the solid month, it never broke zero degrees during the day and typically reached twenty below or worse every night.

Back then my mother and I had the two horses and pony to care for that belonged to my sister, although she had abandoned them, left them behind with us when she went off and got married. Another thing to “thank” that insufferable bitch for.

That winter, we had to haul piping hot water from the house to the barn for the animals to drink, because the water in their buckets froze almost faster than they could drink it. Caring for animals that live outdoors will give you personal experiences with cold weather that you would rather not have.

There was also a goat in our menagerie for a while. I don’t know how we got her, or whose idea she was. She wasn’t my idea. None of the farm animals were my idea, and yet for years I cared for them because that’s what you do when people in your family have Crazy Ideas about wanting to be Farmers and then go off and leave you holding the bag. All my life I’ve been the one in the family left holding the bag. Is it any wonder that I am taking time for myself now, finally, in my fifties?

Goat didn’t serve any useful purpose. Like the rest of the barn animals after a certain point, she was just a responsibility. One night during that horribly cold month we went out and called for Goat and she didn’t come. We went for flashlights and found her dead right beside the barn.

Death was a regular visitor to The Barn, but I never get used to seeing that bastard turn up. To this day -- I know he walks everywhere and can appear at any time, but for me Mister Death still wears a winter face and pulls a winter cloak around his bony shoulders. For me, winter is the season of death. It’s what I see and feel when I look out the window.

So, a mild winter like this one is really something to get down on my knees and thank the powers that be for. It’s something worth taking note of. I know that Global Warming is a terrible thing -- but, boy howdy, if this is a side effect of Global Warming then I’m going to be using more aerosol spray cans in the future!

As strong as my ties were to the old house, on days like this I’m powerfully thankful that I never had to spend a winter out there alone. The place was so isolated that you could look out of the windows on a winter night and feel like you were living on the North Pole. On nights when the full moon shone down on the ice-hard snow it could be beautiful, but the feeling that you were marooned in the universe was deep.

Here in town, even late at night when I am the only person awake in the whole neighborhood and the silence is broken only rarely by a passing car, I know that I’m not alone. It takes some of the Death out of winter to have neighbors nearby, even if you don’t know them and never will.

Take that, Winter! You old bastard! -- P.S. I’ve noticed that there’s still some light in the sky at 5:00 PM now. I hope I’m not jinxing us all by typing it, but I think we have this one about licked!