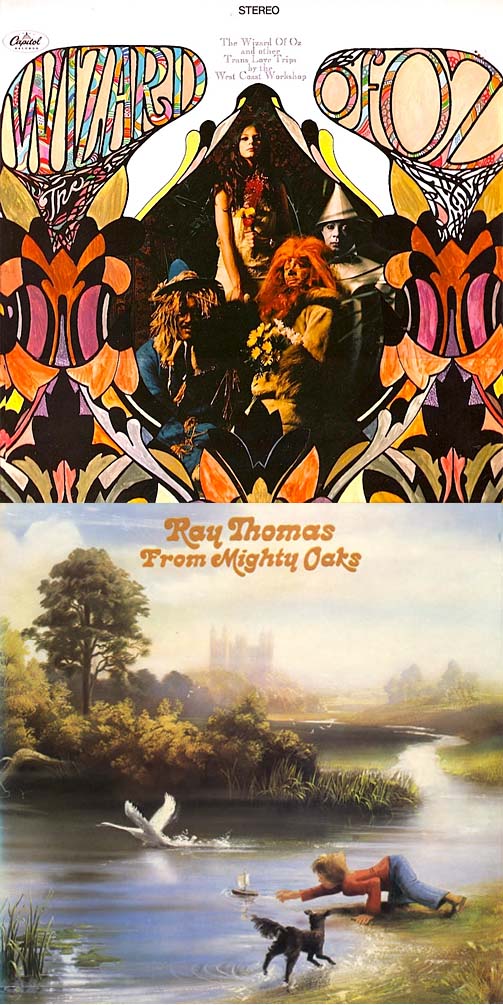 The first record that I duped over to MP3 format was the one that pushed me over the edge into buying the USB turntable in the first place. Originally issued in 1967, The Wizard of Oz and Other Trans Love Trips by the West Coast Workshop (Capitol ST 2776) has been out of print pretty much ever since its first release, and when a small independent label named Relics finally reissued it on CD late last year, the sale price at Amazon tipped the scale at $20.

No matter how much I remembered enjoying that old record and wanted to listen to it once again, the Scrooge McDuck in me could not abide spending that kind of money to replace one LP that was sitting right up there in my closet, especially when the turntable that would allow me to convert it and all the rest of my LPs only cost $40 more. It was only natural then, that the first platter to hit the spinner was this one... and what a thrill I got setting the needle down and hearing the opening strains of this little gem once again, for the first time in probably a decade.

From the title and the release date, you’ve already guessed that this isn’t your traditional Wizard of Oz. Using just three of the classic Harold Arlen / “Yip” Harburg songs from the 1939 Oz as a jumping-off point, the Workshop -- a modern jazz ensemble conducted by someone with the impossible name of James E. Bond, Jr., who with producer Nick Venet also wrote all the new music -- takes off into a mostly fascinating and even charming series of riffs ranging in style from classical Baroque to acid jazz. Quoth the liner notes, “You’re off to see the Wizard, but you may find yourself looking through prisms and waterfalls along the way.”

As a child in the late ‘60s, I thought this record was weird, but in a fascinating way. As I grew into my teens, I kept coming back to it, and the sense of its weirdness gave way to a sense sense of wonderfulness. I never really stopped listening to this album, because whenever I came back to it, at whatever age, it rewarded the listening with what I only gradually came to realize was its sophistication. It’s still as fresh today as it was when it was first released, and that’s no mean feat... knowing as little as I do about jazz, I would still venture to say that this is a largely undiscovered and unknown classic of the genre. Now, in my fifties, it’s a gift to be able to stroll down its psychedelic brick road again, as often as I want, and to share it with others, which I am happy to do.

The album cover (pictured above) is kind of smashing. With its hand-colored stained glass motif framing the center image, it’s a classic ‘60s design, connected to the art neuveau twenties revival, psychedelia, and its combination of adult and childish sensibilities. The grown-up Dorothy very much in command of her jazz-trio, turned-on Oz friends is a smashing image, and the kind of vaginal frame that surrounds them delivers an intentionally subliminal message. Is that a black dude as the Tin Man?

Rediscovering my old record collection has not been, as you might guess, all hearts, flowers and psychedelic yellow bricks, but so far, the only record I’ve duped that made me want to rip it off the turntable and fling it out the window like a frisbee was Ray Thomas’s From Mighty Oaks (Threshold THS 16). It seems that the members of every famous band want to get away from each other now and then, and The Moody Blues were no exception. But, no fools, they -- even when they released solo albums, as nearly each one of the band members did in 1975, it was a coordinated effort. Hayward and Lodge, Edge and Thomas each had almost-concurrent solo releases that even seemed to be designed to color-coordinate in your record collection.

I’d long felt that -- second only to Mike Pinder, who’d left the group by then -- Thomas was the most brooding and therefore one of the more interesting members of the group. As flautist, he contributed to their sound in an important way, and he wrote some darkly strange songs for them, especially “Dear Diary.” When I saw the three albums in the rack together and had to choose just one, I ruled out the pretentious Grahame Edge right away, and ended up bringiing home the Thomas. It’s one of those records that’s kind of haunted me ever since... excepting only the title track, this can’t even qualify as a guilty pleasure. It’s more like something you’d like to bury.

Far from brooding, Mr. Thomas seems to have discovered Nature, and the discovery seems to have filled him with sunlight. I’m happy for him, but it caused him to put out a record that put the “sip” in “insipid.”

From Mighty Oaks starts out well enough with a kind of pop-classical full-orchestra overture, but the minute Thomas opens his mouth on the second cut he’s in trouble: as you can probably tell from the title, “Hey Mama Life” has some of the most inane lyrics you never wanted to hear, and unfortunately it goes downhill from there. By the end of the album we get a song called “I Wish We Could Fly” with lyrics that go like this:

Calgon, take me away! In between there’s a song called “Adam and I,” about Mr. Thomas’s young son. The message of the song, delivered with extremely heavy hand, is that Mr. Thomas likes his young son. I’m very happy for him, but personally, I don’t give a shit.

Thomas has a good strong voice, but he’s singing with the backing of a full orchestra here, and sometimes the effect is overpowering to the point of being, well, comical. Perhaps the key here lies in the words, “Produced by Ray Thomas.” Sometimes self-producing, like self-editing, is a good thing... other times, this happens. Thomas had another solo album after this, called (are you ready for this?) Hopes, Wishes and Dreams. Kind of makes you want to get out your Blue Mountain Arts greeting cards and read them again, doesn’t it?

Oh, well... the LPs can’t all be winners... and heaven knows they weren’t. Memory Lane may be lined with beautiful flowers, but mind those potholes!