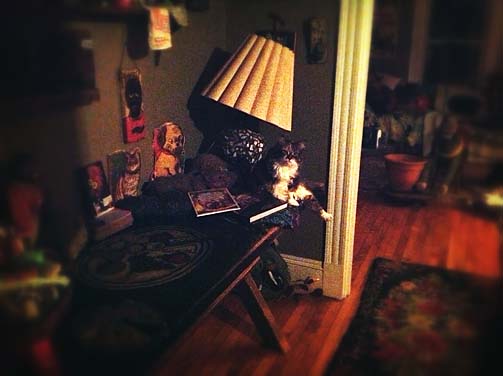 I feel like the blog was a lot more interesting back when I was a desperately unhappy drunk. Grief and misery make for a lot more compelling reading than the sort of things that come out of the typing fingers of a relatively contented person. Being of good midwestern stock with strong Scandinavian currents in my blood, I do actually feel guilty about this. A writer has a responsibility to his readership, and I feel like this blog was built on a foundation of Angst that I’m just not feeling right now.

If it’ll help any, the first real bite of winter has finally sunk its teeth into New England; but even that has not got me down this year... for the first time in I can’t remember when, I don’t actually have to go outside in this crap. I shoveled my front walk this morning -- took me maybe fifteen minutes, that was the extent of my Winter Inconvenience so far.

Misery being the resilient thing that it is, I know that it’s never far away and that it’ll probably be back... so that’s why I’m enjoying myself while I can, doing the blessing-counting thing and not spending all that much time looking back. It’s pretty dark back there. When you’ve been living in a dark, dank hole in the ground and you finally manage to climb out into the sun, you don’t waste any time looking behind you back down that hole, do you?

Here’s something interesting, though. An intangible part of the past may, somehow, have managed to come with me from the old house. I’m going to be careful here and not make any claims at all. I’ll just tell you what happened.

I’d noticed for some time that the cats liked to sit on top of the wooden table that my mother carved and painted all those years ago, and which used to sit in the kitchen of the old house. My mother spent most of the last five years of her life sitting at the end corner of that table. It’s in my dining room now, here in the new house, against the wall, the only place here where I could put it.

Now, there are lots and lots of comfy places for quats to lounge around in this house. Lots of soft furniture, sofas, chairs, even a cushy cat bed and a nice rug right in front of the gas fire. By contrast, that table is hard and bare, and it’s in a cooler room, and it’s far from the comfiest place a pussycat could want to sit on. And yet, all four of them spend a lot of time on and around that table. For a while, my little Honey even made a point of squooshing herself into the corner spot exactly where my mother used to sit.

I didn’t really think too much about it. It was just something I noticed. Then one day, I needed a place to do a tarot reading, and the center part of that table was just the best and most convenient spot. Still is. I use it regularly for that purpose. But at the time I’m speaking of, this was my first tarot reading in a while -- and it was the very first time that I had sat down at that table since it was moved from the old house, which was (I can hardly believe it myself) going on two years.

-- And the moment I sat down at that table, I felt a wave of -- something -- pass through me. It was a kind of energy. It was strong. I jumped up from that table.

On a hunch, I fetched my iPad and launched an app that purports to allow EVP sessions. These things... I dunno. I’d played with it before in the house, and mostly I got nothing. When I did get words, they were always random nonsense words.

When I set this thing up at my mother’s place at the table, I suddenly got a flood of words... and they made sense. Whatever it was seemed to respond intelligently to my voice. Over the course of several sessions, it spoke of bills and taxes, of diabetes and doctors and of a leg and fear. (My mother’s right leg was amputated below the knee due to complications from diabetes. She never fully recovered. Her final months were plagued by financial worry). At the beginning of one session I asked, “Are you here, Mom?” -- and the machine immediately responded with: “Present.” Later in the same session, I felt something stroke my hand.

When stuff like that happens, your mind actually goes into denial mode. You start to say to yourself, no way did that just happen. This isn’t happening because it can’t happen because things like this don’t happen.

So -- I’m not making any wild claims. I’m just telling you what did happen.

www.ducksoup.me
Posted by Freder at 11:52 PM