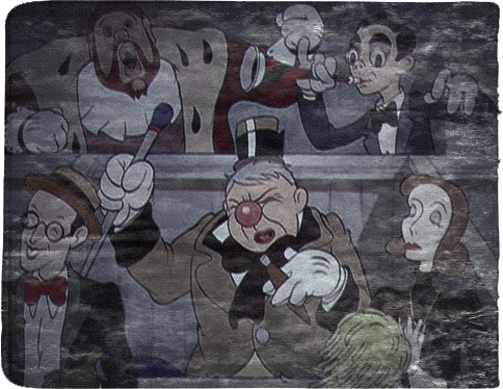 “Twas Movie Night here at The DuckHaus this past Friday, something that’s becoming a congenial every-month-and-a-half or so tradition around here. I do confess that I dislike going out, but having folks come around here every once in a while is another matter. An evening of company and snacky treats, and then they go away -- works for me!

I think I’ve mentioned this a time or two before here at the blog, but if you come to my house for a Movie Night you’d best be prepared to hang out for a minimum of three hours. In addition to the feature, I always lead with a cartoon, a comedy short, and an episode from a serial. I’d run a newsreel, too, if I could get my hands on any, but it strikes me that the DVD boom and the wave of film restoration that it helped bring about stopped short of rescuing the newsreel. Leastways, I’ve never seen any DVDs that offer complete newsreels; the closest anyone comes is Warner Brothers with its “Warner Night at the Movies” bonus features, which do sometimes feature one-off newsreel stories.

It seems strange to me, because from a historical standpoint I would think there’d be a lot of interest in something like that. But what do I know? I’m still waiting for Lili, the original Willard and A Thousand Clowns to come out on DVD, too. You’d think they’d be no-brainers. On the other hand, I am sometimes forcefully reminded that my interests are esoteric, to say the least.

The feature the other night was Jean-Pierre Jeunet’s breakout hit Amelie. Normally I let my guests vote on the feature, but this time I made a command decision after learning that none of them had seen this, or any of Jeunet’s pictures. For me, Amelie is a must-see movie, and furthermore the dead of winter is a really good time to watch it. Why? Because the movie is so visually rich and warm that it helps take the edge off a frigid black winter night. Try it and see if you don’t agree.

At least one of the multiple story-lines in Amelie is 100% true, and actually happened here in Southern Maine. No one in the local press picked up on the fact that Jeunet had sucked up a popular local story and Frenchified it and put it into his movie. That’s the calibre of local journalism for you. As far as I know, my mother and I are the only ones who noticed this little filmic slight of hand.

For the serial -- we're up to Chapter Eight of Republic's 1941 wartime comic book epic Spy Smasher. Although  this episode flagged a bit -- something to be expected shortly before a serial gathers itself for the episode 12 finale -- chapter eight had the best out-and-out comedic moments in the whole series as the title character infiltrates a warehouse from where Nazi saboteurs are shipping mines. In a truly ham-fisted move, Spy Smasher knocks over a stack of crates for no reason other than that the writers needed to think of some way for the Ratzi henchmen to find out he was in the warehouse. Henchman #1 then draws his gun. Henchman #2 admonishes him, saying, "Don't use a gun, stupid! This place is full of explosives!" Cut to Spy Smasher hiding behind his fallen crates -- sheepishly holding his gun. Which he then proceeds to look at, as if to say, "Duhhm, uh, D'OH!" before, looking like an idiot, he shoves it back into its holster. This scene brings audible laughs from every audience I've shown it to.

But the real hit of the night was one of only a handful of short subjects that W. C. Fields made in his lifetime, The Fatal Glass of Beer, a Mack Sennet parody of silent-era melodrama that taps pretty deeply into The Great Man’s sense of the ridiculous and his vein of surrealism. Virtually plotless, it’s Fields in The Frozen North facing the elements and a deadbeat son on a night that “ain’t fit for man nor beast” -- but watch out for the offscreen stagehands when you say that line, because it’s a cue to get pelted in the face with a handful of obviously fake snow! This was one of those things that caught us in just the right mood, I think... and it certainly was proof that comedy plays better when there’s more than one person in the room.

I know that Fields isn’t to everyone’s taste -- when I was in for detox the third time, my RN at 4 East, an otherwise terrific woman, looked at me terribly askance when I mentioned his name -- but here’s my take on Fields the man: I suspect that he was a dreamer and a pure soul who had been battered and kicked around pretty hard by life, and had survived only because he also had a streak of cunning. I think for most alcoholics, drinking is their way of filling the gaping holes in their spirit. I doubt that Fields was any exception. He made a kind of poetry out of his addiction. Perhaps he didn’t do us other alcoholics any favors in the process. That’s not his fault. All true comedy is based on pain.