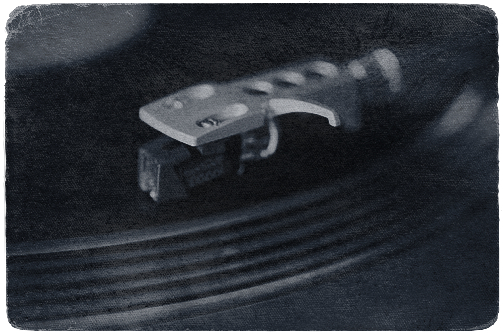 With all of the big expenses connected to my OUI of last year finally behind me, last week I kept a promise to myself and ordered up a USB turntable so that, at long last, I could covert all my old vinyl LPs into MP3 format. At $65, it was more money than I felt I could afford to drop on a single, self-indulgent buy... but when I totted up what it would cost me to replace the albums individually, that amount became insignificant in nothing flat.

The thing is, I haven’t been able to listen to any of my vinyl records in, conservatively speaking, eight or nine years. That’s how long it’s been since my old stereo system went belly-up -- and I never felt that I could afford to replace it. Vinyl being a dying technology by then anyway, I was unsure of what step to take next... and so I remained true to form and did nothing. Don’t ever confuse me or offer me too many choices, because the effect you’ll get will be exactly the same as if you’d tossed me into a vat of fast-drying concrete.

Meanwhile, music that I loved, the music that raised me, the music that was inextricably grafted onto my DNA, just sat collecting dust on the shelves of my closet, and I forgot. I forgot the places that it took me, and the things that it drew out of me. I forgot that whole part of myself. Instead of consoling myself (and fueling my dreams) with music, vodka became my balm of choice.

After my mother’s death, when there was suddenly a lot of empty space to fill in just about every sense of the word, I did make a start at replacing a few key albums on CD. This was an expensive enough proposition that I could only do a little bit of it every once in a while. Some time back I wrote about my joy at rediscovering Melanie Safka. These were little flashes of light in the dark.

The turntable arrived just two days after I ordered it, and after making an extremely easy connection to my iMac I got my LPs out of the closet and dove right in. And O My Brothers and Sisters, it was just like having a part of myself that had been locked, chained and bolted up for a decade suddenly flung wide open.

My first thought was that “joy” was the word to describe the sensation. Music triggers responses and memories even when it hasn’t been locked up in your closet for ten years. But that’s not it.

“Fortunate” is the right word. This is yet another gift that I have been given, in a string of gifts that have piled up recently. I’m writing again, I’m drawing again, I have the time, the will and the energy to do these things, and now a big hunk of my past has been given back to me. I had better be very damned grateful, because I am one fortunate bastard... one seriously lucky alcoholic.

The benefits are so many and the emotions so complicated that I will be writing about this project here for some time to come. At times during the process I have been made almost deliriously happy; and at times, looking back on a different world as much as forty years distant, a cosmos that was supposed to be immutable, that was never supposed to be any different from the way it was in that exact moment, I’ve been brought to tears. Too many people are gone. The sense I once had that the things people do actually matter -- that’s gone, too.

But it’s nice to walk that way for a little while once again. Just getting the albums out and sorting them into categories (“Okay -- these need to be done right away! These can wait a little while...") was a delight. The CD never did match the LP as a physical object, as a playground for designers to do their work, and so the tactile and visual pleasure of looking through my collection again made me happy all by itself. I’ll be writing about that a lot in weeks to come: nothing, but nothing in our culture has filled the vacancy left by the record album cover as a Pop Culture icon.

When the time came to actually put the needle down on the vinyl, I realized that I’d forgotten how to do it! Here’s something that we used to do every day, almost a ritual: slide the sleeve out of the album cover, slide that black pancake platter out of the sleeve and slot the hole onto the spindle, then raise the tone arm and bring it down ever so gently at the beginning of side one: I really had forgotten how to do it, and I missed the first couple of times! How quickly modern advances cause something that was once second nature to seem actually strange, actually unusual and archaic!

Then the music came. Consider this the first of a series.

Just to put the whole thing in perspective, I have to start out by saying that it hasn’t all been total, unmitigated Nirvana. Sometimes you go back to revisit something and end up wondering what it was you saw there in the first place! In that category, this morning I duped over my copy of Neil Diamond’s 1972 album, Moods.

Diamond was a big favorite of my cousin, Charlie, and so I inherited my interest in Diamond, in part, from him. Now, Mr. Diamond has written some great songs, and I still love some of them -- “Cracklin’ Rosie” and “Solitary Man” are just two that still hold up to this day. I know blamed well that he must have put out better albums than this one. I’m thinking Tap Root Manuscript, although I haven’t heard that one in more like thirty years. From Moods, Diamond had a big hit with “Song Sung Blue”. In its day, it was a light, easy song. Today, the word I’d use is “insipid.”

Moods is one of those albums that just hasn’t aged well at all. Even its name is enough to make you cringe. The cover design, with its rough paper, pastel colors, torn outer edge, and chancery-style lettering evokes nothing so much as a Blue Mountain Arts greeting card in all of its nauseating faux-profundity.

I hate Blue Mountain Arts greeting cards. We should be using them to torture terrorists with. “My very special daughter / son / wife / busband/, so close to my heart, you may not understand just how much your life means to those around you...” Fifteen minutes of that puke and they’ll stanching the flow of blood from their ears, pleading for mercy and divulging Al Quaida's darkest secrets at a speed that the fastest shorthand transcriptionists won't be able to keep up with.

Maybe that’s why I felt like punching Neil Diamond out by the time I was halfway through side one. That’s an exaggeration for humorous effect, but really, can anyone listen to Diamond getting oh so dramatic in “Canta Libre” with a straight face? The bouncy, upbeat tunes are worse. “Gitchy Goomy” and “Porcupine Pie” -- are you kidding me? What iteration of Romper Room was he watching when he wrote this crap?

More to the point -- what was I thinking when I was listening to it all those years ago? I’ve been exposed to much better music since then, thank God. In a way, it’s good to have things like Neil Diamond’s Moods around as a reminder not just that that Memory comes with rose-colored glasses, but that after all you have grown during all those intervening years, you have learned a thing or two, you haven’t suffered all this punishment for nothing: now at the end of this long and winding road, at least some of your tastes have improved.