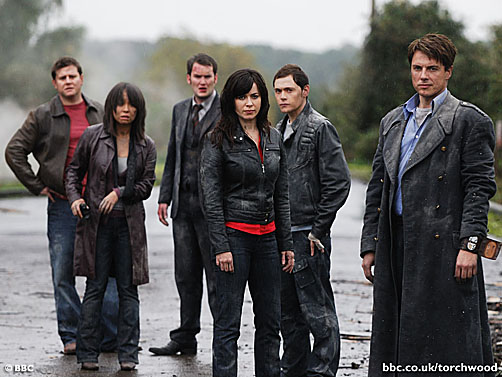 I have to hand it to Russell T. Davies: in Torchwood: Children of Earth he created a scenario that was as uniquely horrific as anything ever attempted on television. Only the most curmudgeonly, the most heartless of viewers could possibly watch the final episode without being shaken by scenes of uniformed men, men that we are conditioned to think of as our protectors, literally dragging screaming children out of their homes to be handed over as a mood-altering substance for an alien race. “Disturbing” doesn’t begin to do it justice. And yet like all the best horror thrillers, Children of Earth leaves the most nightmarish elements of its plot up to our imagination.

By rights, Children of Earth should have closed the book on Torchwood, and given Davies’s deliberately deconstructive approach to the series since its inception this would would have been the appropriate way to go out -- and a spectacular end to the Torchwood saga. Regrettably, to our point of view if not to the BBC’s, in 2011 Davies reunited the team’s last surviving members for a British-American co-production airing on STARZ called Miracle Day. I haven’t seen it, and have no plans to do so. Having just completed the original series, I feel strongly that Children of Earth is where it ended. For me, that’s the way it is going to stay.

Torchwood burned brightly for something that started as nothing more than an anagram of Doctor Who. When Davies and Julie Gardner were boldly resurrecting the venerable old BBC classic but wanted to keep the project strictly hush-hush, they called it “Torchwood” for secrecy’s sake. Shortly into the second season of the revived show (and whatever my reservations are about the details of Davies’s tenure on Who, it was a successful revival that made it possible for Stephen Moffat to be blowing our socks off today), the Doctor royally pissed off Queen Victoria (played by the always-delightful Pauline Collins), who responded by creating a super-secret branch of the government devoted to thwarting him in all his incarnations: said branch to be called Torchwood.

This was not yet asking for a spin-off.

For that to happen, they needed something else. Turn back the clock to season one of the revived Who, and a character created by the aforementioned S. Moffat: a rogue from the future stowing away in World War II-era London under the false name of Captain Jack Harkness. As played by the impossibly, abominably, unfair-to-the-rest-of-the-male-species handsome John Barrowman (how handsome is Barrowman? Barrowman is so handsome that during the course of Torchwood he turns at least one straight guy gay, and you don’t even bat an eye. I have a friend who, really and truly, only wants to know one thing about Torchwood: do we ever get to see Barrowman naked? Well, yes, R______: in Children of Earth we do finally see Barrowman bare-ass naked -- but he’s had steady work for a few years as a result of the Harkness role, so he’s put on a few pounds from when he first took the part. I’m just sayin’), Harkness was popular enough in his first appearance that Davies brought him back, made him a regular, played up the sex angle, and, oh yeah, made him immortal. It was a little accident with Rose Tyler and the Daleks what caused that. Captain Jack Harkness can die, all right, and he does so with alarming frequency all through Torchwood... it’s just that he keeps bouncing back.

The Torchwood agency as established still was not ready to be the focal point of a series: it needed to be deconstructed. And so in series three of Doctor Who, the Cybermen obliterated the agency as we knew it, leaving active only one little branch in Wales, a branch with notably different goals and aims from the parent, and headed by, you guessed it, Captain Jack Harkness.

After all, anything is plausible when you have an immortal character: all they had to do was trap Captain Jack in the past and give him a reason to become Torchwood’s longest-serving agent.

The first season of Torchwood, the series, debuted late in 2006 with the recruitment of an easily “identifiable” normal person -- a Welsh police woman named Gwen Cooper -- as the newest member of an agency reforged and retooled by Harkness to deal with all sorts of alien and supernatural phenomenon. And what a first season it was! Similar in theme to The X-Files, it simply blew The X-Files out of the water on just about every scale that these things are measured on. The characters were more realistic, more interesting and certainly more charismatic; the stories were more human, and the mythos benefitted from its loose connection to Doctor Who while steadily building a flavor of its own.

If Davies’s Doctor Who was good, Torchwood, which gave him more creative freedom, was fantastic. For a while.

It should have lasted for years. It should have lasted for a decade. Instead, the seeds of doom were sown in the final episode of the first season, which went so far over the top in terms of its plot and action that it actually left “over the top” behind in the dust. It tossed all credibility aside and went into the world of comic-book sensibilities, with a giant flaming devil stomping around in New South Wales, and Captain Jack facing it down single-handed because, well, he’s the only one who can without dying. It was a lamentable and misguided turn for a series that had taken nothing but surefooted steps up to that point. And from there, it went downhill fast.

In season two, Torchwood fell into the X-Files trap and allowed its plots to become increasingly self-referential and inward-turning, when any sensible producer knows that a second season is when you should be expanding your territory. “The Hub,” which was just something to hang things on in the first season, became the focus of season two. “Weevils,” which were a cute little one-off menace for season one, started popping up every-goddamn-where. There were character stories, yes: but it’s a bad sign when you’ve already got one immortal character, and your biggest character story of the season consists of killing off another one and then bringing him back as an animated corpse (which didn’t work anyway; Burn Gorman as Owen could be seen breathing every time he had to emote, even in a scene that specifically called for him not to be able to give the breath of life!).

Davies had literally been deconstructing Torchwood since before the series premiered, and so it perhaps should not have come as a surprise when, in a really heartbreaking final episode, he literally wiped out half of the regular cast in one fell swoop. I think if I’d had him in the same room with me I would have slapped him, or at least shaken him. I’d have shouted at him, as I damn near shouted in my library: “Dude, what were you thinking? Yes, Owen and Tosh had a losing Romantic Sup-plot going on, but that was your fault, not theirs! Now you have a show -- oh, except that you don’t because you just killed off half the cast!”

With only three agents surviving, Torchwood could hardly be said to be any kind of an organization any more, and as if in acknowledgment of this, Davies actually blows up their headquarters in the first episode of Children of Earth. By episode four he’s killed off Ianto Jones, the only remaining Supporting Character in the agency; so it’s just Jack and Gwen now.

That said, the five astonishing episodes of Children of Earth somehow propel Torchwood back to its former glory; and perhaps the real reason for this lies in its seeming self-awareness that the series is as mortal as anything else and has reached the end of its young life, cut short like the lives of the children that factor as the centerpiece of its plot. With a dark, funereal atmosphere pervading throughout, and loss as its overwhelming theme, it is only appropriate that Harkness and Gwen Cooper say their goodbyes at the end, go their separate ways, and that Captain Jack should return to the stars from where he came.

Both characters are great, strong, deep, mythic, interesting, and have marvelous potential futures ahead of them, each going their separate ways, each going in new directions and possibly to greater heights. But Torchwood? That’s all done now; that’s ended: just smoldering ash and dying embers. Best left to memory.