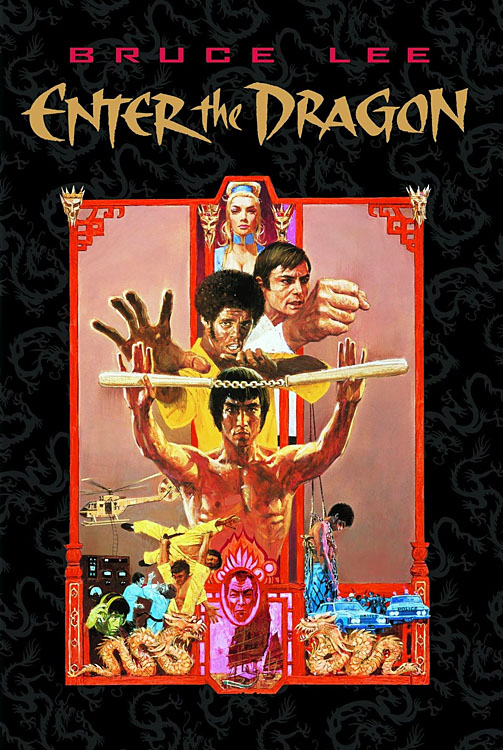 After watching it for the first time the other night, I suppose that I can understand why Bruce Lee’s Enter the Dragon made such a splash ‘way back in 1973, but in the words of Yo’ da Muppet, “Aged well it has not.”

Yes, the location photography is still gorgeous and the martial arts action is still exciting (although even that has been eclipsed by later films, more on that later), but a movie has to be judged on all of its qualities and in every other respect, Enter the Dragon falls embarrassingly on its face. Five minutes into it I was cringing at the dialogue, the hideous low-rent overdubbing, the non-acting, the strictly pedestrian direction. Twenty minutes later I was still cringing, and wondering what was wrong with the people who have proclaimed this painful gobble-gobbler a classic for so many years. I mean, come on, guys. This is a classic? Never mind that, when does it even become watchable?

The “plot” is simply Dr. No with all the suspense, danger and threat taken out of it -- and, if possible, the characters reduced to even more mind-bogglingly shallow figures. The villain presents no global threat but is just a Shaolin priest who joined the Dark Side of The Force and became a drug distributor -- and really, the movie treats his abandonment of Shaolin principles as a much greater crime than manufacturing and selling drugs. The supporting characters played by John Saxon and Jim Kelly are each given their lame excuses for a backstory, but when character development is this ham-handed, a movie is better off without it. One after the other they arrive in Hong Kong, and one after the other they bring the movie to a screeching halt with their moronic, cloudy flashbacks.

In yet another flashback, it’s revealed that Bruce Lee’s Little Sis disemboweled herself with a shard of glass rather than allow herself to be raped by the villain’s Lead Henchman. This is done for no other reason than assure us that Lee is no altruistic hero: he’s going in because It’s Personal. It also “justifies” his fight with the henchman later on, which ends with Lee stomping him to death... Lee accomplishes this with an abundance of emotive over-acting.

Bruce Lee does have screen presence, but that’s not enough to hold a movie together all on its own -- and honestly, it was his presence that made me not like him very much. To me he came off as arrogant and full of himself, even crowing like a rooster as he beat people up. Lee is so cocky and self-absorbed that Sean Connery’s Bond looks humble beside him. This is not a guy I would want to have lunch with. Something tells me that he would spend the whole time bragging about all the people he’s beaten up.

And that’s another thing. In the opening match, the buff, lean, tightly muscled Mr. Lee fights against a lumbering fat man twice his size with no muscle on his body, clearly out of shape, clearly not a threat at all. Lee comes off as a bully. It goes downhill from there. With the exception of one hulking brute that Lee never gets to fight, all the opponents that he takes on are shown as being smaller and weaker than he is. They come at him in numbers, true, but in the close confines of the secret lair in which most of the action takes place, their numbers actually work against them. What should be an impressive display of defensive martial arts mayhem becomes a rote exercise of Lee shooting fish in a barrel.

The finale, in which he squares of against Dr. N-- I mean “Han” himself (going Solo against Han, so to speak), is no different. Oooo -- can Bruce defend himself against a one-armed old man? I dunno... better put them in a hall of mirrors just to make it a little interesting, even if that does bring the action to a screeching halt... which is okay, because it gives Bruce a chance to stop and reflect back on what his Master taught him about Mirrors at the beginning of the story. This is about the only thinking Lee does in the whole film.

In recent months I’ve watched a bunch of martial arts pictures and written about them on this blog. Not all of them were great. But even the worst of them looks like Casablanca next to this sleepwalker. They were written and directed by people who know their craft, not by a pack of amateurs seemingly making it up as they went along. They starred people who could do all the things Lee does -- and act as well. If they sometimes were too ambitious for their own good, or ventured too far out into the Lunatic Fringe... those are flaws I would settle for rather than an incompetent script by an obvious tyro and a hack-job director who trips over himself every time he tries to frame a shot.

I’ll take Donnie Yen, Jet Li, Michelle Yeoh, Zhang Ziyi, Chow Yung-Fat and even Sammo Hung over Bruce Lee any day, except I have to give Lee the credit for one thing: he was the one who gave all of those people their opportunities.

If by opening the door for a whole genre of movies, good bad and indifferent, a movie becomes a classic whether it is itself good, bad or indifferent, then Enter the Dragon is a indeed classic, because it certainly did open the door in the West for hundreds and hundreds of moves that followed.

But on its own terms? As a movie that has to sink or swim on its own merits? Enter the Dragon has very little merit, and deserves to be remembered today only as the Swan Song of an action star who worked assiduously and with honor to get where he was, but who in the end deserved better.