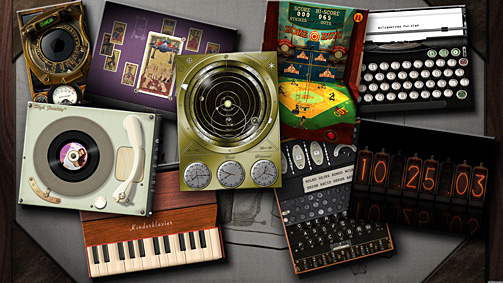 One of the better examples of my perversity is that the only reason I finally knuckled under and got myself an iPhone was because I liked the anachronistic image of a person who dresses the way I try to dress in public -- extremely old-fashioned, as close to the manner of the 1930s and earlier as my budget will allow -- carrying a device that is so technologically advanced, and which performs so many other functions than just making and receiving phone calls.

To carry that perversity to its extreme, I immediately set about tricking out my iPhone and iPad with gadgets that marked me, I’m afraid, as being Hopelessly Steampunk: apps that perform Marvelous Functions, but which look, sound and act as if they came out of the early part of the last century,

For instance: I’m typing this now on miTypewriter. No, not my typewriter, but miTypewriter, a delightful little app that turns my iPad into a very nearly fully-functional Underwood vintage typewriter. The keys go clackety-clack in that satisfying way as I work, and when I reach the end of the line a little *ding* reminds me that I have to manually hit the return arm. If I make a mistake, I have to hit the backspace button repeatedly until I’ve gone over it. The paper climbs through the typewriter as I work, and I can see that the keys need cleaning; that’s all right. One page at a time is all I get... when I reach the end of the page I have to take it out and start with a clean one. Spell check? That's for wimps. Everything is fully animated; except for the fact that the iPad is light as a feather, and the pressing of the keys requires no effort at all, the illusion that I’m working on an actual vintage typewriter is pretty darned convincing, and y’now, it satisfies something in my neural pathways to have this kind of writing experience restored to me.

Likewise, I recently spent 99¢ on an app called Vinyl, and it is the best 99¢ I have spent in a long time. My friend BC dismissed it as being something that “makes your iPad look like an old record player,” but if that was all that it did, the app would be silly and pointless. No, my fiends. Vinyl completely recreates the experience of playing music on a physical record player, from leafing through your album collection and putting the platter on the turntable to picking up the tone arm and setting it down on the spinning record (which rotates at 33 1/3 for LPs and 45 RPM for singles, just like the real thing)! Do not expect to hear any of this Thoroughly Modern, squeaky clean, digitally sterilized sound, either: what you get from Vinyl is what vinyl delivered: a slightly muffled sound augmented by the wonderful scritching and scratching and pops and pips of a physical needle dragging along a physical vinyl record. Crackle crackle crackle! If you grew up listening to music this way, you know what I mean, and you know what you have been missing. The tone arm actually moves across the virtual record as the record spins round and round. And Vinyl even divides the albums into two sides, so that if you want to listen to the whole album, you have to stop the player at the end of side one, flip the record over and put the needle down at the beginning again.

This is the way music was meant to be listened to! None of this twenty-first century automatic playlist crap. Oh, the luddite in me is sweeking with glee over this one.

For the more esoteric-minded among you, after much scrounging and searching of the app store I discovered a neat device called Phaeton. There are a number of really good star-tracking and planetarium apps out there and I use several of them across all my devices. But I was on the lookout for something that did it the old-fashioned way, and Phaeton is just the ticket: in one great-looking app it combines three devices: an orrery (the witch in The Dark Crystal had a big one of these in her house), a tellurion, and an astrolabe. All are full-functioning if you know how to use them (I confess that I don’t, although it’s fun to track the weekly movements of the planets in the orrery). For all you budding Alchemists out there, this is your key to the cosmos, if you will, all neatly stowed in your iPad -- and honestly, it just looks great sitting open on the desktop in your study. At its base, under the main viewer window, all set in virtual brass, three clock-faces keep track of Solar, Civil and Sidereal time. With Phaeton, any Lady or Gentleman will always know exactly where they stand in the Universe.

That technology can be used to take us back -- that it can be used to make a super-slick, super-powerful device behave like a device that has character, while still retaining its super-slick qualities... this is what makes geeks geek out the geekiest, I think.

On my iPad i also have:
And that’s just my iPad. I won’t even begin to describe the arcane devices on my phone.

Now, honestly, all I need is an app that will turn my iPad into a TARDIS. I’m ready.