The Hobbit -- An Unexpected Enema 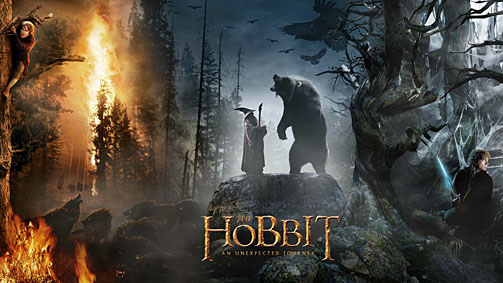 Well-- The Hobbit is out and I was excited to see it, until I heard that Peter "I'm Making It As Long As I Can" Jackson had taken their already inflated game plan and pumped it up even further.

The concept all along was that this was going to be TWO movies to adapt The Hobbit, which I thought was already a bit much. Any director worth anything could tell that story in one three-hour movie or two 90 minute ones, but two three-hour movies was stretching it dangerously into the territory of Jackson's god-awfully bloated, self-worshipping monolithic piece of crap King Kong.

But now I learn that four months ago while they were assembling installment #1, Jackson decided to blow it up even further, and make it into THREE movies.

This is just crass money-grubbing milking of the property until it is bone dry.

This is GREED, pure and simple.

This is just like Christopher Tolkien for all intents and purposes publishing volume after volume of his father's fucking LAUNDRY LISTS fer chissake and expecting fans to lap them up.

There is NOT enough story material in that little book to sustain three movies, PERIOD. This is just pure bullshit. Nearly NINE hours to tell the story of The Hobbit? Rankin-Bass did it in 70 minutes.

It makes me SHUDDER to think how freakin' long the inevitable "Special Extended Edition" DVD is going to be -- but I don't want anything to do with it.

Honestly, I'm not even going to the movie theater to see this, and I really did not expect to be saying that. I was as excited as anyone for this. But when you're sticking things like fist-fighting mountains into Tolkien for no better reason than to take up screen time, you have crossed the line from storytelling to making theme-park rides.

No, I'll wait for the DVDs, and I'll wait until they are cheap. I just am not going to be taken advantage of by this bubble-headed New Zealand jerkwad and the sticky-fingered, cleft-tongued corporate catamites that he works for. It confirms what I've long suspected: the man needs to be kept on a leash.

ADDENDA: Now I'm reading interview comments from Peter Jackson claiming that there's material in the appendices to The Lord of the Rings that indicates Tolkien was planning to publish "an extended version of The Hobbit."

Can you see the idiocies in that statement before I point them out?

First -- so Peter Jackson is now claiming that he can see into Tolkien's mind, heart and soul and say that he really intended to do something that he never showed any sign of wanting to do in his lifetime? ... this is pretty stupid even for Peter Jackson.

Second, he's crediting Tolkien for possessing his own 21st century movie blockbuster mentality, which is that more of everything is necessarily and by definition better.

Had Tolkien wanted to expand The Hobbit, he certainly had the opportunity in his lifetime and could have done it.

That fell down to his son and the various publishers and hangers-on over the years.

The Silmarillion is, I think, a perfect example. It did not get published in Tolkien's lifetime because it was unfinished -- and it would have stayed unfinished as long as he lived, because The Silmarillion was his hobby, something he was doing to please himself and no one else.

But now, in his turn, Peter Jackson is having a good wank on us all.

I just can't resist. I'd like to be the first one to call for a "Special CONDENSED Edition" DVD for those of us who would like to be able to get through the whole story in one three-hour sitting! Time-Warner, are you listening???