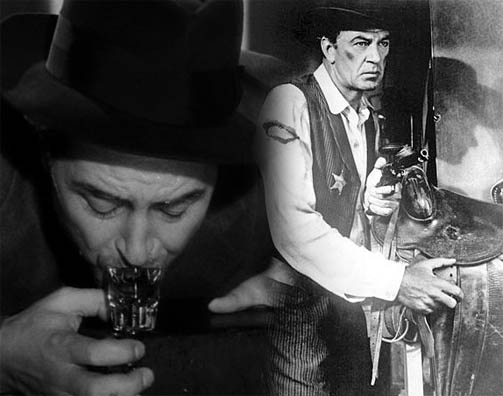 If you had asked my conscious, thinking, sensible self if he had any notions or intentions of walking out of his job without even giving two weeks notice and with nothing else lined up I'd have absolutely one hundred percent said No, Not, Nien Not Never, and Oh, by the way do you have a million or so to support a struggling arteest? Because, you know, if you twisted my arm I could be persuaded to change my mind!

And yet on June 21 I believe that some lower-than-conscious part of me made a more or less conscious decision without my, so to speak, written consent. Whatever part of me that it was, I honestly believe that it metaphorically grabbed by the arm, and said to me, "Come on, kid, this place is part of what's killing' ya. I can't let ‘em do it."

This low “friend,” this part of me who comes from the bowery of my mind, the bronx of my Id, the Hell’s Kitchen of my repressed feelings, this Mike Hammer of the undared and unspoken, the guy you never want to let into the living room, took me by the arm, drew me to the counter, circled my hands around the bottle and glass. “It’s almost time to go back there, kid,” he said. “Have another drink.”

“Okay, now have another. Don’t stop there. Keep goin.’

This disreputable friend got me into a lot of trouble, much of the fall-out of which I can still only guess at – but for the purposes of this post let’s just begin and end with the loss of my job.

On June 19 my boss eviscerated me in a performance review with a bunch of trumped-up malarkey while her boss sat there and watched. Then she said, “Do you agree with these comments?” In no way did I agree, but I said yes, and like a good little Concentration Camp prisoner, I zigned ze papairz zat zey put in frwunt huff me.

What I didn’t see then, and just realized today, was that the paper I signed that day was the college’s way of making that “herding” motion that a person makes with their hands when they are trying to manipulate an animal into a pen, or towards a door.

In my case, pen or door, it didn’t make any difference to them, one way or the other.

And hindsight being what it is, I wish that I was in better touch with that other man inside me, whoever and whatever he is, the one who grabbed me by the arm two days later and said, “Come on, kid, I won’t let ‘em do it to ya.”

-- and stand up in front of those two wicked people, and let that piece of paper just drop of its own weight down onto the desk between the two of them, so that I could say, firmly, but without meanness, “You can keep it. I quit.”