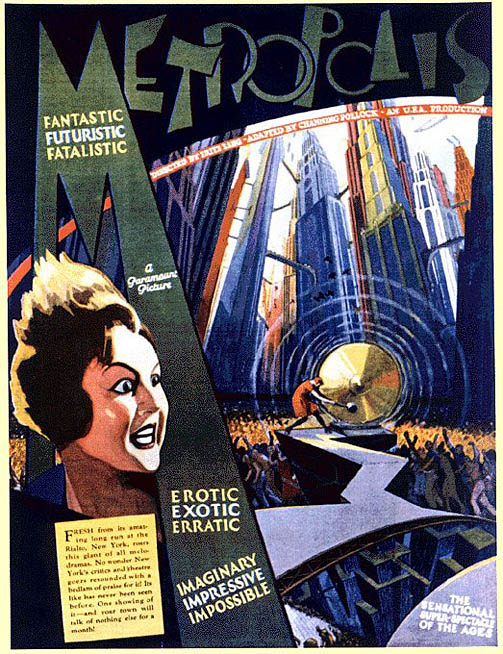 Who doesn't know about Metropolis (and, if they don't, who can't find out about it, with much more scholarly information than I could give, at the click of a mouse)? If you don't know it, the story behind Metropolis is almost as good as the movie itself. Maybe better. We didn't think a complete version would ever turn up. We were wrong.

Maybe the best thing to do in the case of Metropolis is to go all personal on you. In the early '90s I was working as The Night Guy in a small College Library in rural Maine. At that time, the lower level was a large computer/study hall and a fully enclosed A/V room that didn't see much use. I came up with the idea of running an informal weekly film series in the A/V room and my boss bought it. That was a great time!

So, once a week, usually on Thursday nights, I'd run a full program beginning with a cartoon, a comedy short, a cliffhanger serial (it was Republic's 1941 Spy Smasher, more on that later) and at last the feature. Attendance was usually pretty light, ranging from a couple of people at worst (for my Halloween show, The Abominable Dr. Phibes) to about twelve (surprisingly, for the animated feature Batman: Mask of the Phantasm).

And she did. She came back every week. I overheard her talking to a girlfriend about Spy Smasher once, towards the end of the run. She said, "It's the craziest thing I've ever seen!"

Also towards the end of the run, as the semester was winding down and summer was rising, there was one night when a couple of the students hung around for a while afterwards while I broke down the set up, just to talk. The gal who liked Spy Smasher was one of them. She said, "D'you know which movie was my favorite? Metropolis."

Well, you could've knocked me over with a feather. A silent movie.

She was referring to the Georgio Moroder version, which I ran from a second-generation bootlegged VCR copy. It had only been a few years since the release of the Moroder version, but it was already out of circulation and hard to find.

Like it or lump it, at that time, the Moroder version was the most complete and also the most sensible version of Metropolis out there. But let's be clear: it's not Fritz Lang's Metropolis, and I don't think anyone -- least of all Moroder himself -- ever said it was. It's Georger Moroder's version of Fritz Lang's Metropolis, all decked up with color and bombast, and as such it's kind of a neat example of the pliability of cinema art.

I have a friend who loathed Moroder's pop/rock soundtrack... I rather like it, and furthermore, if that soundtrack -- which featured the likes of Pat Benatar, Adam Ant, Freddie Mercury and Loverboy -- can  help Metropolis reach and speak to a new audience of young people -- as it seemed to do in that little screening room way back then -- I'm all in favor of it. If it plays a bit like Metropolis MTV, thems the breaks. It was a noble effort, and didn't deserve to fall into complete obscurity.

Which of course is what happened. Released in 1984, by 1990 it was almost as lost as Lang's original.

You know by now, don't you, that after almost a hundred years of existing with over a third of its original runtime cut and presumed missing forever, a nearly-complete print of Lang's Metropolis was found in Buenos Aires? You know that this is the Philosopher's Stone of moviedom? This is the Golden Goose that no one ever expected to find. This is like finding the arms of the Venus de Milo.

Which is not to say that every frame of the missing footage is a priceless treasure. Especially in the final third, there's a lot of extra running about that doesn't add a great deal to the movie's profundity. But there is some great stuff in those newly discovered twenty-five minutes O my Brothers and Sisters. I won't spoil it for you. Suffice to say that one of the great missing images, and one that binds Frederson and Rotwang, is finally here, and that Freder's sickbed vision of the Robot's dance at last makes sense. There's much that finally makes sense. There's much that is simply fuller, that breathes more deeply. Metropolis hasn't changed with the discovery of its missing third -- but it has become more solid.

Kino has a habit of doing things up right, and in conjunction with their release of The Complete Metropolis they have also reissued Moroder's version. I highly recommend both of them to you. The two complement each other. And I must say, Moroder got one thing spot-on right that the original version, while authentic, just blows: the final shot.

Now then, you might ask. Freder. Yes. I took it from the main character of Metropolis. I don't flatter myself that I'm some mediator, but I do feel, have always felt, a sense of not belonging in any of the established walks of society. Oh, and it's a derivation of my middle name.