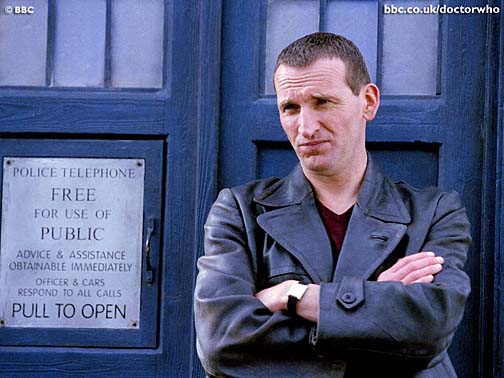 I spent nearly all of the last day of 2011 with The Doctor: the two final episodes of Christopher Eccleston's ninth doctor, and the first two of David Tennant's tenth.

Yeah, I broke down and bought the lot.

Matt Smith is still my current Doctor of Choice, and Stephen Moffat, the current head writer, is simply the best thing ever to happen to Doctor Who, but  I wanted to watch Moffat's earlier episodes on something other than my computer, and I wanted to see how it began, and how it evolved -- And the price was right.  I wouldn't have  paid fifty to seventy dollars a set for these, believe you me.

I give credit to Russell T Davies where it is due; he's a workmanlike writer and he managed to update the series in a way that really caught on with viewers. But I really dislike all the traveling companions that he created (OK, Rose has some good qualities when you get to know her better, but I hate her frowzy bleach-blonde hair and her Cockney accent and the fact that she's just nineteen. I hate her stupid boyfriend and I hate her Cockney mother.) -- and all of the best episodes during his tenure as head writer were scripted by others.

"Dalek" and the WW2 two-parter by Stephen Moffat are smashing examples. This is where the show really takes off. We get to see what one single Dalek can do against a whole army, and we get the first taste of Gothic Horror that oftentimes flavored the classic series.

Christopher Eccleston seems, on the face of it, to be an odd choice for the Doctor, but he's quite good. I ended up liking him a lot. He evokes Tom Baker's manic Doctor, and the gruffness of William Hartnell and adds a scruffy arrogance of his own.

Davies isn't nearly as refined a writer as Moffat, nor as clever, and he's kind of coarse at times (farting aliens? Please!) -- but this is recognizably Doctor Who, streamlined and given the production values it always lacked, and at its best it's great TV.

But just two episodes into the second season, I can already see it going a bit pear-shaped. I like Tennant as the Doctor, but he's barely in the first episode ("The Christmas Invasion"), which, without the Doctor's presence, plays more like a downmarket version of Independence Day. Torchwood is already being mentioned, and the supporting cast is starting to grow. Based on what I've seen of season four, by the time it gets to that stage there are so many other characters getting so much attention that the Doctor is reduced to being a supporting character in his own show!

It was the best possible thing (and the kindest thing that he could do for incoming producer Moffat) to finally strip away all that dead weight and produce one final "season" of one-off specials that featured the Doctor traveling alone. In effect, he pressed the "reset" button so that Moffat could come in and work his magic.

There's one other thing about the Davies iteration (and one that Moffat has expanded upon) that vaguely bothers me. It's what conservatives would call his "Gay Agenda." But introducing Gay characters is not what I'm having some difficulty facing. It's the introduction -- rather, the acknowledgement -- of sex at all! The classic series never, ever acknowledged that people have a sexual instinct. The closest one got to an acknowledgement of sex on the classic series was probably Leela's leather bikini! I'm not saying that it shouldn't have been done (but thank goodness the Doctor himself is still chaste). It's just that for an old fan it takes a little bit of getting used to! Hank Panky -- in the TARDIS! I'm shocked! Shocked!