A Wreath from The Enemy 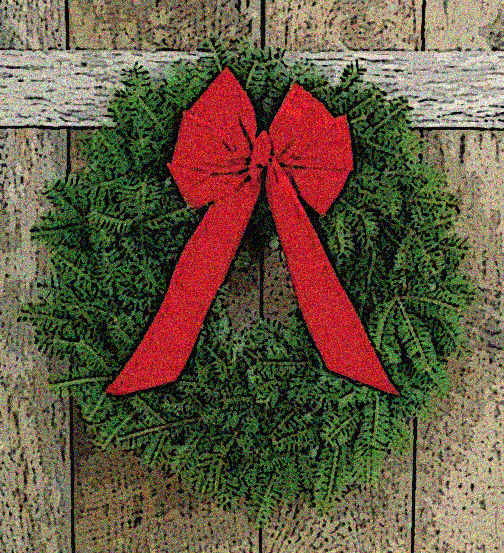 There was a large box on my deck when I got home last night. I thought, "What? I didn't order anything! Did I? Did I order something else while I was drunk and then forget all about it?"

In the dark I couldn't tell where it was from. I had three bags of groceries and my usual shoulder bag, and I tried to manage everything at once whilst simultaneously trying to let myself into the house. Once I got everything into the back hall and hit the lightswitch, I saw that the box was from a Maine wreath company.

I thought, " A wreath? I didn't order a wreath! Who sent me a wreath? What the hell am I going to do with a wreath?"

Truth told, in my new home there's not a single place to hang a wreath. The front porch door is made of glass and metal, no place to drive a nail. On the inner porch door I already have one of my mother's paintings hanging; there would be no point in hanging a wreath there anyway, no one would see it. I finally looped it onto a hook on my deck that I hang plants from in the summer.

It turns out that the wreath was sent to me by the auction house that handled the sale of my mother's estate. When I learned this, and read the insipid note that was enclosed in the package, I just wanted to throw the bloody thing back in their faces. Stupid fake sentiment. They made a lot of money off of my mother, so they send me a damn wreath. A stupid, bloody wreath is not a fair trade for my mother's life. If I had any cojones at all I'd drive over there and toss it onto Mister James Julia's desk, and tell him where he can hang it.

There are many things that went into the sale that are unaccounted for, notable things, prominent things, and the auctioneers are being, at best, coy about the missing items. Among these are a vintage firearm, a very old wood carving of cherubic faces, a soft sculpture of a Phoenix by the Maine artist Dahlov Ipcar, and the eight or ten boxes of vintage comics that actually belonged to me.

My father has been very active in trying to make them accountable for a the first two items. He's had no luck, as I knew would be the case. The auction house holds all the cards. If they say that they never received something, and it doesn't turn up in their records, what are you going to do about it? For my part --

-- I lost so much last year. Just read back in this blog, I won't rehash it. All by themselves, the three days that the auctioneers spent clearing out the house were a brutal gang rape of my life.

I know that my father is frustrated by my attitude about the missing items, but I'm not being blasé. I care about it as much as he does, perhaps more. But I simply need to let go, and declare the past dead. It needs to be over. Engaging in a battle with the auction house is not going to bring me any closer to peace.

But then again, neither is a stupid wreath.