Are You Nobody, Too? 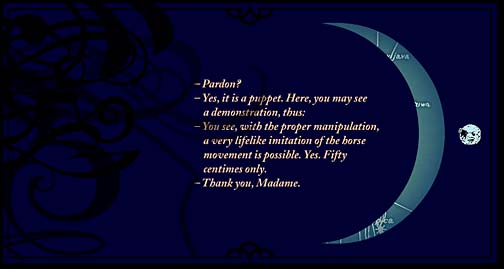 I won't belabor the point, but everyone, everyone, should absolutely get out and see Hugo. For reasons I won't get into, it needs to be seen at a Movie Theater, on a Big Screen. Don't wait for the DVD. See it in 3D or see it flat (although I will say that this is what 3D was made for, and Scorcese uses it better than anyone else ever has), but see it.

I watched it through a haze, with tears running down my face. I can't promise that you will have the same reaction, but then I feel intensely connected to the material for a number of reasons.

First, years before Brian Selznick published his wonderful book, The Invention of Hugo Cabret, upon which Scorcese based his film, I mined the same material for a short story. You can see it here. The animations and design that really bring it to life are by Farak Ulay. Please take a few minutes and check it out. It's not a long piece. You might want to wait until after you've seen Hugo, though. Spoilers ahead. See it, then come back and follow the link.

Among the very few critics who have actually panned this movie, one of them said something to the effect of "Scorcese shouldn't have waited until he was seventy to make his first Kid's Film."

I want to throttle that person. Hugo is anything but a Kid's Movie. It's for adults who can remember what it is like to be a child, but who have lived long enough to experience loss. And it's for young people, meant to turn a key and open a door in their minds that will allow them to explore avenues that lead, down crooked streets and narrow hallways, to places and people far away from the relentlessly contemporary.

Even  though I knew the details of the plot ahead of time, I was entirely drawn in to the deep mystery that this movie creates. Most people who see the film will not recognize the name of the man played by Ben Kingsley, but even if you do, you will not be disappointed in the way the fictional story folds itself in and around reality, like film through sprockets.

Just one more thing: Even here, in Hugo, Martin Scorcese has made a film that forced me to look away from the screen and to literally shake and cringe and squeeze into the bottom of my seat. I am genuinely afraid of heights. When you see it, you'll know the scene I'm talking about. In 3D, it was simply unbearable for me to watch.

This was a good ending to my birthday weekend which began with some friends coming over on Friday night for one of my Movie Nights.  As I've written before on this blog, I always do up a Full Program with a cartoon, serial and a comedy short before the feature. I served up some pretty good stuff: Betty Boop in Snow White, Buster Keaton in One Week, and episode one of Republic's 1941 cliffhanger, Spy Smasher. The Keaton was particularly fun. Watching Keaton all alone by yourself in front of the telly is one thing, but watching him where there are other people in the room and they are all laughing out loud in all the right places definitely adds an additional layer of enjoyment.

The feature was another movie about children faced with seemingly insoluble mysteries, Disney's 1963 The Horse Without a Head, featuring Jean-Pierre Aumont, Leo McKern and Herbert Lom. Also one of my first childhood crushes, Pamela Franklin as a spunky little girl who has a way with dogs. This slight little mystery is a charmer that's been a favorite of mine ever since I was five years old. Disney has never formally released it to the retail market, but there are copies of their "film club" DVD out there if you know where to look.

E___, a former boss and longtime friend, who came to my mother's memorial service, got to see my house for the first time, and commented that I've done well at making it home. Thanks. I think so.

So, yes. Much, much better than my last birthday, which you can read about here on the blog. Life in general has improved a whole heckova lot since then, and who knows? Maybe, like the characters in Hugo, I won't be broken forever.