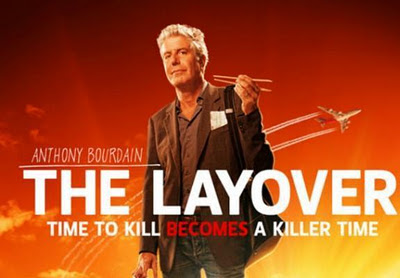 It must be nice to be Anthony Bourdain. Of course, it took a lot of hard work to get to where he is now, but Now seems to be pretty danged good for the guy. I'd much rather be Anthony Bourdain, traveling the world and dishing out Experience to punters like me, than, say, Gordon Ramsay, who still works like a dog trying to turn around the lives of Clueless Restaurateurs who would have been better advised to become paper-hangers.

My first thought was that Bourdain was most similar to a Super-Powered blogger who, unlike bloggers, actually provides information of value -- but, really, am I ever going to make it to Singapore or even South Beach?  How can the information possibly be of actual value to someone like me, marooned on my own virtual Desert Island? The most telling moment so far in Bourdain's new series The Layover comes when he's chowing down on Deluxe Dogs and Deluxe Coctails in an exclusive little hole-in-the-wall, and he looks straight into the camera and says, "You're not getting in here. It's pretty much certain that you're not getting in here."

So, by definition, the only real value in Bourdain's shows lies in providing masochists and armchair travelers like me with a bit of vicarious punishment. Granted, I wouldn't eat some of the things that he eats, but then, as a likely case of Asperger's, my palette is almost notoriously bland. I didn't graduate to the milder forms of Mexican food until I was in my forties. It doesn't mean that I can't enjoy learning about Street Foods of The World on an intellectual level.

To be able to go anywhere and eat anything that's put in front of you, to be relaxed enough and comfortable enough in your own skin to speak confidently to absolutely anyone, that must be a Wonderful Thing.

I've traveled enough to know that travel is exhausting, fraught with difficulties, and sometimes dangerous. So if Mr. Bourdain sometimes looks pained or tired, that's to be expected. I don't feel sorry for him. He's like James Bond without the running, punching and shooting. Sounds like a Perfect Life to me.