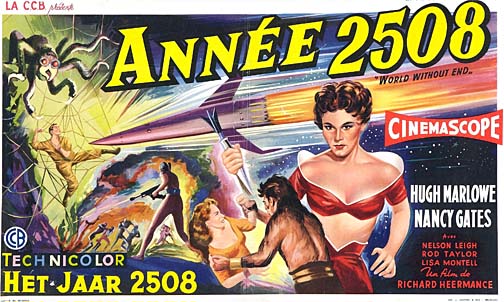 . . . was the title of the vintage SF picture I watched last night. It came to me as part of a two-disk set; I really only wanted Ray Harrihausen's The Beast from 20,000 Fathoms, but for under ten bucks I got that, Them!, and two other pictures I'd never heard of before.

Made in 1956, this programmer (shot in color and cinemascope for no good reason, as there is no visual excitement to the thing whatever, unless you count a large and patently rubber spider that gets tossed onto the actors at one point) is just about as wonky as they come. It operates under the exact same premise as the much later (and much better) Planet of the Apes: a group of astronauts get thrown into the future and land on an Earth devastated by nuclear war in the year 2508.

Instead of apes, they find a horde of one-eyed brutes living on the surface, and a highly civilized and refined culture living underground, very Buck Rogers if you ask me.

But get this: The men are all weaklings and Olde Fartes in Flash Gordon headpieces, while the women are all 1950's pin-ups in miniskirts and pedal-pushers. And because they're sick of their attenuated, distant menfolk, they're all over the guys from the 20th century!

That's right -- these guys have landed in the middle of the perfect mid-sixties sex fantasy. And because there's a lot of running and punching and fighting and shooting to do on the surface, it's the best of both worlds for Joe Virile.

Although this is not bad enough to fall into the category of "So Bad it's Good," it is bad enough to be worth a chuckle or two, and oddly enough I did not find myself falling asleep on it. Go figure. The only name I recognized was Rod Taylor, and he didn't even get top billing.

At the end of the picture, the guys from the 20th century have made their point about flexing muscles and returning to the surface, and the Olde Fartes from the undercity all take off their Flash Gordon headgear to show that they are ready to become Real Men and help slaughter all those one-eyed brutes.

I'm not convinced that this gesture is going to be good enough to get the women back.