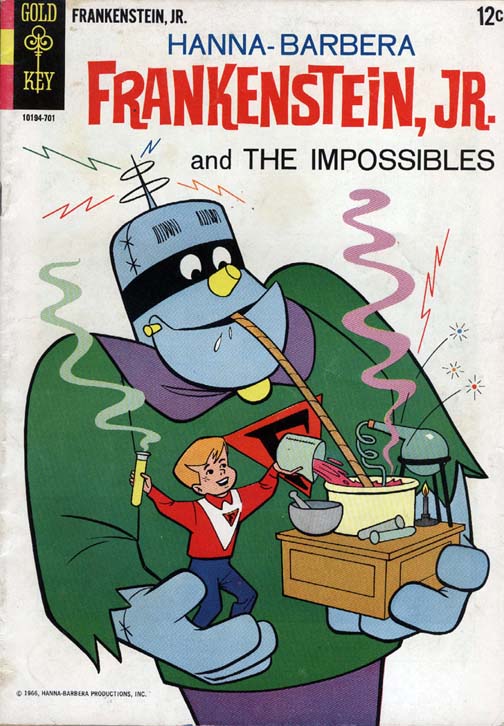 With all the time I've logged just being sick this winter, you'd think that I'd have something profound to say about illness by now. But no. It's just something that robs you of your time and life. And every time it came back around to hit me this season, it seemed to get worse. It's been an entire week this time, and I'm still not completely over it. I tire so easily, and still seem to need a lot of extra sleep.

The good and soothing thing that happened this week that I'd rather write about was that a little bit of my past arrived in Wednesday's mail. The mid to late '60s were the golden age of TV animation, and three of my favorites finally snuck onto DVD last fall without my noticing. If my friend BC hadn't mentioned it, I might never have known the joy of being reunited with my televisual pals The Herculoids, Mighty Hercules and Frankenstein Jr.!

Mighty Hercules was, I believe, a syndicated show from Trans-Lux studios, the same company that created the '60s version of Felix the Cat -- the one with the magic bag. Trans-Lux were no Hanna Barbera, and the animation was quite limited. The main villain was always Daedalus (who sounds exactly the same as Felix's nemesis The Professor) , so the mythology wasn't at all right, either. The stories were short and swift, and usually had something to do with Hercules losing his power ring. My clearest memory of the show is the theme song, and the way Hercules grew into his logo at the end. I never knew the lyrics, but when I popped the DVD into the player I was pleased to hear that my recall of the tune was exact!

Mighty Hercules  was not terribly good. But I was quite young when it was on the air. In the main, I remember watching it during the summers that we spent at Lake Vermillion. Perhaps that's the reason why I remembered it so fondly: those were happy days.

Frankenstein Jr. and The Impossibles came on the year that the family moved to Maine, and I remember feeling quite traumatized at the notion that the TV stations would be different. What if Frankenstein Jr. wasn't on TV in Maine? This was too terrible a thought to endure.

Hanna Barbera thought that the stars of the series were The Impossibles, a trio of superheroes who were also rock and roll musicians and looked vaguely like "mod" versions of the Three Stooges. I knew otherwise! The real star of the show was Frankenstein Jr.! Unfortunately, the studio's inability to see this meant that there were two Impossibles cartoons to every one Frankenstein Jr. This was perhaps my first lesson that the universe is unjust.

Now that I see it again today, I realize that Frankenstein Jr. was just Hanna Barbera's gussied-up version of Jonny Socko and his Giant Robot, and not the terribly original concept that, as a kid, I thought it was. Oh, well. I still love the schtick and the usual great design work that H-B always brought to their projects (the villains, especially, always looked really interesting, even if all they ever did was shout "I've got you now, Space Ghost! AhhhHAHAHAHAHAHAHA!").

The Herculoids was different. The human family at the heart of the show weren't the stars. The stars were their fantastic pets. There was a dragon that shot energy bolts out of both his eyes and his tail (I'd like to know how he managed that), a giant Rock Gorilla, an eight-legged triceratops-like thing that could shoot blobs of lava out of its horn, and Gloop and Gleep: ghostlike and jellylike, able to take on any shape or stretch like Reed Richards.

I remember my mother complaining about the noise level of The Herculoids, and she was right -- it was a very loud and noisy show with most of the dialogue consisting of the dragon screaming (poor Mike Road!), the rock ape and the lava-shooting, eight-legged triceratops roaring at the top of their lungs, and Gloop and Gleep making their weird nattering sound (poor Don Messick!). The music, like all the music on H-B's dramatic shows, was loud and urgent, and there were constant explosions, whooshing and pounding. Twice every week, someone would unwisely attack the Heculoids, or they'd get into some kind of a jam, and twice every week all the pets would come charging to the rescue, screaming and roaring.

I loved this stuff. Gloop and Gleep no doubt influenced my own character, Sludge, in my Quirk comic strip. It was just great to watch these fantastic pets kicking villain's butts all over the screen. Sometimes the villains ended up in tears. Well, I guess I would, too, if all my evil plans were foiled and I got my butt kicked by a giant rock monkey.

I'm so glad to have all three of these shows back at last. Not that I'm ever far from being a little kid inside, it's a short trip, but the dangers of adulthood are so thick around us that it's worth going there every once in a while. I could definitely use my own giant robot or pets like what The Herculoids have. No one would argue with me. That's for sure.

Email ThisBlogThis!Share to TwitterShare to FacebookShare to Pinterest
Labels: past things, television