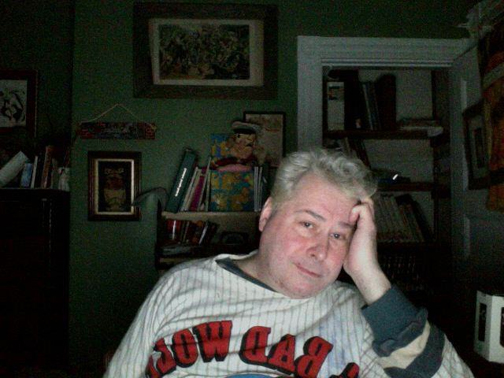 So here I am -- with my hair More Or Less in its current state of Artificial Color.

Here's the story I want to tell you:

The other day, my Boss's Boss, a person who, before I actually knew his name, I referred to simply as "Scary Bald Guy. . . "

-- and get this . . . when he came in during the construction of the New Store looking for my boss, and I said that I'd tell her he stopped by. . . my message to her was, "There was a Scary Bald Guy asking for you --"

-- she ABSOLUTELY knew who I was talking about!

The other day, on his way out from a meeting with my boss, my Boss's Boss, hereafter known as Scary Bald Guy, asked . . . in what I must say was kind of a Mocking, Demeaning way . . . "How's the hair color working out for you?"

I replied, politely, "Well, I'm still not sure that I'm going to keep it."

If my hormones had been up and my ballocks had been flaring, my response WOULD have been:

"Yah. Well. At least I HAVE hair to color.

The fact that what I actually said was, politely, "Well, I'm still not sure that I'm going to keep it" -- THAT'S the battle that I actually won!

Email ThisBlogThis!Share to TwitterShare to FacebookShare to Pinterest
Labels: Big Brother, on the job