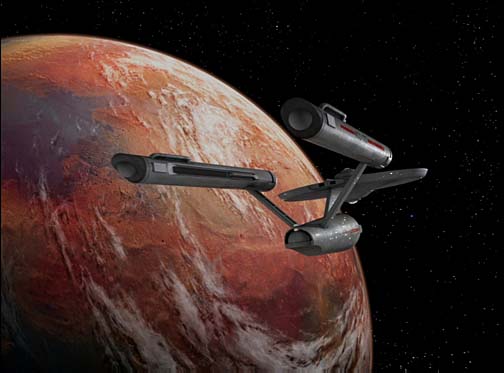 Last night I watched J.J. Abrams reboot of Star Trek for the first (and last) time. I have to admit that on one level, I couldn't take my eyes off it: in much the same way that you can't possibly stop looking at a train wreck when it happens right in front of you.

The most basic and obvious reason that I hate this movie is: DeForrest Kelley is dead, Jimmy Doohan is dead, Gene Roddenberry is dead, and here is Leonard Nimoy, playing Spock most likely for the last time, looking like death warmed over.

Meanwhile, here are all these Babies, these new non-entity pukes, all laboring to copy what the Original Cast did so well and so easily. Of all the new cast, the only ones who make no effort whatever to imitate their betters are the actors playing Uhura and Scotty.

For the same reason that I never accepted the impostor Kermit that was installed after Jim Henson's death, I don't accept this impostor crew of the Enterprise, or this alternate history of the Star Trek universe. You can't just keep something alive by pumping hot air into it, just because you're not done making money off it yet. But that's my problem.. What's not my problem is, this movie is just plain bad!

Let's get the good stuff out at the way at the outset, so that I can feel free to knock this piece of tripe from here to eternity. There was one thing and one thing only that I liked about J.J. Abrams's Star Trek:: the production design. They found a way to make the original uniforms work on the big screen, and for the first time since the original series went off the air, Star Trek finally looks the way it ought to.

But that's where it ends.

My biggest gripe is the device that everyone else seems to love: this isn't even our Star Trek anymore, an alternate timeline has been created and the entire original series basically never happened. I've seen this trick used several times before, and it always strikes me as creative arrogance. Abrams doesn't want to be bound by any established rules, so he's just declared that the rules simply don't exist. Like Kirk rewriting the software of the Kobiyashi Maru test, Abrams has declared that the rules are now anything that he wants them to be.

And what he wants is crap. The first twenty minutes of this movie contains some of the most eye-rollinging dumb material ever to come out of Star Trek, and that includes the godawful movie that Shatner directed. Never mind the comic melodrama stuff surrounding Kirk's birth, although that's bad enough. Kirk has always been a cocky piece of work, but never the complete Pain in the Ass and Menace to Society that Abrams has drawn him as here.

Beyond that, I just don't buy Kirk, McCoy, Uhura and all the rest, all at Star Fleet together at the same time. I don't buy Kirk hitting on Uhura all the time, and Uhura throwing herself at Spock on the elevator while they're both still on duty. It's like Star Trek 90210.

I don't buy blowing up Vulcan and killing off Spock's mother just on a whim, just on a plot point.

And I don't buy turning Star Trek into Raiders of the Lost Ark, into an Action Movie. Star Trek is not and never was about car chases, barroom brawls, things exploding everywhere, death drops, shootouts in space or big CGI monsters trying to eat people. Abrams can't seem to hold the camera still even when it's not even a bloody camera, even when it's a CGI shot of the Enterprise! Star Trek is supposed to have a brain -- but you wouldn't know it from this lobotomized, cannibalized monster. All it cost me was my time, and even then I was cheated.

Email ThisBlogThis!Share to TwitterShare to FacebookShare to Pinterest
Labels: movies, past things, television