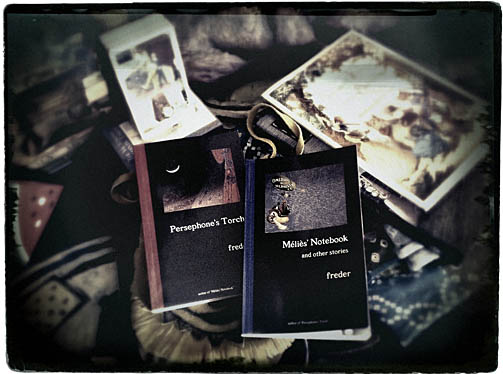 My finished copies of the new book arrived today -- opening that box was a real Magic Moment. When I worked as a typesetter for Thorndike Press years ago, I used to eagerly look forward to that day of the month when the finished books came in, not just because it meant Free Books, but because I wanted to see how my designs had come out, wanted to hold in my hands something that I had created out of thin air. I took a lot of pride in the books that I designed and set; I never looked at a book as just a collection of words, but as an art object with a personality that’s only partly made up of its words.

I still feel that a sympathetic design shows some feeling for the book’s contents, that it welcomes a reader into the work and sets the stage for the author to do his work. You want to create an atmosphere for the person reading the book. A lousy design and typesetting job can ruin a perfectly good novel, and by the same token a mediocre novel can still be worth owning if it looks and reads well. To this day, I’m convinced that “my” edition of Conan Doyle’s The Lost World is the best one ever.

So when I had the chance to typeset and design my own books, I knew that I wanted to create something unique, something that looked as well as it read, something that had a personality of its own and didn’t look like everything else on the stands.

As many times as I’ve done this, putting a book together in Photoshop and InDesign is like playing. I can never think of it as being real until I see a physical copy of it -- and then I can look at the thing almost as if I’d never seen it before, as if it was the work of someone else.

Seeing my own books come out of the box comes with a double-barrel of emotions, good and not so good. It’s unbelievably validating to hold in my hands something that I made from top to bottom, something that I can put on my bookshelves that looks and reads as well as anything else that it might be shelved next to. For the very first time in my life, I begin to feel like I’m not a completely worthless person.

But it takes all the joy out of the thing to think that Mom’s not here to see it. She died knowing me only as a drunk and a failure. I can publish books from now until kingdom come, but I’ll never be able to change that.