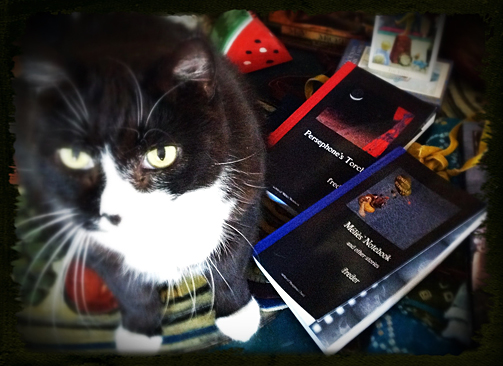 Other folks get sexy women in low-cut gowns to model and show off their wares... I get "puthyquaths" to do the job. I hadn't intended that Pandy Bear should look quite so... threatening when I asked him to pose for the picture (he seems to be saying, "Buy these books or I'll step on you!!"), but with quats you take what you can get. I originally tried to get one of my other feline roommates, Whitey, to do the modeling job... but man o man -- try to get that guy to hold still long enough to snap a photo, any photo! "Never work with children or quats..." I can confirm the latter. I did finally get a couple of excellent pictures of Whitey, which I didn't have before, him being the most elusive of felines, but getting him and the books in the same frame proved to be an impossible task. That was when I called in the much more mellow Pandy Bear, who'd been watching the whole process anyway. He thought the books were a pillow and had to loll all over them. Which might have been a good endorsement if I'd been able to get a decent shot. But no. In the end, even Pandy lost patience with me and blew the scene... and I had to make do with what I could get. Hardly one of those models you see on The Price is Right. But, y'know, maybe better suited to the product...

All of this is by way of announcing that It's Here, It's Here! Méliès' Notebook and Other Stories, the companion volume to Persephone's Torch, is out in paperback and available now through this site, soon through all the other online retailers and before very long at your very own local indie bookstore (which you should always think of supporting first).

Opening the box containing the printed proof was a real Magic Moment. The more so because it's not just something that I've written, but a book that I set, designed and illustrated from top to bottom, and to see something that you made from scratch like that, something that you assembled out of thin air taking shape in the real world... it's more satisfying than just about anything you can name. Yes, even that.

But everything leading up to this moment was the easy part. Now -- I hope that some of you out there will take a chance on me and give these books a try. Here's the thing. Stephen King doesn't need you anymore. Neither do J. K. Rowling or Louise Erdrich or Neil Gaiman or John Grisham or Anne Rice and I'm not comparing myself to any of those people, I wouldn't dare to put myself in their league. What I'm saying is, I need you.

None of those people got where they are today without people like you giving them a chance, allowing the books into their lives, and then, if they liked those books, spreading the word to other like-minded folks.

It takes readers. I know you're out there. I know that at least some of what I've typed here has connected with at least some of you, and when that happens it's a lot like opening that box to see the proof, it's magic, something I'm in awe of and grateful for. This blog has been a big part of saving my life. Now, I don't like it, but I have to ask for more. If you want to make a difference to someone who is really making an effort to turn his life around, now is your chance.

I may type a lot about "Duck Soup Productions this and that and blah blah blah--" but that's just me in my little playground trying to make myself feel like I've actually accomplished something. Likewise, the only reason I use a "nom de plume" is because none of you would be able to pronounce my last name; it's kind of hard to encourage word of mouth when you've got a name that sounds like a Swedish back road.

I've given this my best shot, and tried to make books that I hope will connect with some folks. If it doesn't work -- I'm screwed. Not to put too fine a point on it.

So -- if you can find it in your heart to give me and my books a chance, you won't find any writer more grateful. Just sayin'.