Down in the Old Aisles 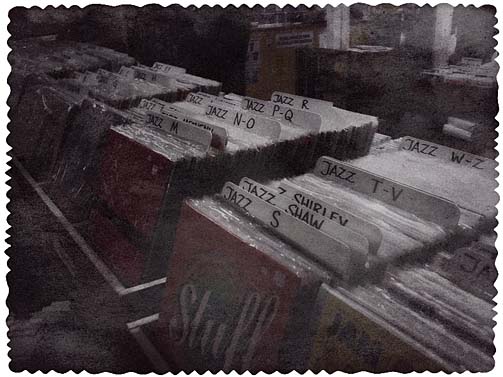 Things change, you make gains large and small, you suffer losses equally large and small. There’s nothing new or profound in that statement. It’s just one of those things that you’re forced to take notice of now and then. As you get older, you notice it more and more. If you’re lucky, the losses are less significant than the gains.

What brought this on? Do I need an excuse?

As I flip through my old collection of vinyl LPs, converting them to crispy new electronic formats, change is “writ large” on nearly every album cover, and every album or single tells a story that goes well beyond the songs or the comedy patter vibrating between the grooves.

I guess the biggest thing that’s been lost in the digital and marketing revolution is the sense that every record is a little brick of history. I remember where I bought each and every one of these records, and the circumstances surrounding the purchase. The records become a photo album in my mind.

I got my copy of David Bowie’s Station to Station in a little New York City record store, one of those dark hole-in-the-wall places. I’d just read about it in the Times, and I was out wandering around, and in those days I went into every new record store that I found. The girl behind the counter looked like a young Bohemian, and she gave me a smile and a look that said she agreed with my taste in records. A normal guy would have chatted her up, I suppose, but as I now understand, Asperger’s made that impossible for me. I just bought the record and have remembered her smile ever since.

My Dad had taken a job in New York at that time, and I was visiting him. For a while in the late ‘70s, I got to New York a lot, both alone and with the rest of my family. I have many little memories and stories like the one connected to Station to Station, and sometimes one memory is a hook to drag another along, which hooks another, which hooks another...

I got a used copy of The Moody Blues album The Other Side of Life at a record store in Boston. My friend BC was there, and even though The Moody Blues is not his cup of fur and then some, he urged me to get it because we both knew I wouldn’t find it at home for that price. This was at a time when, maybe once a year, maybe twice, I would join a small pack of my friends and make regular pilgrimages to Boston, just to get out of Maine and get a taste of Civilization. The internet was not yet even a gleam in Al Gore’s eye, and the big-box bookstores (one of which is now defunct) had yet to move into the state, bringing civilization with them, for a time. We had regular rounds that we made in town that included the great and nifty (and also now defunct) Avenue Victor Hugo Bookstore, and Tower Records (where I picked up Jefferson Airplane’s Surrealistic Pillow, the only album by that group that anyone could need), and Wordsworth out in Cambridge, who stocked imports, among several other great book and record stores, especially including one of the latter called “In Your Ear!” that stocked a great selection of vintage vinyl and bootleg albums, at reasonable prices. Now, whenever I see their sticker on one of my record albums, I think back on those fun trips to Boston with the guys. As I write this, I note that The Brattle Theater -- where I saw Warner Brothers cartoons on the big screen for the first time -- is running Ninotchka tonight. Oh, Ninotchka, Ninotchka... once you get started down Memory Lane you never know where the little offshoot avenues will take you.

And so now today it seems like the stories attached to each album are at least as important as the music they contain -- sometimes more so! They all occupy specific locations along my personal timeline, and have the power to draw me back along the corridor to places and people that no longer exist. For that reason, even after I have them all duplicated I’ll never part with them.

Buying music today is nowhere near as memorable. Nearly every “album” that I’ve bought in the last six years, I’ve done so while sitting right here in this chair at this keyboard. The music shoots down the internet pipeline and into my computer.

The good part is, I don’t have to drive all the way to Boston to look for obscure used books and music that can’t be found in local stores (record stores are pretty much a vanished breed now, anyhow), and then take my chances on what I’ll dig up. It’s all right here in front of me: if I think of something, my fingers do the walking and no matter what it is, I can pretty much find it somewhere and have it delivered to my doorstep. In a purely cultural sense, life in the age of the internet is almost unbelievably richer than it ever was in my “formative years.” I have more access than I know what to do with, and more culture of various kinds than I have the time to digest. And I have made some wonderful discoveries, especially recently. More on them in another post.

That’s nothing to snuffle at. But an MP3 download doesn’t have the same kind of intimacy or impact as one of those big-ass vinyl record albums with their covers that gave designers and the writers of liner notes what is today an almost inconceivable amount of real estate. The music is just as good, but it’s solitary, and no larger than itself: it’s just music, lacking the subtext of memory. I’ll never look back on an MP3 download and remember where I was when I made the discovery, when it first revealed itself to me out of the stacks of other records, and I lifted it out, held it in my hands, turned to the person or people that I was with and said, “Hey! Look what I found!”