Look Ahead Into the Past 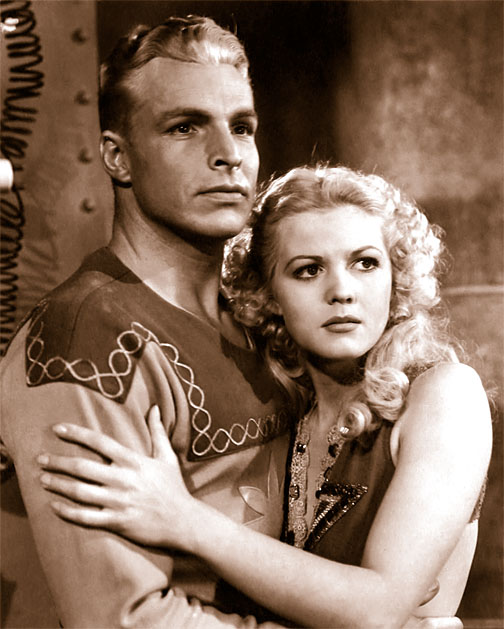 My friend BC rode up on his white horse and offered me a real, cash-money, one-off writing job earlier in the week. My brief: to write about the Flash Gordon serials for the (I believe) second volume in The Library of American Comics' reprint of the original comic strip.

You should check out their books, by the way. Not just first-class, but world-class, definitive editions of the great classics of the genre.

Well, I was all over that offer, let me tell you. But my heart sank when I sat down to begin the research and discovered right away that such an article already exists, and is far better and more informed than anything I could produce.

So that was that. For the exact same reason I found myself unable to write about The Life and Death of Colonel Blimp, which TCM ran on Thursday night. The following day I gave it the old college try, but my piece didn't begin to do the justice to the picture that Roger Ebert's article about it does on his website. I don't believe in retreading when something perfectly adequate already exists on the subject.

The only thing left that I could possibly do with Flash Gordon is filter it through my personal perspective, and I've already done that. Twelve years ago.

But it does give me an excuse to post that old piece here. So there you go. It appeared in my own online litmag Millennium right around Y2K.

We can think of no better way to greet the future than by hauling out our video copy of the original Flash Gordon movie serial. Directed by Frederick Stephani from Alex Raymond’s all-conquering classic of a comic strip, this is to movie serials what The Wizard of Oz is to features: packed with gorgeous Art Deco style, a breathless story about well-focused characters in need, and a veritable boatload of wonderful (if not necessarily wonderfully talented) character actors to portray them.

Episode 1 of the serial opens with the Ultimate Y2K menace of all time: a mysterious planet rushing headlong on a collision course with the earth, causing atmospheric disturbances and mass repentance from New York to Delhi. Whilst bailing out from a passenger plane driven down by the storms, star athlete Flash Gordon (Buster Crabbe) becomes — ehm — closely acquainted with the lovely Dale Arden (Jean “ee-urp” Rogers). On making a safe landing the two are menaced by a crazed scientist bearing a revolver: the eminent Dr. Zarkoff, who proposes a desperate plan to save the Earth.

That plan carries the trio via Rocketship to Mongo, where the Merciless Emperor Ming (stock villain player Charles Middleton in his greatest role) agrees to spare our planet — proposing instead to take it over lock stock and barrel. Fortunately for us all, lust takes precedence over global domination, and Ming drops his plans long enough to force Dale into marriage with him. Thanks to intervention from Flash, Zarkoff, Ming’s daughter Azura and practically everyone else in the movie, the nuptials of Dale and Ming are continually delayed, and Earth is saved through sheer unrequited lust as Ming’s army pursues Dale and Flash through fifteen chapters of encounters with Shark Men, Hawk Men and tortures of every conceivable sort (including one delightfully surreal sequence in which the scantily-clad Miss Rogers is forced to witness the Hawk King’s dreaded display of the art of Shadow Puppetry). It is all truly bizarre, and truly wonderful.

It’s hard to imagine, in our softer times, that so much open lust and violence — including a disturbing fight between a shark and an octopus and Crabbe’s frequent half-naked bouts with grotesquely fanged wrestlers — could ever have been intended for children. There is a raw edge to the film, and an open chauvinism that would make NOW and Action for Children’s Television squirm and spit. But heroes and villains never came this big, either before or after Flash Gordon, and there’s a quality of dreaminess and surrealism on display that raises this of all serials to the level of high art.

Fashionable people love to scoff at Flash Gordon’s special effects, at the sparkler-shooting exhaust of the spaceships, and if photo-realism is the aim then they’re right to scoff. But seen as Art Deco contrivance, as design in action, the effects in Flash more than stand their ground today. They are part of the Grand Opera that isFlash Gordon, sputtering and fuming across the screen, in a Neverland of Floating Cities where men have wings and Virtue is its own reward.