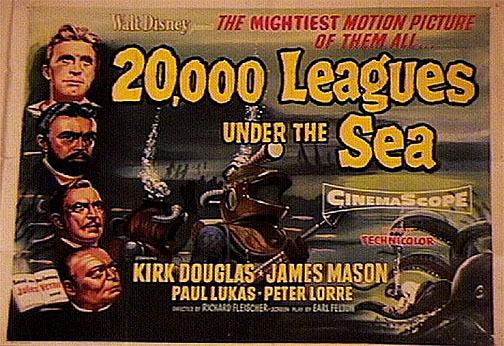 Like so many of the movies I've posted about on this blog, I'd seen 20,000 Leagues Under the Sea just once before, half a lifetime ago or more, and on telly -- which in those days meant cropped by nearly half of its screen image and cut by at least half an hour.

Even viewed under those conditions, it was a great picture, and easy to see why Chris Steinbrunner chose it as one of the handful of all-conquering classic films that he included in his book Cinema of the Fantastic.

I dislike the term "Steampunk" because it classifies and makes formulaic something that's been around for at least a century. But 20,000 Leagues is as steampunk as they come, baby, and probably the best filmed example of the genre. So much care went into it.

As per usual, Uncle Walt nearly bankrupted the studio making the thing. Uncle Walt didn't do things by halves. It must have driven his brother Roy completely bonkers, trying to keep the company financially sound while Walt was throwing money at (usually quite risky) ventures.

20,000 Leagues was already over budget by the time they got around to the squid scene. You all know this scene by heart, right? It's so very memorable, and holds up even today. But it was this scene that nearly brought down the whole company.

The DVD has, among its extra features, recently-discovered footage of the first, original squid fight, the one that was completely scrapped. Walt was embarrassed enough at its shocking ineptitude that he ordered all film and negatives of the scene to be destroyed, but it turns out that the entire production was being filmed on 16mm for use in a behind-the-scenes documentary on the Disneyland show, and this footage includes a glimpse at the original Giant Squid fight!

And oh, it is Gloriously, Comically Bad. It would have sunk the whole movie.

Against a red-orange sky, a bloated, tubby, orangey and very obviously fake squid is actually perched on the deck of the Nautilus, waving its tentacles manically, as if it has the DTs and is in need of its next dose of sailors. You can clearly see the wires at the ends of the tentacles. Poor James Mason looks mortified, as if this debacle might bring down his whole career. At one point he tosses the harpoon, and it bounces off the creature's ridiculously plastic eye. When Walt saw the rushes he came down to the director, Richard Fleischer, and said, "You're making a Keystone Kops movie here!" to which the frustrated son of Max basically said, "Yes, but look what I have to work with!"

When the bankers saw the revised scene as it was later finished, they had no qualms about coughing up another wad of money so that Walt could finish the movie and keep the studio afloat.

The Squid and The Octopus hereby receive my vote as the number one most repellant and scarifying creatures that inhabit this earth. Absolutely everything about them gives me the heebie-jeebies. I can NOT watch documentary footage of the things without covering my eyes and turning away from the screen. The way some people feel about spiders? Yah, that's the way I feel about octopussies an' squids! There's a scene in the original Flash Gordon serial that I can not watch. It wouldn't be allowed today. Basically, the second unit threw an octopus and a shark in a tank together and let them fight it out.

But the giant squid scene in 20,000 Leagues Under the Sea is great moviemaking, and the reason that it works is because Walt was purely matter-of-fact when it comes to mistakes: you don't wring your hands about it, you learn from it, regroup, do it again, and this time do it right.