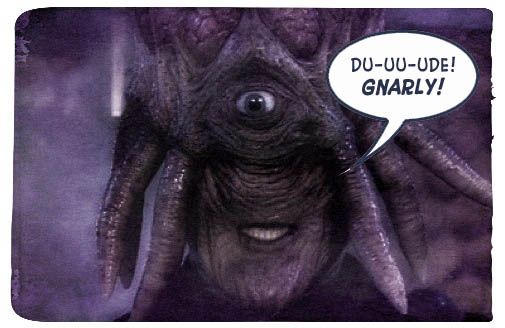 Into any television programme that runs for any length of time a stinker episode or three must fall — and as I work my way through a second viewing of the revived Doctor Who, it’s frustrating to note that while David Tennant is growing on me (although he is still my least favorite of the three “modern” Doctors), the series itself isn’t doing him any favors: especially in Season Three, which just seems to be ripe and rife with Stinker Episodes.

After a good start with the introduction of Martha Jones and her subsequent near-hookup with William Shakespeare, suddenly the season nosedives, and five whole episodes later it has not regained any ground.

It’s all gone very very Eric Saward / John Nathan-Turner — and as that was my least favorite era of the original series, maybe you can understand my dissatisfaction with this run. Saward was a horrible script editor, not to put too fine a point on it, and although Peter Davison was laboring manfully to bring us his Doctor, he was lumbered with some really just godawful scripts — and that’s precisely what happens here in Season Three to poor David Tennant.

“Gridlock” was bad enough. Aside from the funnish Welsh Cat-man, the only good thing about it was seeing the Macra again — and even that wasn’t much good. What are the Macra even doing there? How did they get there? What is their reason for being in this story? The Macra themselves cannot tell you, as they are simply Giant Brainless Crustaceans. So I have to look at it from the writer’s point of view, and it boils down to just two things: we put the Macra in there, on the one hand, just because some of the fans would go “Ooooh! Macra!” and on the other hand because it allows us to get away with a Dirty Joke: Yes, boys and girls, New York City has a bad case of The Crabs.

But if “Gridlock” was bad (and it was), the Dalek two-parter that followed it was even worse. The two words that come to mind are “lamentable” and “excreble.”

Bad enough that the Brits seem to think that everyone in N’Yawk runs around with an unbelievably exaggerated and farcical Brooklyn accent. But a working theater with a direct-access entry to the public sewer in its prop room? When has that ever happened? Humanized pigs or pigified humans as Dalek slaves? We are expected to feel Pathos at the plight of a half-transformed human pig — instead you want to point your finger at the screen, cover your mouth and chortle.

The Dalek Master Plan in this episode seems interesting enough, until you remember that Daleks hold humans in such contempt that not even the most forward-thinking and liberal Dalek would ever conceive of tainting their Master Race with human DNA. And, I’m sorry, the creature that ultimately results from this unholy union is just… well… stupid.

How does the Doctor survive the lightning blast that he absorbs atop the Empire State building? Lesser things have killed him in the past. Sure he’s got two hearts — but all that means is that he has two hearts to have a Heart Attack with after the lightning strike. Instead, he takes a little nap and wakes up a few minutes later just Perfectly Fine and Chipper and ready to carry on with the plot. The goose-stepping human Daleks are kind of low camp, and their sudden turn to rebelliousness just in time to pull the Doctor’s ass out of the fire is just too too Deus Ex Machina. And then, or course, they all have to be killed off because they’d simply cause too much Continuity Havoc if even one remained alive.

I cannot respect any writer who has so little respect for me.

Next up, “The Lazarus Experiment.” Okay, at least it doesn’t stink on ice the way the Dalek two-parter did, but it’s so bloody generic. It’s not Doctor Who. It could be Warehouse 13 or Torchwood or Star Trek: The Next Regurgitation. It could be “Insert Name of SyFy Network Program Here.” It’s nice that we get to meet Martha Jones’s family, and that long-time Who scripter Mark Gatiss (he started with the Big Finish audio dramas) gets a chance to act, but, meh…

“42”? Aside from having an incomprehensible title, it’s merely The Doctor Does Alien. When you’re trying to recover from Lousy Crap like “Gridlock” and “Evolution of the Daleks,” this bit of generic boredom is not going to help you.

That’s as far as I’ve gotten, but there is More to Dread coming up: I didn’t like Davies’s reintroduction of The Master the first time through (The Master as a kind of Donald Trump filtered through Iggy Pop? I don’t think so), I can’t imagine a second viewing is going to make me like it any better.

About the only thing keeping me going at this point is the knowledge that Stephen Moffat’s absolutely brilliant “Blink” is coming up. That episode, all by itself, makes up for an awful lot. It’s not just brilliant Doctor Who: it’s one of the most outstanding hours to come from any TV drama, ever, in any genre. And it blazes the way to Moffat taking over from Davies as the show runner, which is the best thing that happened to Doctor Who in some considerable time.